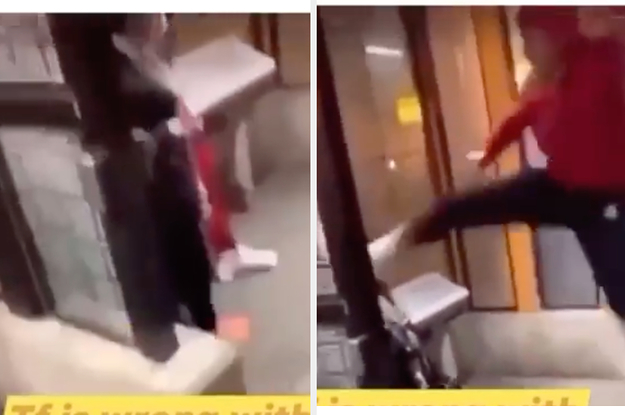 "The million dollar question is why someone would do something like this. I am not sure we will ever comprehend it," said an official with Metro Transit in St. Paul, Minnesota.

Officials in Minnesota have arrested three teens after a viral Instagram video showed them allegedly taunting an Asian woman who was alone at a metro stop before kicking her in the face, then running away, laughing.

In the 15-second clip, three black teens are laughing and moving around the woman as she stands alone against a bench under the rail stop awning. She edges away from one of them who comes and stands next to her as the person recording the video can be heard chuckling, "you won't, you won't," over and over again. His friend then approaches the woman, jumps into the air, and kicks her hard in the face before running away.

"Everyone I talked to who has seen this video who thinks rationally is rightfully disgusted by what they see and the biggest question you come away with is why anyone would do this," he said.

As the video began to spread across social media Tuesday, people called in to report the assault. Metro Transit authorities immediately launched an investigation, Padilla said. Using details from the short clip, like the wall background, investigators identified the station and time the attack occurred and then scoured their own video camera recordings for additional information.

Two of the suspects are 15 years old and the third is 14, Padilla said. He did not know the relationship between the boys, but noted they each lived in a different town: Maplewood, Minneapolis, and St. Paul.

Officials also spoke to the victim, who lives in the Twin Cities metro area. Padilla said that the woman had not filed a police report, nor was she in the hospital when authorities went to see her.

One of the most puzzling aspects of the case is why the group of teens and the woman were on the platform in the first place, Padilla said. Over the past few weeks, the department had "trimmed service back" because of the coronavirus pandemic, first cutting trains at 11 p.m. and then stopping all rides at 9 p.m.

"They were there three and a half hours after [9 p.m.] and the next train doesn't start up until 6 a.m., so one of the things we hope to show is what everyone was doing there," he said, adding that it had been "public knowledge" for some time that train schedules had been shortened.

While he declined to comment on whether the assault seemed racially motivated, Padilla did acknowledge the incident was a rare and "unique situation" given that it occurred "during this pandemic when people are supposed to be at home and there's not train service there."

"The million dollar question is why someone would do something like this," he said. "I am not sure we will ever comprehend it."

Reports of racially-motivated attacks and hate-fueled harassments against Asian Americans have spiked as a result of the novel coronavirus, which originated in China, according to the Asian Pacific Policy & Planning Council. The organization launched an official STOP AAPI HATE center on March 19 to document the discrimination.

By April 3, the group had recorded more than 1,100 reports of verbal harassment, shunning, and physical assaults related to the virus. At the end of the month, that number reached close to 1,500. In New York City last Sunday, a man tried to forcibly remove a nurse off a subway car, calling him a "Chinaman" and that he was "infected," NBC News reported.

“The volume of incident reports continues to be concerning. But, beyond the sheer numbers, we hear the impact of hate in the pain, humiliation, trepidation and fear in the voices of AAPIs today,” Manjusha Kulkarni, the council's executive director, said in a statement about the data. “This is a widespread problem with significant ramifications for our communities.”