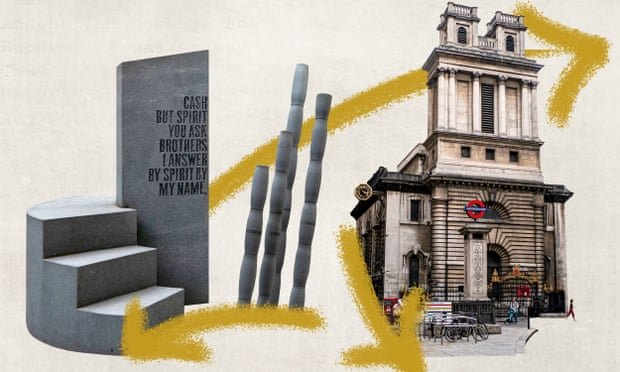 A slavery tour of London: the guided walk laying bare atrocities of the past

From a kneeling slave at the Royal Exchange to the coffee house that was at the heart of the trade, a new tour is revealing a side of London that is often glossed over

Tucked down a narrow alleyway in the City of London, hidden in the medieval muddle of courts and backstreets, stands an ornate terracotta-fronted pub. Beneath a moulded frieze and a ye olde Dickensian lantern, a plaque declares that this was the site of London’s first coffee house, opened in 1652.

The Jamaica Coffee House was founded by Pasqua Rosée, the Armenian servant of a coffee merchant, and frequented by the likes of Samuel Pepys. What the plaque fails to mention is that this little establishment was also at the very centre of the transatlantic slave trade.

“A huge amount of the City of London’s wealth came from slavery, but the connection is mostly invisible today,” says tour guide Ildiko Bita. To redress this situation, Bita and her group, Six in the City, have put together a revealing walk, titled Slavery and the City.

Part of this weekend’s Open House festival, the walk unpicks the intimate connections between the City’s Lord Mayors, priests, financiers and the highly profitable atrocities of the slave trade.

“Most walking tours tend to gloss over anything a bit difficult and end with funny anecdotes,” says Bita. “But this one is different. We’re going to look the uncomfortable aspects of the past squarely in the eye.”

The quaint backstreet pub, site of the former Jamaica Coffee House, is one of the many eye-opening stops on the route. Where usually a guide might regale you with stories of the birth of London’s coffee culture, or charming details about the facade, Bita paints a graphic picture of a place where sugar plantation owners would meet with slave ship captains to broker deals over the fate of hundreds of enslaved Africans, thousands of miles away. 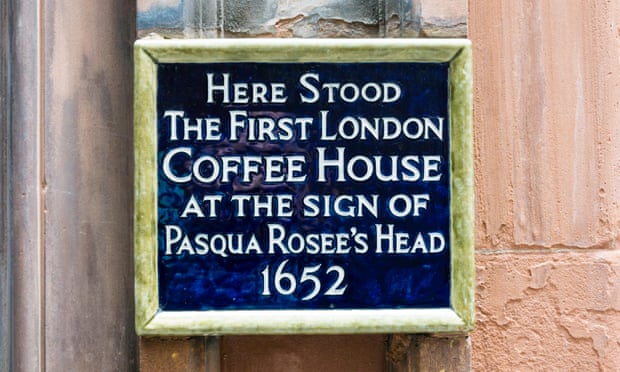 No mention of the slave trade … the plaque on the site of the first London Coffee House.

Adverts offering rewards for runaway enslaved people were frequently posted on the walls of the coffee house, while news of the latest mutinies and shipwrecks in the Caribbean was read out to enrapt punters. “Went away from his master,” begins a plaintive advert in an edition of The Post Man newspaper from January 1718. “

A Negro boy named James … whoever brings him to the Jamaica Coffee House in Cornhill shall have ten shillings reward.” Another article records news of an insurrection in St Domingo in the Caribbean, first reported in the coffee house: “The Coloured People have risen, and subdued the inhabitants with dreadful massacres.”

Just a few metres from where the slave traders and sugar tycoons mingled, those plotting their downfall were also gathering. Through a covered alley, past the George and Vulture, one of Dickens’ favourite pubs, we reach a small yard facing the back of a nondescript office block.

It is the site of a former Quaker bookstore and printing shop where the abolitionist movement first began – not that you would know based on the service entrance there today.

On 22 May 1787, the print shop at 2 George Yard hosted the very first meeting of what would become the Society for Effecting the Abolition of the Slave Trade.

The chain of events begun that afternoon, wrote French diplomat Alexis de Tocqueville years later, was “absolutely without precedent … If you pore over the histories of all peoples, I doubt that you will find anything more extraordinary.” 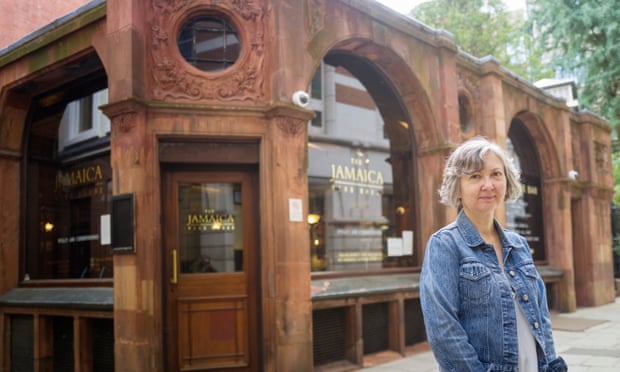 ‘We’re looking the past squarely in the eye’ … Ildiko Bita outside the pub where the Jamaica Coffee House once stood.

James Phillips’ printing house published the famous diagram of the Brookes slave ship, starkly depicting 454 enslaved people packed together like sardines, which went on to be reproduced in countless newspapers and pamphlets, instilling the true horror of the Middle Passage in all who saw it.

But if you visit George Yard today, you’ll find no statues or memorial plaques, just an empty stone courtyard dotted with ventilation shafts.

The Slavery and the City walk is one of several new additions to London’s Open House programme this year, many of them geared towards widening the scope of the festival and broadening its audience.

Running for almost 30 years, the annual weekend bonanza typically sees around 250,000 people welcomed into buildings that are normally closed to the public, every September bringing the spectacle of largely middle-aged white couples, thermoses in hand, queueing around the block to get into the Gherkin or have a peek inside a Barbican flat.

“Architecture is often a very white male-dominated space,” says Nyima Murry, one of the two new assistant curators appointed to Open House in July, tasked with diversifying the programme.

“We’re trying to make space for others, with events that tackle everything from colonial histories and how race intersects with cultural spaces in the city, to workshops on climate action and food waste.” 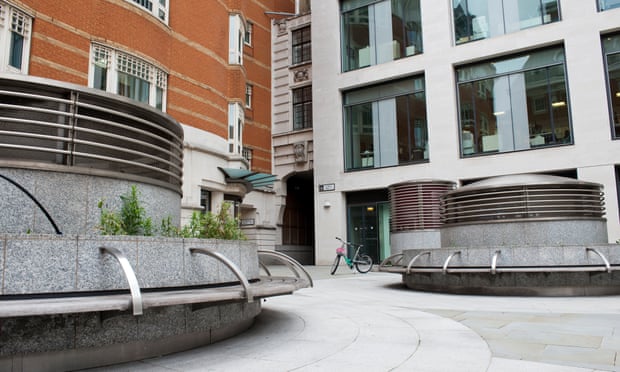 Where abolition began … George Yard in the City of London.

The coronavirus pandemic has meant that a festival predicated on encouraging thousands of strangers to flood into normally closed-off buildings for a nosey around has had to have a rethink.

A large number of sites will still be open, with social distancing in place, but the programme has also been supplemented by a range of films and virtual tours that will take place online and via Zoom.

A pre-recorded series of 33 building tours includes films of Tooting Bec Lido, Ernő Goldfinger’s Glenkerry House housing co-operative and the self-built Walter’s Way in Lewisham, with stories told by their residents and users.

There are cycling and walking tours, too, with one strand looking at radical housing projects, showcasing developments built in the heady days of decent space standards, which would have probably been more bearable places than most to spend the lockdown.

And for those who can’t get out into the city (or who are sick of Zoom), Open House is planning to bring the city to them, via a range of cardboard model buildings to cut out and make at home.

But the chief thrust this year is on opening up the festival to those who might not have considered going along before, with events like a walking tour of the old Chinatown in Limehouse and a symposium with the Stephen Lawrence Charitable Trust on expanding the definition of heritage.

Much of this new focus has been steered by Phineas Harper, who took the reins of Open House in March, just as the lockdown began. “It has always been a popular festival, but perhaps we haven’t really challenged people when they get there,” he says.

“This year we’re trying to be a bit more provocative and politically engaged. Ultimately, it’s all about making London a more equitable city.”

Another innovation has been to rethink the usual printed pocket guide as a proper book, edited by Owen Hatherley. The Alternative Guide to the London Boroughs is an entertaining anthology of unexpected personal stories, ranging from Daisy Froud’s poetic tales of the Harrow Civic Centre to Aydin Dikerdem’s colourful piece on Stoke Newington’s history as a hotbed of radical Turkish politics, before the brunching classes arrived.

Back on the Slavery and the City tour, we come to Bank junction, where the classical portico of the Royal Exchange looks across at the Bank of England, with the glass penthouse of the Rothschild headquarters peering above Mansion House in the background.

Look closely at the pediment of the Royal Exchange, and you see an African enslaved man kneeling in a tableau of imperial commerce – carved more than 30 years after the slave trade had been abolished. 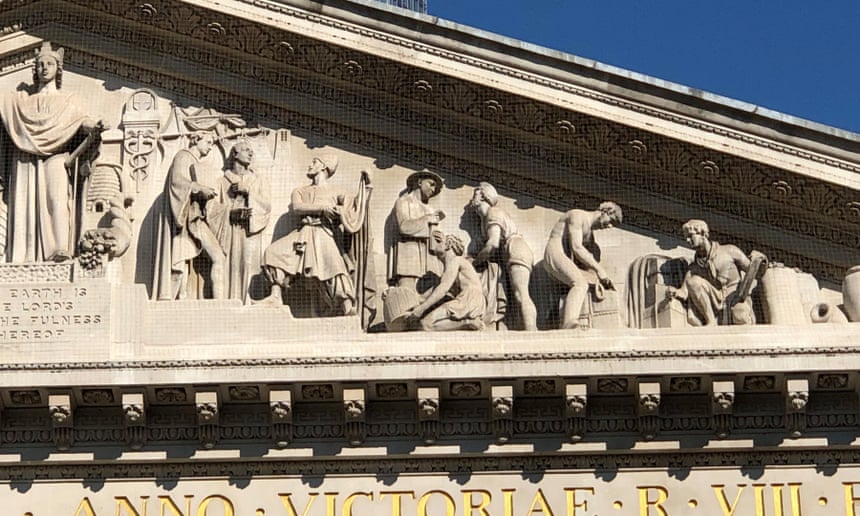 Easy to miss … the pediment of the Royal Exchange, which features an enslaved African man kneeling.

Meanwhile, the looming Rothschild presence is fitting: the banking family organised a £15m loan to compensate slave owners when the trade was outlawed, with the government adding an additional £5m.

The total sum represented 40% of the government’s yearly income in those days, equivalent to hundreds of billions today – a debt so huge that it was only paid back by the British taxpayer in 2015.

And finally there’s the Bank of England, which issued a formal apology in June this year for its “inexcusable connections” with slavery, after it was found that at least 25 of its former governors and directors had been owners of enslaved people or were linked to slave trading.

The bank says it has commenced a review of its collection of images to ensure none of the figures with slavery connections remain on display.

“The question is what other meaningful action can big institutions like this can take,” says Bita. “I’m not sure that putting the pictures in the cellar is enough.”