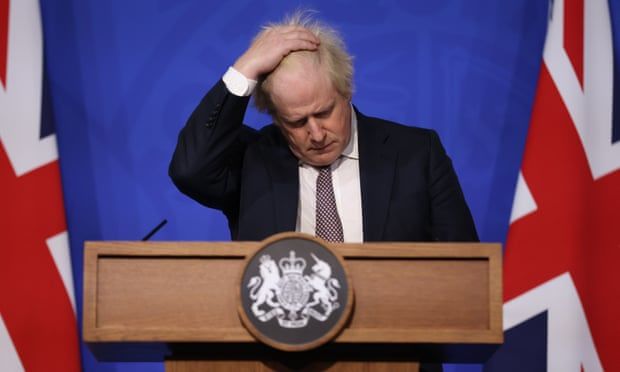 A lawbreaker who could win again: the case for and against ousting Boris Johnson

As Boris Johnson faces a no-confidence vote, the spin war over his future was in overdrive on Monday, with opposing camps setting out their stalls. Rebel Tories circulated a note giving reasons to dump the prime minister. And by Monday morning, the chief whip, Chris Heaton-Harris, had sent round No 10’s own note on the case to keep Johnson. These are the key arguments being deployed on either side.

* He broke the law
Many Tory MPs believe Johnson’s leadership became untenable the moment he was given a fixed-penalty notice for breaking Covid laws that he created. The idea that lawbreakers cannot be lawmakers is a powerful one. There is also the sense of hypocrisy, given that Johnson stood up at press conferences and urged people to abide by the law to save lives. A cavalier attitude towards the law was also in evidence when he tried to prorogue parliament at the height of the Brexit crisis and more recently threatened to override parts of the internationally binding Northern Ireland protocol.

* Poor leadership
Aside from Johnson’s own transgressions, he presided over a culture of partying in No 10 that was clearly chaotic and out of control. He may not have personally ordered the wine fridge, drunkenly broken his son Wilfred’s swing, or smuggled in suitcases of wine, but his leadership turned a blind eye to this situation at a time when millions of people were suffering in isolation and seeing relatives die alone. Concerns about his leadership also go back to the Owen Paterson affair, when he tried to get the Tory backbencher off the hook over a breach of parliament’s lobbying rules.

* Unpopularity with the public
The most powerful argument among many Tory MPs for getting rid of Johnson is his unpopularity. He may be guilty of all kinds of wrongdoing but leaders are typically safe and backed by their MPs until the tide of public opinion turns decisively against them. This has happened in the case of Johnson, with the Tories consistently trailing Labour in the polls and MPs hearing from their voters that he should go, as trust in his leadership has evaporated. In an ominous sign, the prime minister was booed at the jubilee service for the Queen on Friday, seemingly by a crowd of royal fans.

* Lack of direction and failure to deal with the cost of living
There is general unease among Tory MPs that the government is rudderless and lacking in ideas. Many of its big cost of living interventions – the windfall tax and energy price cap – have been nabbed from Labour.

* Scattergun rightwing policies
In one of the most brutal letters to the prime minister announcing a loss of confidence, the backbencher Jesse Norman mentioned “foolhardy” and possibly illegal plans to disapply the Northern Ireland protocol, the privatisation of Channel 4 and “ugly” plans to send refugees to Rwanda as reasons he could not support Johnson. There are many others who do not back the prime minister’s lurch to the right and fixation on backward-looking issues such as a return to imperial measures.

* The threat of scandals to come
Rebels point to the reports of another yet-uninvestigated birthday party for Johnson during lockdown, and the fear that the Partygate furore is far from over. MPs are still to determine whether he misled parliament over the lockdown-breaking parties. And there is a sense that with the prime minister, the next scandal cannot be far away – whether over his friendship with Lord Lebedev, the furnishing of the No 11 flat or his relationship with the businesswoman Jennifer Arcuri.

* Lack of an alternative
One of No 10’s strongest arguments is that there is no clear successor to Johnson. The main names in the frame are Rishi Sunak, whose popularity has taken a dive over his tax affairs, and Liz Truss, who has never enjoyed much in the first place. Jeremy Hunt, who lost to Johnson last time, could make a comeback but as a centrist former remainer, he is not particularly palatable to the party’s pro-Brexit right wing, who have prospered under Johnson.

* Stability at a time of war in Europe
Johnson’s allies are arguing that he has made the right calls on Ukraine and it would be destabilising for the country to lose a prime minister at such an uncertain time. Despite Johnson presiding over a degree of instability in the UK, they argue it is in the country’s best interests to stick with a known quantity.

* He won in 2019 and could win again
The prime minister’s backers believe he is a proven winner, after he took many Labour-dominated seats in the north of England and Midlands, winning an 80-seat majority. They argue that people’s memories are short and that by the time of another election in two years’ time, the national conversation will have moved on from the parties in No 10.

* A new leadership contest will lead to “blue-on-blue civil war”
No 10 is arguing that the Tories choosing another leader midway through a parliament will be seen by the voters as self-indulgent and politicians talking about themselves rather than getting on with governing.

* The prospect of a centrist, pro-remain replacement
Behind closed doors, the whips are pointing to an argument made by Tobias Ellwood, one of Johnson’s critics, that the UK should rejoin the single market. They are arguing that the replacement of Johnson with a more centrist alternative could lead to backsliding on Brexit. Although Ellwood’s position is not shared by many colleagues in the Tory party, it has caused some pro-Brexit waverers to think twice about removing the prime minister, who went into the 2019 election promising to “get Brexit done”.