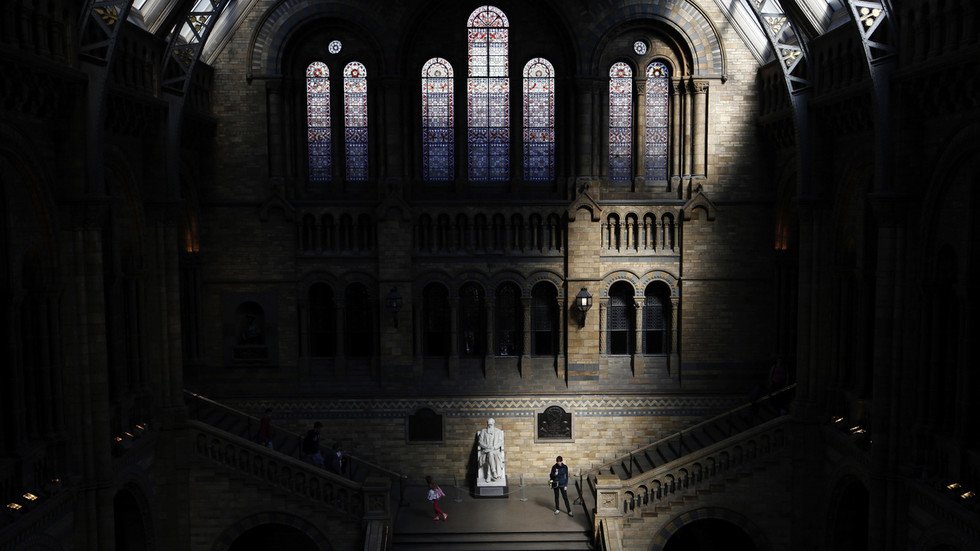 ‘You thought it would stop at statues?’ Darwin exhibits at UK's Natural History Museum may be canceled for being ‘offensive’

The UK's Natural History Museum is reviewing options for its Charles Darwin exhibits, including possible removal, after an internal review ordered amid Black Lives Matter protests found that they could be deemed “offensive.”

The museum's directors are scrutinizing collections that may be considered "problematic," which could lead to removal or lesser remedies, such as renaming, The Telegraph reported, citing internal documents. Artifacts from the father of evolutionary theory are among the suspects because Darwin's voyage to the Galapagos Islands on HMS 'Beagle' was one of the UK's “colonialist scientific expeditions.”

“In light of Black Lives Matter and the recent anti-racist demonstrations around the world,” the museum is re-evaluating room names, collections and statues to root out any that “could potentially cause offense.” A large wing of the museum is named after Darwin, and a statue of the naturalist stands in the museum's main hall.

One of the documents cited by The Telegraph was a paper written by a curator arguing that “museums were put in place to legitimize a racist ideology.” And because “covert racism exists in the gaps between the displays,” collections must be “decolonized.”

The journey by Darwin and Captain Robert Fitzroy to South America served to “enable greater British control” – sinfully offensive in the eyes of some. A statue of Thomas Henry Huxley also could be axed, given the late scientist's racial theories. The contributions of Sir Joseph Banks could be at risk because the botanist traveled on Captain James Cook's 'Endeavor' voyage.

They're 'decolonizing' museums now. You thought it would stop at the statues? https://t.co/Rev4J8TFEy

A sharp-eyed curator also found that the ceiling in Hintze Hall has images of cotton, tea and tobacco, “the plants that fueled the British Empire's economy.” Collections from Swedish scientist Carl Linnaeus, who created the Latin naming system for species, and Sir Hans Sloane also are under review. Linnaeus might offend because his system led to renaming of specimens, replacing indigenous terms. Sloane was a founding father of the museum, but he profited from slavery in Jamaica.

“The Black Lives Matter movement has demonstrated that we need to do more and act faster,” museum director Michael Dixon told staff in one of the documents. “We want to learn and educate ourselves, recognizing that greater understanding and awareness on diversity and inclusion are essential.”

They want to completely rewrite history to suit their egos. They can't accept that history is not fair, its ugly and it exists independent of their emotions. They don't seem to understand that its important to understand where things originated even if they've changed over time.

Twitter users were taken aback by the thought of collections from Darwin and other major historic figures being canceled. “They're decolonizing museums now,” conservative social media pundit Ian Miles Cheong said Sunday. “You thought they would stop at the statues?”

They literally want to ERASE HISTORY... not store it somewhere so we don't repeat it... they want to destroy it... what the actual f*ck

Other observers likened current events to George Orwell's '1984,' saying that ‘leftists’ are trying to “completely rewrite history to suit their egos.” A New Hampshire writer said: “They literally want to erase history, not store it somewhere so we don't repeat it.”

"Just move the statues we say are offensive to a museum"

"Remove everything we say is offensive from the museum"

The hate & bigotry of 'tolerant progressives' can never be sated