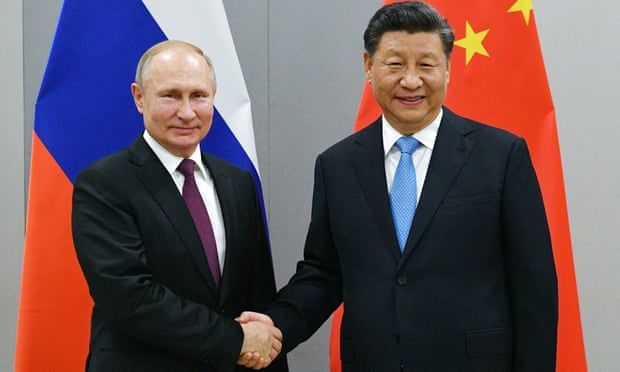 Chinese and Russian leaders call on west to abandon ‘cold war’ approach at pre-Olympic meeting
China’s Xi Jinping and Vladimir Putin of Russia have signed a joint statement calling on the west to “abandon the ideologised approaches of the cold war”, as the two leaders showcased their warming relationship in Beijing at the start of the Winter Olympics.

The politicans also said the bonds between the two countries had “no limits”. “[T]here are no ‘forbidden’ areas of cooperation’,” they declared.

In the joint statement released by the Kremlin, Putin and Xi called on Nato to rule out expansion in eastern Europe, denounced the formation of security blocs in the Asia Pacific region, and criticised the Aukus trilateral security pact between the US, UK and Australia.

The two leaders met for the 38th time since 2013. The two countries also pledged to step up cooperation to thwart “colour revolutions” and external interference, and vowed to further deepen “back-to-back” strategic coordination.

The statement declared that the new Sino-Russia relations were “superior to political and military alliances of the cold war era”. It shows the ambitions and anxieties China and Russia both share, and how they have increasingly found common interest in their respective disagreements with western powers, analysts say.

“The parties oppose the further expansion of Nato, call on the North Atlantic alliance to abandon the ideologised approaches of the cold war, respect the sovereignty, security and interests of other countries, the diversity of their civilisational and cultural-historical patterns, and treat the peaceful development of other states objectively and fairly,” the document said.

In a nod to Russian interests in Ukraine, China said it “understands and supports the proposals put forward by the Russian Federation on the formation of long-term legally binding security guarantees in Europe”, the document said.

At the same time, it addressed Chinese concerns about US-led trade and security alliances in its own region – something Beijing has intensified its criticism of in recent years.

“The parties oppose the formation of closed bloc structures and opposing camps in the Asia Pacific region, and remain highly vigilant about the negative impact of the US Indo-Pacific strategy on peace and stability in this region,” it read.

While there are still stumbling blocks in the relationship and a fully-fledged alliance between Moscow and Beijing is unlikely, the two sides are signalling that they want to roll back US influence in their respective regions.

“We are working together to bring to life true multilateralism,” Xi told Putin, according to the Kremlin translation of their remarks. “Defending the real spirit of democracy serves as a reliable foundation for uniting the world in overcoming crises and defending equality.”

The statement also devoted an entire section on the two sides’ shared understanding of “democracy” and claimed both countries “have long-standing traditions of democracy”. But they said that the advocacy of democracy and human rights “must not be used to put pressure on other countries”.

Friday’s meeting was Xi’s first face-to-face engagement with a foreign leader in nearly two years. The Chinese leader has not left the country since January 2020, when it was grappling with its initial Covid-19 outbreak and locked down the central city of Wuhan where the virus was first reported.

He is preparing to meet more than 20 leaders as Beijing kicks off a Winter Olympics it hopes will be a soft-power triumph and shift focus away from a buildup blighted by a diplomatic boycott and Covid fears.

It was also a rare trip abroad for Putin, who has left Russia just twice since the outbreak of Covid-19 and has maintained a healthy distance from visiting leaders such as Hungary’s Viktor Orbán.

But as he strode toward Xi on Friday, Putin gave a wide smile and shook the Chinese leader’s hand before posing for photographers. The two are expected to attend the Olympic opening ceremony on Friday evening.

Following their talks, Russia and China also signed a series of trade and energy deals, including a new contract for Russia to supply an additional 10bn cubic metres of gas each year to China, Putin announced. Gazprom announced the 30-year contract to deliver the gas from Russia’s far east to the Chinese state energy corporation CNPC, Reuters reported.

Russia already supplies China with about 38bn cubic metres of gas each year via its Power of Siberia pipeline, and is eyeing a second pipeline that would open an additional market for Yamal peninsula gasfields as its Nord Stream 2 pipeline to Germany has been threatened with sanctions in case of a Russian attack on Ukraine.

The leaders of both France and Germany have said they plan to travel to Moscow in the coming weeks to continue talks with Putin and head off a potential invasion of Ukraine. The French president, Emmanuel Macron, is expected to visit Moscow on Monday and then travel on to Kyiv on Tuesday, as he practices shuttle diplomacy between Putin and the Ukrainian president, Volodymyr Zelenskiy. Germany’s Olaf Scholz will travel to Kyiv on the 14 February and Moscow the next day.

China’s state-run Xinhua news agency also carried an article from Putin on Thursday in which the Russian leader painted a portrait of two neighbours with increasingly shared global goals.

“Foreign policy coordination between Russia and China is based on close and coinciding approaches to solving global and regional issues,” Putin wrote.

He also hit out at US-led diplomatic boycotts of the Beijing Olympics that were sparked by China’s human rights record.

“Sadly, attempts by a number of countries to politicise sports for their selfish interests have recently intensified,” Putin wrote, calling such moves “fundamentally wrong”.

For its part, China has become more vocal in backing Russia in its dispute with Nato powers over Ukraine.

Moscow is looking for support after its deployment of 100,000 troops near its border with Ukraine prompted western nations to warn of an invasion and threaten “severe consequences” in response to any Russian attack.

China enjoyed plentiful support from the Soviet Union – the precursor to the modern Russian state – after the establishment of Communist rule in 1949, but the two socialist powers later fell out over ideological differences.

Relations got back on track as the cold war ended in the 1990s, and the pair have pursued a strategic partnership in recent years that has seen them work closely on trade, military and geopolitical issues.

Those bonds have strengthened further during the Xi Jinping era, at a time when Russia and China find themselves increasingly at odds with western powers. In 2014, in a show of defiance against fierce western criticism over the annexation of Crimea, Putin turned to Xi to look for an alternative. Beijing showed its support by signing a $400bn, 30-year gas deal.

About 21 world leaders are expected to attend the Games. A majority of those leaders rule non-democratic regimes, according to the Economist Intelligence Unit’s Democracy Index, with 12 labelled either “authoritarian” or a “hybrid regime”.
#COVID-19  #Covid
Add Comment