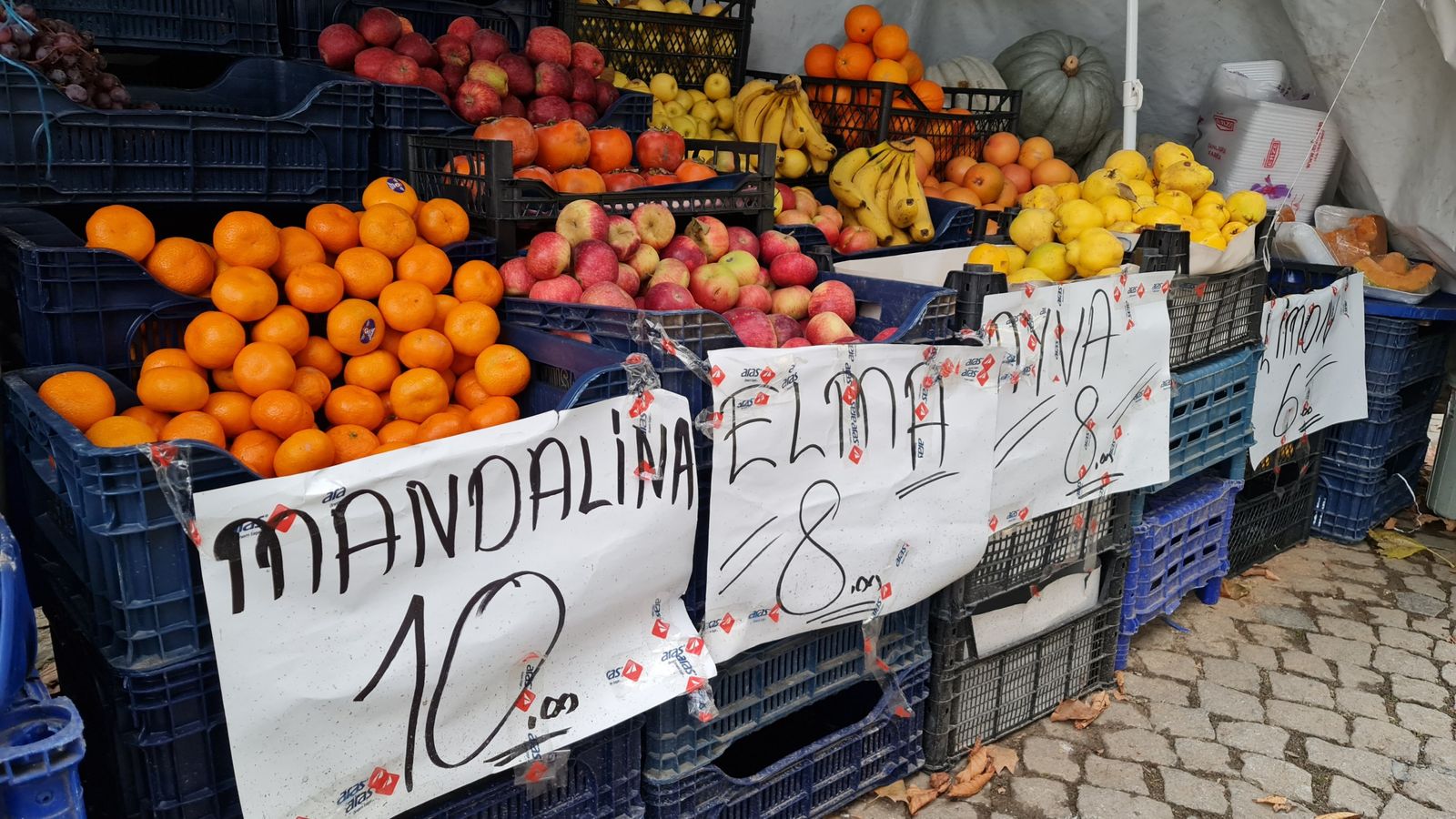 Wine up 15% in a day, chicken by 10%. The price Turks are paying for country's currency collapse

Inflation is rampaging across Turkey's economy as the country's president continues a policy of interest rate cuts but Sky's producer in Istanbul still finds support for the unusual move on the ground.

Istanbul's sky is as gloomy as the mood in the households and on the streets of Turkey.

It may look like business as usual but for many the recent developments have taken a toll.

Prices had already hiked during the pandemic. Packaged goods shrunk and prices increased but there was not a single empty shelf. Compared to the western world, Turks prided themselves with not having to fight for toilet paper or masks.

But today the recent change in interest rates policy and the unorthodox economic strategy is impacting the exchange rate sinking the national currency to an all time low. Turks may not earn their wages in foreign currency but their currency is melting like ice on a summer day and prices increase by the week. 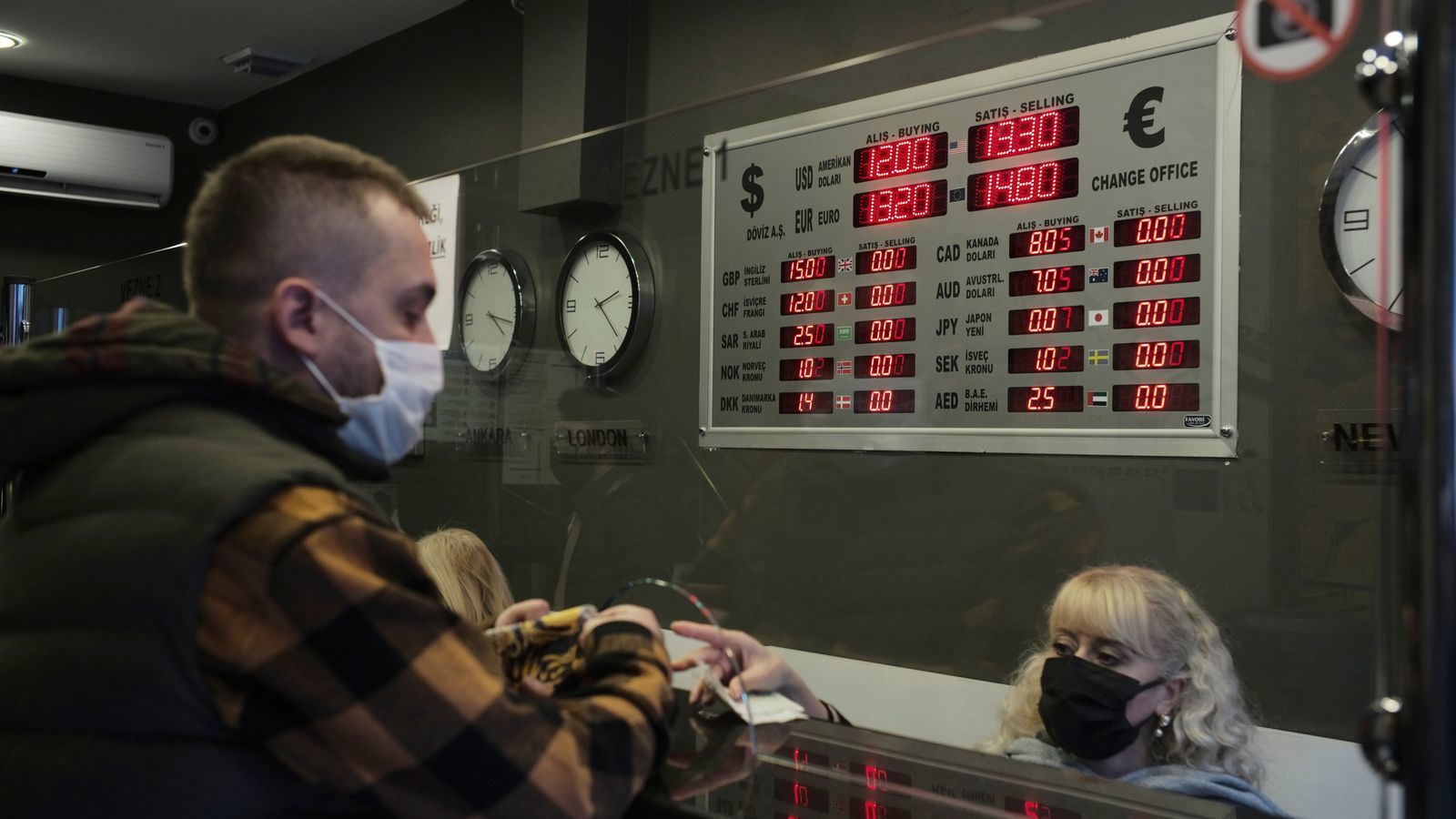 A man changes Turkish lira for US dollars and euros at a currency exchange shop, in Ankara.

A bottle of wine I bought the day before had increased by 15%. It is hard to keep up.

The Twitter universe is joking about a new trending profession, "price taggers". They are needed to get prices up to date in all shops and supermarkets.

Ibrahim Koksal is a tiny shop owner in Yeniköy. He has a tiny "bodega" store that sells as many items as possible from cigarettes to batteries as well as fast food he cooks on the go. Running from his food stall to his cashiers' desk all with a smile.

He has been a small shop owner since 1993 and admits the price increases have hit him, his household and his business as well as his customers.

"I cannot reflect the 10% increase from this morning on the chicken and cheese I use in my sandwiches.

"Because the business is so slow, it would scare off my last customers," he tells me very honestly. "I have to create some turnover but I am losing from my profit". 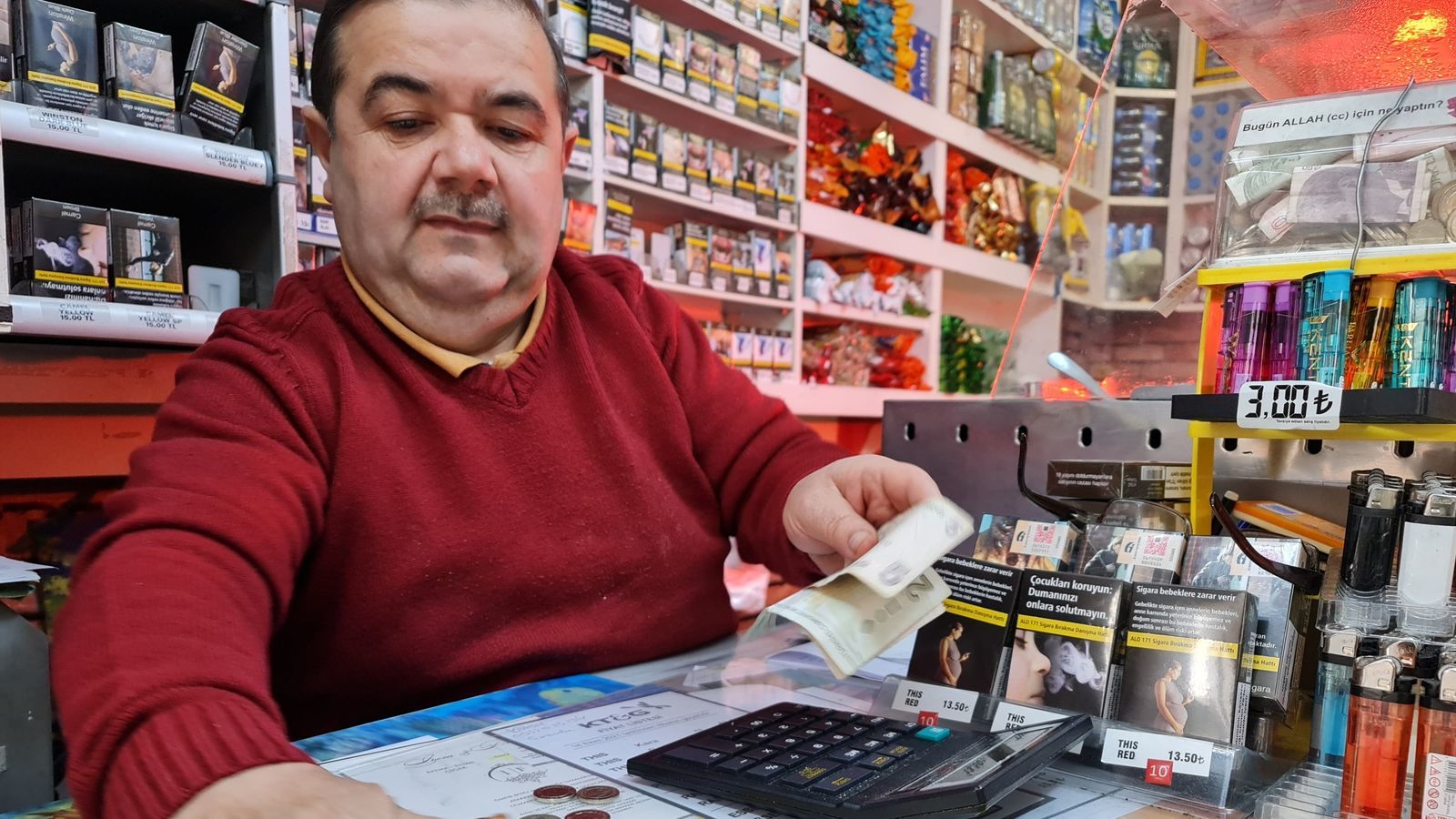 Ibrahim supports the president's policy despite struggling to make a profit

When asked about what he thinks the reason for the current economic situation is, Ibrahim says: "Our neighbours are jealous. This is what I think". He repeats President's Erdoğan's rhetoric of waging an independence war. It will demand time and sacrifice, a sacrifice he is prepared to make.

He does not believe in an early election or the ability of the opposition parties to handle the task.

Ibrahim says Erdoğan is working for the country against everyone - and he stands by him.

I meet 41-year old Özgür who owns a jewellery shop on the main Street in Yeniköy.

I am the second person who enters the shop in an hour. For Özgür, he is witnessing the slowest business since during the pandemic.

"I have made half of what I usually earn this last month. The price fluctuation between yesterday and today is over 10%.

"This is untenable. In my professional life I have never seen anything like the last 10 days we went through. Our customers do not know what to do. They are waiting to see what will happen." 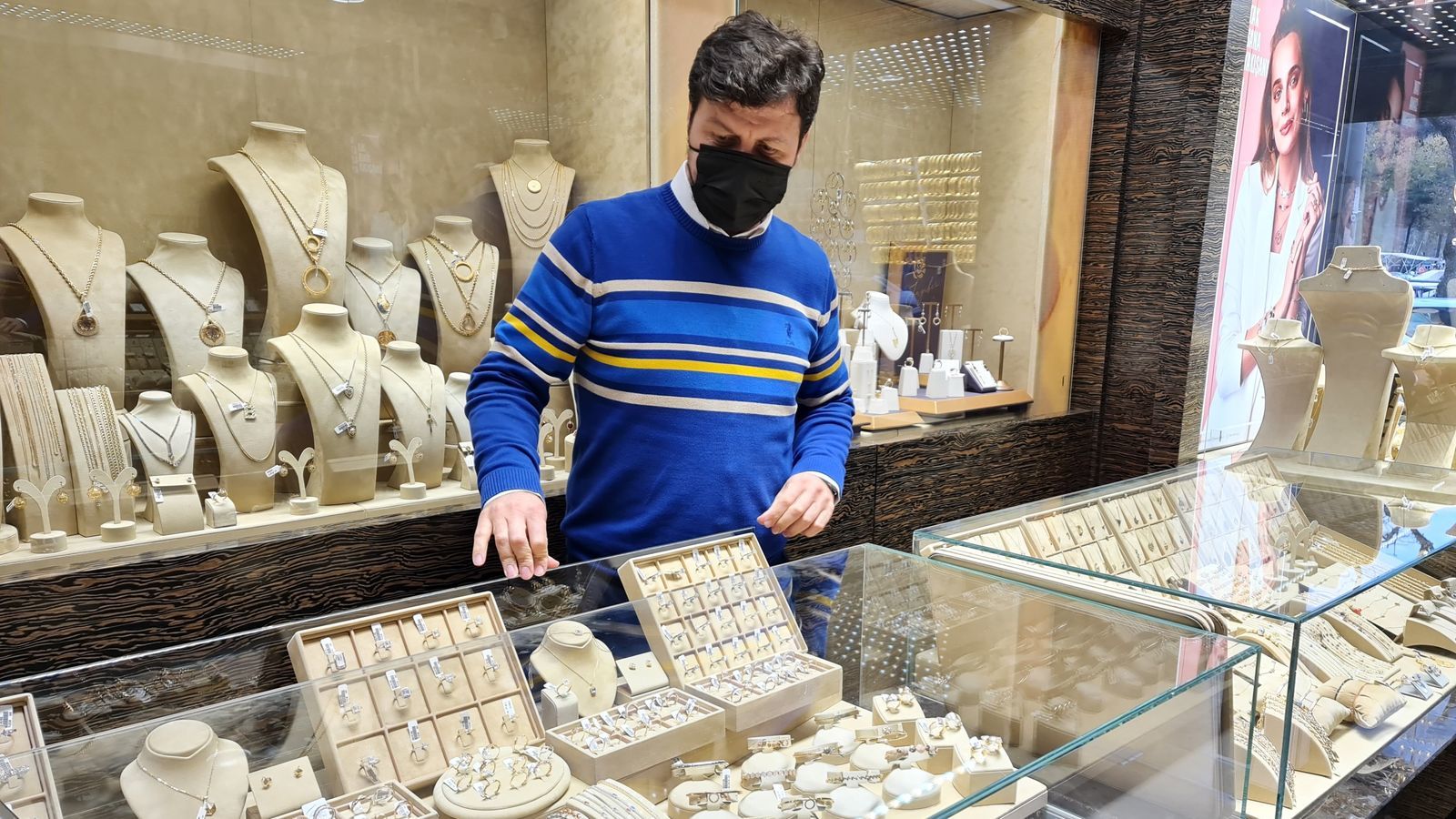 For Özgür, there is a definite need for stability, and a need to stop the obstinate stand with the interest rates.

I ask if he thinks an election would be the solution: "I think we may see an election this summer. I think if the opposition gets elected there might be some easing of the tensions. But we need to come back to stability."

It is a sentiment shared by everyone in supermarkets, shops, pharmacies - the conversations are one of worry of the unknown.

Many feel free to voice their worry like Özgür or Ibrahim, but the everyday housewife does not want to answer any questions, "Don't you see what is happening?" they all say.

In a matter of weeks, their shopping cart has suffered from the price hikes.

They feel they are paying twice the price and get half of what they used to buy. They do not want to comment, they want to go back to how it was.

According to President Erdoğan, a positive impact will be felt in a few months but there is a very tough winter ahead.