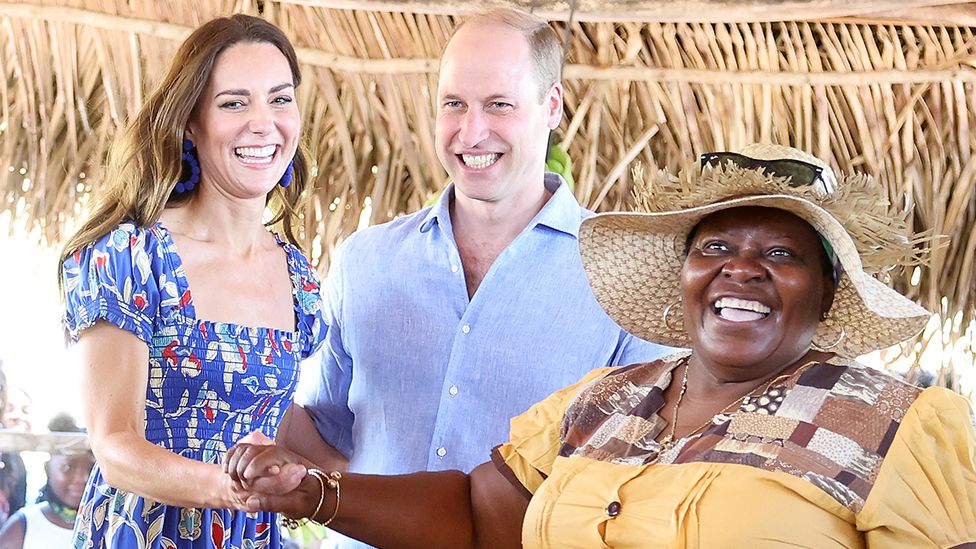 The Duke and Duchess of Cambridge have been dancing with locals and sampling chocolate at a cocoa farm as they explored Belize.

"They were shaking their waists like nobody's business," said Laura Cacho, a local festival organiser who danced with William.

On the second day of their Caribbean tour, the royals visited the Che 'il chocolate farm

They ground cacao nibs, before the future king jokingly asked for a job.

The duke and duchess were rewarded with a taste of the products at the family-run cocoa farm in the village of Maya Center in southern Belize, with Catherine admitting their children would be "jealous".

The duke and duchess later showed off their moves on the dancefloor as they experienced the culture of the Garifuna community in the coastal village of Hopkins.

Ms Cacho, 57, said it was a "pleasure" to dance with William.

"He shook his waist to the music. He had beautiful rhythm. It was a pleasure for me.

"Kate was excellent as well and definitely has Garifuna culture in her." 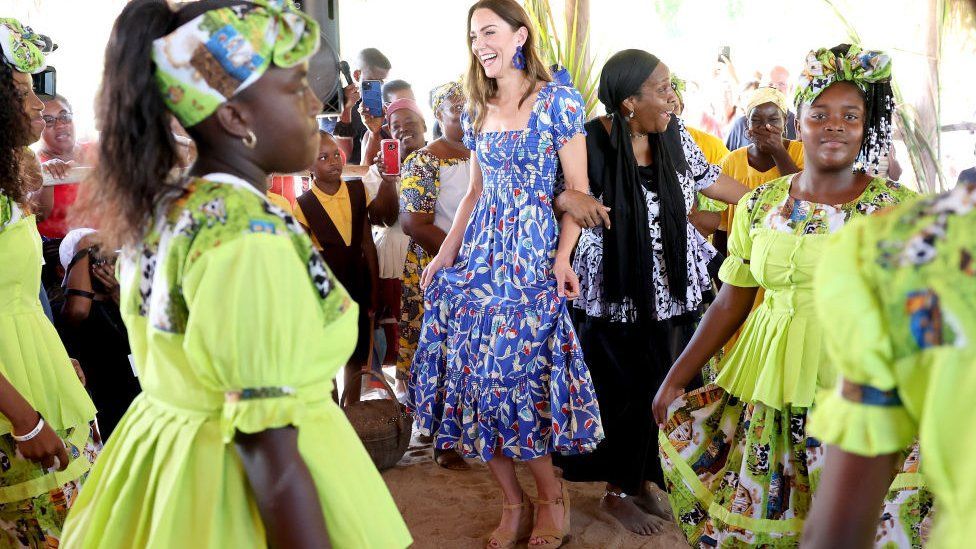 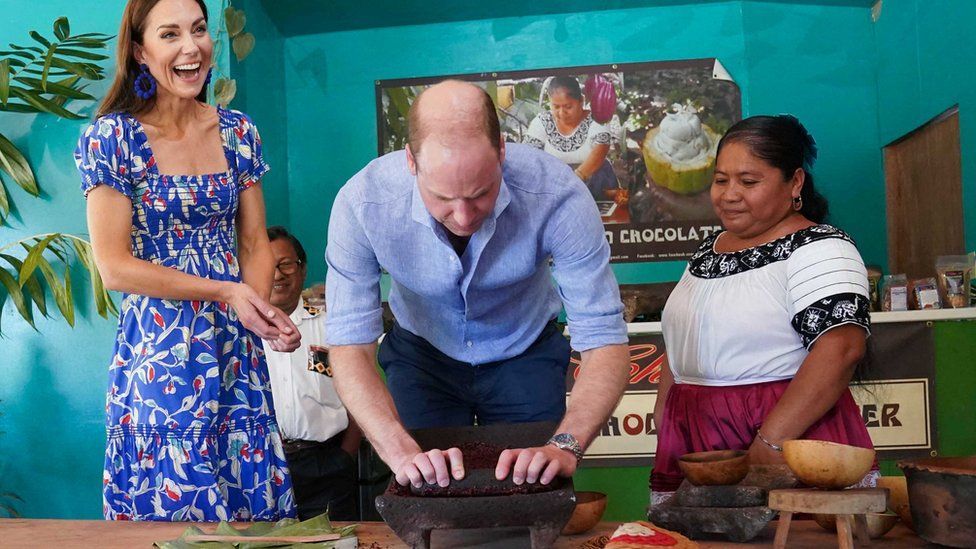 Earlier, during the trip to the cocoa farm, the royal couple learnt first-hand about the work that goes into producing the chocolate.

William, 39, who had been pounding away with a mortar and pestle made from volcanic rock, quipped about swapping his royal day job for one on the farm, asking the owner, Julio Saqui: "Do you take apprentices?

The duke and duchess were shown cocoa trees laden with fruit, with Catherine, 40, asking the owner's brother, Narcisio, how often they are harvested.

As they took a break from the blistering sun under a marquee, the royal couple heard from Narcisio about the importance of the cocoa bean. 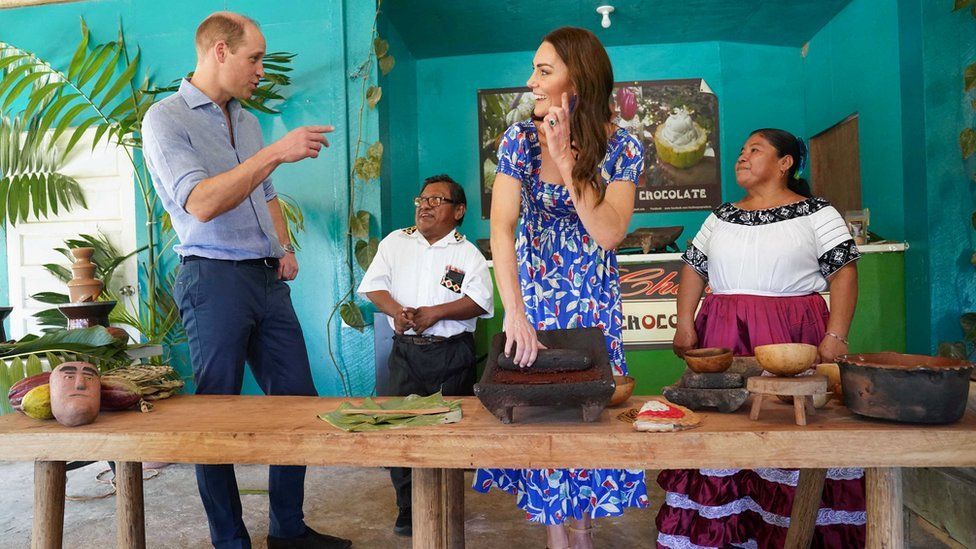 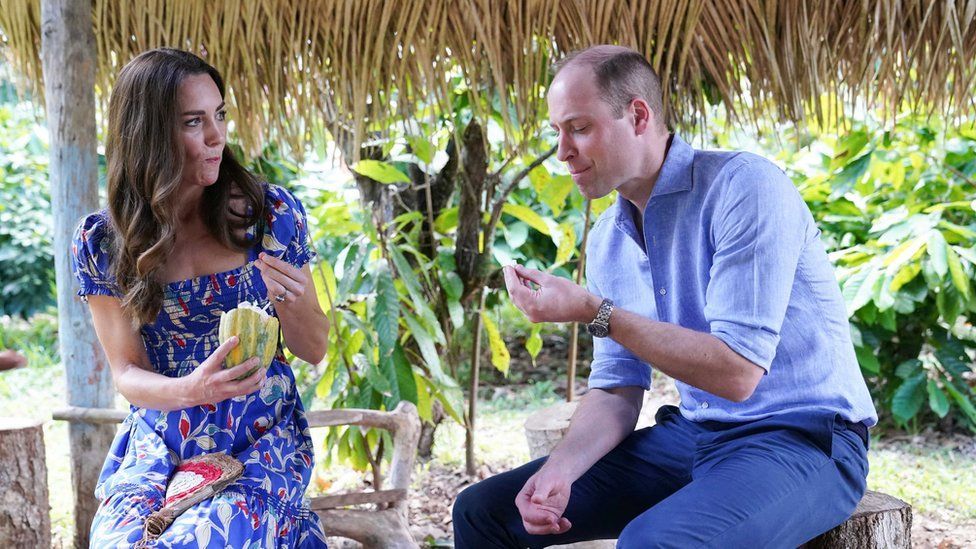 The Saqui family are part of Belize's Maya community, where the cocoa bean is sacred and has been a key part of their culture for thousands of years.

The cocoa bean was once considered more valuable than gold to the Maya people, who served it to royalty and continue to offer it to important guests.

The duke expressed his surprise after using a club to break open a cocoa pod - which was filled with white sticky seeds that have to be fermented, dried, roasted and ground to make chocolate - exclaiming: "That's not what I expected at all."

The couple later got to taste some of the farm's goods as they dipped tortilla chips into chocolate fountains, and tried hot chocolate made from organic products.

William and Catherine later met conservationists on the Hopkins' beach to learn about the area's marine environment and efforts to preserve Belize's barrier reef.

William and Catherine's tour of the Che 'il chocolate farm came after a planned trip to a similar producer had to be axed after reported opposition from local residents.

The Cambridges' visit to the Akte 'il Ha cacao farm in Indian Creek village was cancelled amid a reported dispute between villagers and Fauna and Flora International (FFI), which has William as patron, over land owned by the conservation organisation.

Residents are also reported to have raised concerns saying they were not consulted about plans for the couple's helicopter to land on a local football pitch.

Kensington Palace and the Belize government confirmed the schedule change, while a spokesman for FFI said the charity would "support the livelihoods, educational opportunities and the customary rights of local people" as part of its project in the area.

On landing at Belize City's Philip S. W. Goldson International Airport on Sunday, the duke and duchess were greeted by Belize's governor general and a guard of honour from the Belize Defence Force.

They royal couple later met Prime Minister Johnny Briceno and his wife Rossana, with Mr Briceno telling them: "We're so happy you're here." 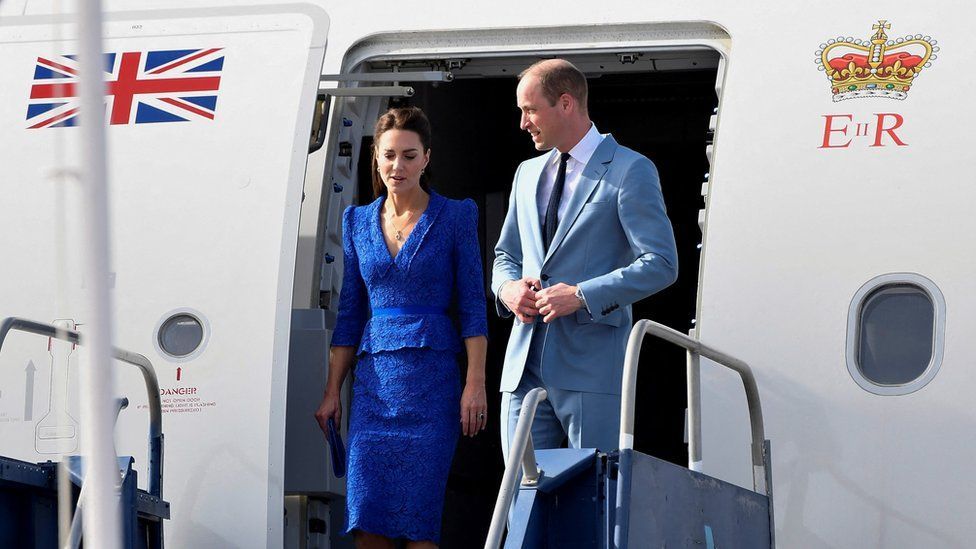 The Cambridges landed at Belize City's airport on Sunday

The royal couple will also visit Jamaica and the Bahamas as part of their eight-day tour, with highlights set to include a sailing regatta in the Bahamas in honour of the Queen's 70-year reign, and a celebration of Jamaica's musical and sporting heritage.

Watch: The Duke and Duchess of Cambridge show off their dance moves in Belize
Add Comment