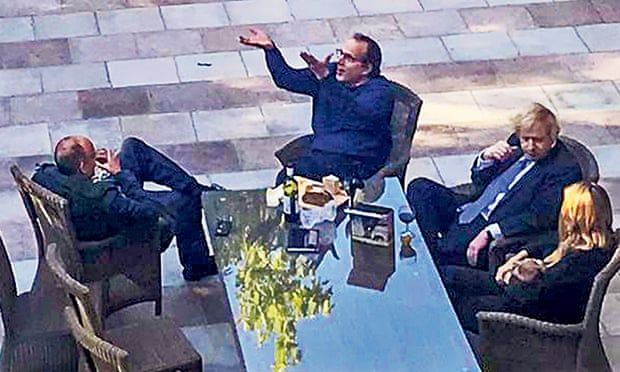 Why pictures of Downing Street parties could be smoking gun

Analysis: Many believe it is only images that will ultimately prove whether Boris Johnson misled MPs over lockdown gatherings
Even before the final Sue Gray inquiry is published, the public may feel it already knows the inside story of the Downing Street parties in granular details – from suitcases of wine, to broken swings and DJ sets in the basement.

But given the sheer number of photographs that the Met police have been handed to examine – more than 300 – it is perhaps surprising that more have not found their way into the media.

The Guardian published a photograph taken of the Downing Street garden in May 2020, with Boris and Carrie Johnson sitting in the sunshine with glasses of wine along with aides including Dominic Cummings and Martin Reynolds. Other screengrabs of the No 10 Christmas quiz have been published.

But none has emerged from the most egregious breaches that have been reported, including the summer party where staffers were asked to “bring your own booze” or the leaving parties for staff, including one on the eve of Prince Philip’s funeral.

Some ex-officials who have attended the parties are convinced that the lack of pictures is the key reason why Johnson has been able to successfully spin a version that allows him to convince MPs that he believed that those he attended were work events.

Many of the pictures are understood to have been snapped by Andrew Parsons, Johnson’s official photographer on the No 10 payroll. Some allies of Johnson have used this as a way to explain why the PM remained so convinced he was doing nothing wrong – he was content to allow himself to be photographed.

Those pictures have never been published but are believed to form part of Gray’s inquiry and the evidence she handed to the Met police.

One Tory source said the photographs of Johnson’s birthday gathering in the cabinet room – the only event for which he has been fined – would raise serious doubts about Johnson’s version of events there and would demonstrate it had been a significant celebratory gathering in breach of the rules.

But there are also believed to be a significant number of other photographs taken by aides on their mobile phones at more than a dozen gatherings. The Met police have said they will not release the photographs and it is doubtful whether the final report from Gray’s inquiry will include them.

The existence of the images is one of the key reasons why Johnson will be so keen to block a parliamentary inquiry into his conduct. Separate from the Whitehall and police inquiries, this would look specifically at whether the prime minister purposely misled parliament.

Such an inquiry is highly unlikely because Tory MPs will block it. But in theory the committee could call for papers – including the photographs – and summon witnesses.

It is only the images that could ultimately prove whether Johnson has misled the House of Commons with his version of the events he attended – and his assertions that the guidance was followed at all times.
#Boris Johnson  #Johnson
Add Comment