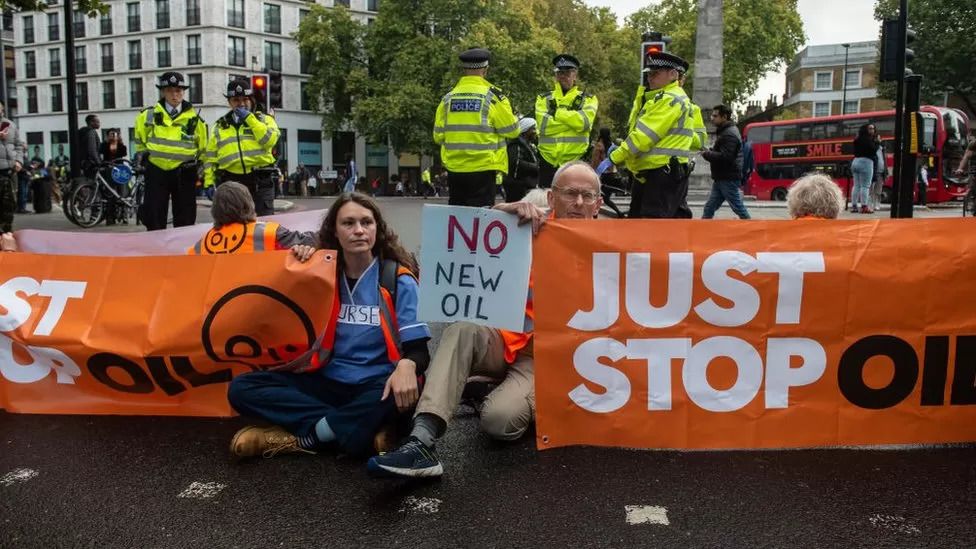 Protesters could be blocked from targeting key infrastructure under the home secretary's new plans.

The home secretary has unveiled plans for a major crackdown on disruptive protests carried out by environmental groups such as Extinction Rebellion.

Ministers will be empowered to block protests causing "serious disruption" to key infrastructure and goods.

Activists said they would not be intimidated by law changes aimed at "silencing non-violent people".

More than 350 Just Stop Oil protesters - demanding halts to all new oil and gas licences and consents - have been arrested in London since the start of October, according to Home Office figures.

The home secretary described one incident which saw emergency fire crews unable to get through a junction in Knightsbridge as "indefensible".

Ms Braverman has long expressed opposition to such protests, telling the Conservative Party conference earlier this month there was "not a human right to vandalise property".

She will use the Public Order Bill to allow secretaries of state to apply for injunctions in the "public interest" where protests are causing or threatening "serious disruption or a serious adverse impact on public safety".

The new legislation - which will be put to MPs next week - will also see jail sentences of up to six months or unlimited fines for protesters accused of "locking-on" to people, objects or buildings - a favoured tactic of climate demonstrators.

Home Office officials said the proposed legislation would create a new criminal offence of interfering with infrastructure, such as oil refineries, airports and railways, carrying sentences of up to 12 months in prison.

Meanwhile, tunnelling under infrastructure to cause damage will also now carry a maximum penalty of up to three years in prison, and police will be given new powers to take a more "proactive" approach to some protests.

"Preventing our emergency services from reaching those who desperately need them is indefensible, hideously selfish and in no way in the public interest," Ms Braverman said on Saturday.

"The police need strengthened and tougher powers to match the rise in self-defeating protest tactics and that's what the Public Order Bill will do."

Responding, Just Stop Oil said: "We will not be intimidated by changes to the law, we will not be stopped by injunctions sought to silence non-violent people. Our supporters understand that these are irrelevant when set against mass starvation, slaughter, the loss of our rights, freedoms and communities.

"Stand with our supporters in prison, with the 1,700 murdered across the global, for protecting our futures. We will not die silently, it will be ordinary people, like you, your friends, colleagues and neighbours who do what our government cannot."

Earlier this year the government suffered a major defeat in the House of Lords, after peers rejected similar plans to clamp down on noisy and disruptive protests.

Labour peer Lord Hain - a former Northern Ireland secretary - called the move "the biggest threat to the right to dissent and the right to protest in my lifetime", adding that it would have "throttled" protests by the suffragettes.