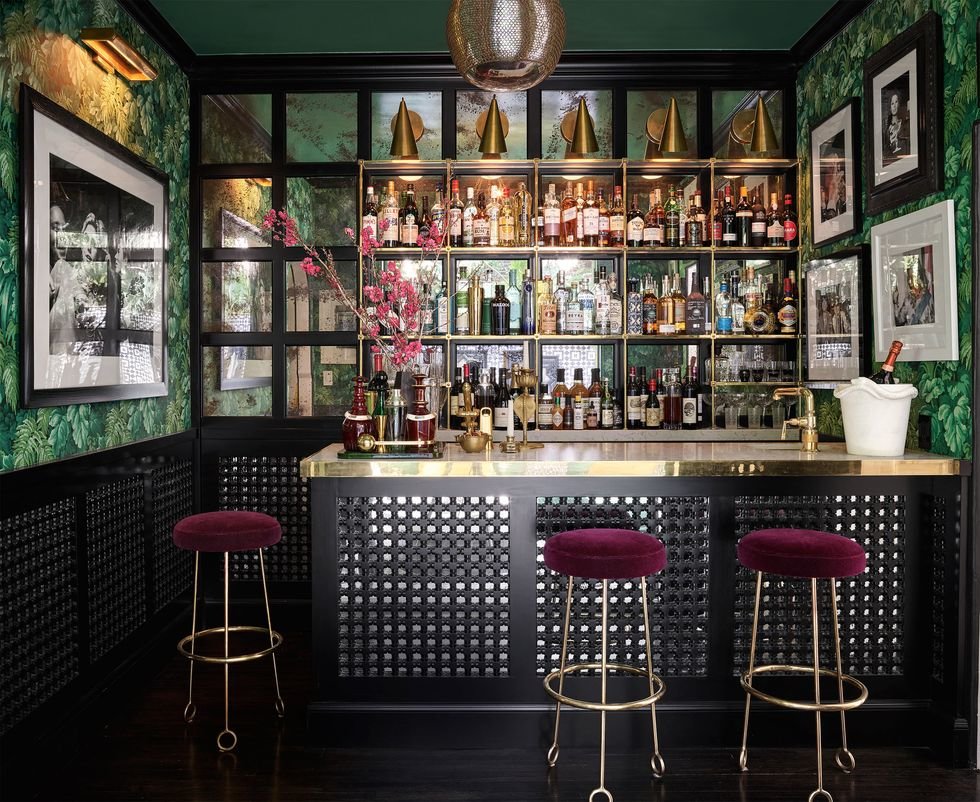 When You Can’t Leave the House, a Home Bar Can Be Your New Place for Cocktail Hour

If you’ve turned to drink to muddle through what remains of 2020, you’re among friends. “We’re seeing clients make space for a home bar even if one didn’t exist before,” says Dallas designer Jean Liu, whose friend stuck one in a coat closet as COVID-19 descended. The standing order: a bar with all the glitz of Bemelmans at the Carlyle hotel in New York City, without the socially condensed throngs.

As with a Cabernet Sauvignon, boldness wins. “It’s the perfect place to paint something bright or dark or moody that they wouldn’t have had the nerve to do otherwise,” says Liu, who has had clients request cast-pewter bar tops in recent months. New Jersey designer Beth Diana Smith concurs: “It’s important now when we’re entertaining at home that you’re giving someone the feeling that they’re not at home,” she says. 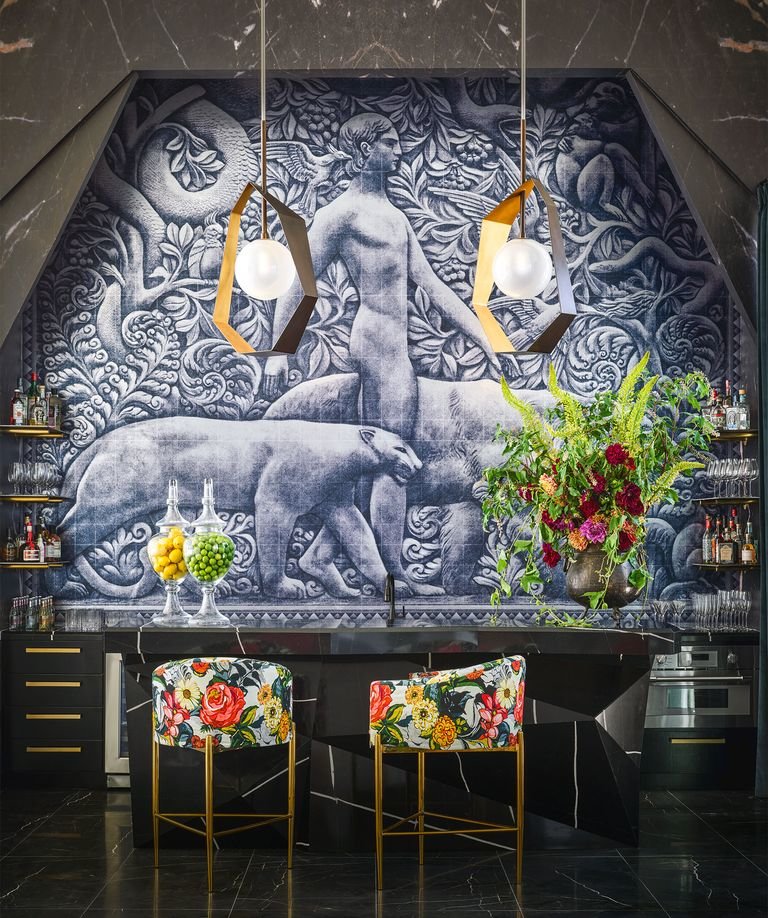 According to ELLE Decor A-List designer J. Randall Powers, who is based in Houston, clients love their houses, yet they always had a life and did social things. “Now we don’t really get to do that, so everybody seems to be focused on interesting little parts of their house that maybe got overlooked, like a bar,” he says. Powers recently fashioned a bar for a bourbon-obsessed client atop a 19th-century Portuguese table, the bottles corralled on a shagreen tray. “It used to be, ‘Come look at my rare antique book collection.’ Now, it’s a little bit like, ‘Hey, check out my Pappy Van Winkle.’ ”

Don’t think these bars have to be tucked just off the living room, either. Dallas designer Michelle Nussbaumer has stationed them everywhere from a home spa to a dressing room tailor-made for Champagne cocktails and playing dress-up. For her space at this year’s inaugural Kips Bay Decorator Show House Dallas, she settled a bar in an upstairs bedroom secreted behind a Moorish arch, then ornamented it further with a mix of 19th-century French glasses, American pressed glass, and her decades-in-the-making horde of swizzle sticks. “There’s something intimate about inviting people to a smaller area for a drink,” she says. “It’s almost like a vacation.” 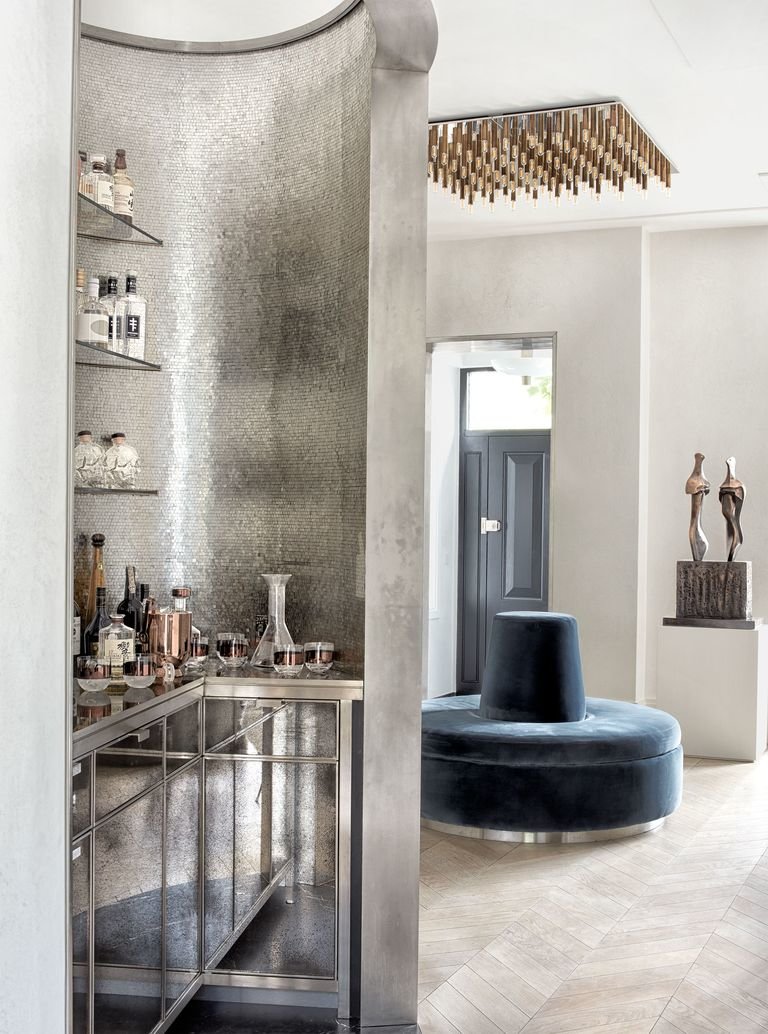 In comparatively cramped quarters, even a classic bar cart can suffice. “I was definitely one of the people who jumped onto the bar-cart bandwagon during COVID when we were sheltering in place,” Smith says. “The fact that liquor stores were considered essential businesses was very telling.” She offset her brass cart by flanking it with textured pieces, including an ovoid basket to hold bottles. “This is the time where you should be splurging on yourself. Fancy and not casual is the way to go.”

Some clients are veering toward the British tradition of a dry bar (sans sink for spaces that can’t be plumbed), Powers says: “In an interesting way, people are going back to the art of making a cocktail as opposed to just having a cocktail.” 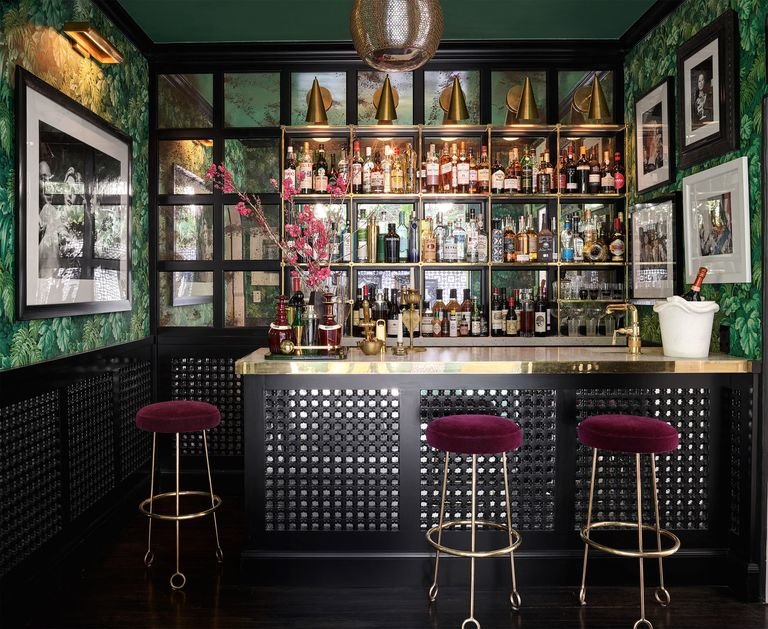 While a simple jigger and shaker can get the job done, there are high-tech upgrades; Nussbaumer has installed dishwashers specifically designed for crystal barware and refrigerator drawers aplenty. “We’re even buying little machines from Williams Sonoma that smoke your drink,” she says.

For a bar concealed behind jib doors in a Dallas family room, Liu placed floating shelves painted a shamrock green before an antiqued-mirror backsplash, which visually doubles the homeowner’s crystal barware. But for Powers, such exposed glasses can be dust traps. “I don’t need to see your passed-down crystal collection. I’d rather drink out of a good everyday glass. If I get smashed and drop it, I don’t feel the need to go buy you another one,” he says. “If you’re going to display it, it really should be behind glass doors. Otherwise, I’m like, ‘When’s the last time that was dusted?’ ”

Liu, however, has a very 2020 rebuttal to that argument: “I don’t know anyone who is letting dust accumulate on their glasses right now.”