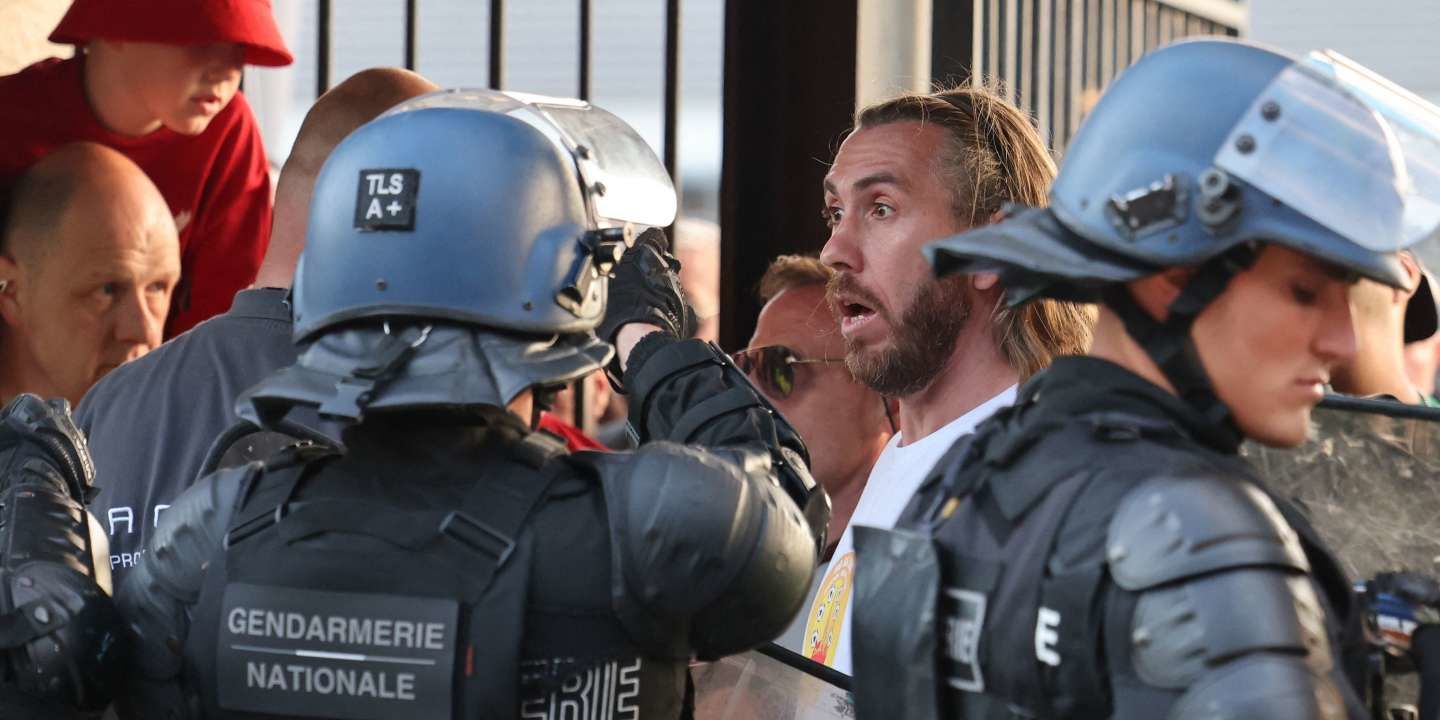 What happened at the Champions League final?

French authorities have blamed late arrivals and fraudulent tickets for chaotic scenes outside the Stade de France before Saturday's Champions League final between Liverpool and Real Madrid. But Liverpool fans who spoke to the BBC described organisational failures, overcrowding and heavy-handed policing.

Here is what we know so far about how events unfolded.

Fans travel to the stadium

Michael Carter was among tens of thousands of Liverpool supporters gathered in a fan zone in the south-west of Paris ahead of the Champions League final.

He recalled a "top class" atmosphere, without any trouble. As early evening approached, he and others with tickets travelled to the Stade de France in the north of the city, ahead of the scheduled kick-off at 21:00.

Fans had been warned to get there early and Merseyside police, who had officers deployed as observers, would later describe the behaviour of most as "exemplary", saying they arrived in plenty of time and queued as directed.

One of the train lines serving the stadium, the RER B, was not working, meaning many fans had to take the RER D. This meant they ended up at a single checkpoint at the perimeter outside the stadium.

Mr Carter said the trouble started to begin when fans leaving the station were "squeezed" into a "narrow alley". 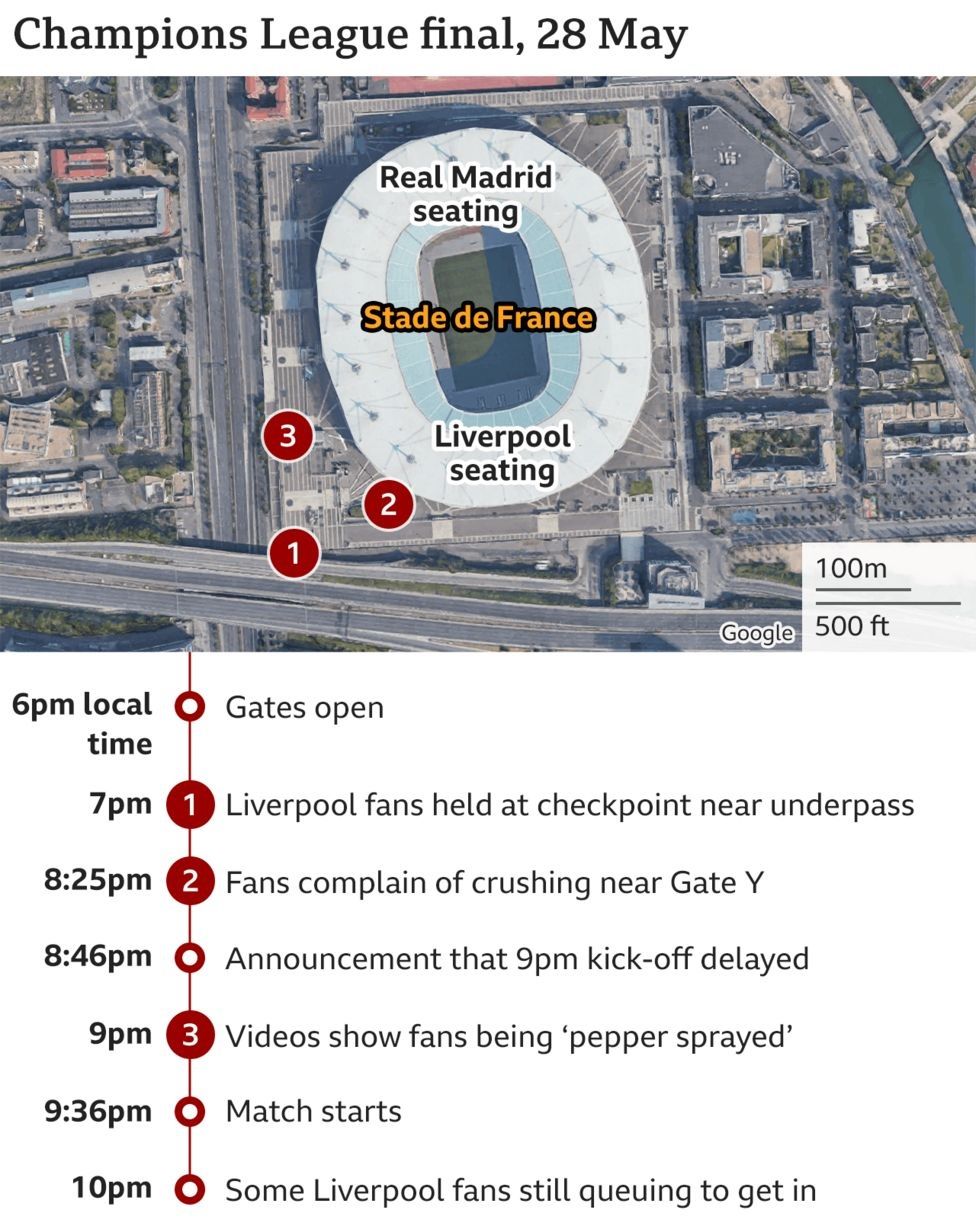 Some fans said they were searched multiple times, further adding to the delays, while police vans blocked part of the route to funnel supporters towards a ticket stop. Liverpool fan Matt Lomas said he saw people without tickets turned away at this point, but it took two hours to move 40 yards (36m).

Michael Carter told the BBC that people further back in the queue "were lifting each other up and over the walls because they were being crushed". By the time he got to the police barricade, there were "no ticket checks, they were just letting people through" - including local youths who had been trying to snatch fans' bags and other possessions, he said. 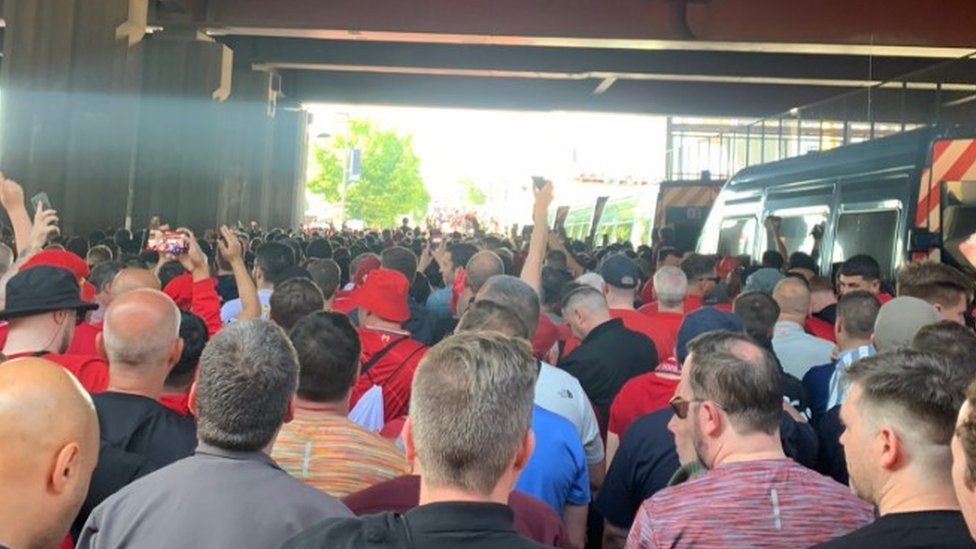 Thousands of fans were crammed into underpasses, taking hours to reach the stadium

Mr Carter said at one point, people at this checkpoint were doused indiscriminately in what was thought to be pepper spray, causing the crowd to stampede backwards and leaving some of them vomiting as others rushed for water from neighbouring bars to ease the pain.

Attempts to breach the barriers

When they finally reached the gates, fans described more chaotic scenes. Mr Carter said people were being manhandled through the turnstile without their tickets being scanned as the crowd pressed in on them, while videos showed others trying to jump the barriers.

Gates X and Y, two of the main entrances for Liverpool fans, were closed altogether at one point, said BBC News reporter Nick Parrott, who was at the stadium as a fan. He said about 1,500 to 2,000 people were waiting outside each gate.

Some people tried to get through gates A and B, but locals without tickets tried to force their way in at the same time, he said. He saw police punch one fan, who did not react, while using the spray on others.

"The safest place was to be in the ground, that's why the fans were trying to get in so much," Mr Parrott said. "The police just seemed to go after anyone who moved."

Police say they were overwhelmed

While eyewitnesses felt police tactics were heavy-handed, a spokesperson for a police union said officers on the ground were overwhelmed.

But Mathieu Valet, from senior police officers' union the SICP, told the BBC's Newshour the main issue was not ticketless fans or fake tickets, but "three or four hundred French and undocumented delinquents who were there on the concourse of the Stade de France".

"It's clear that we needed more police - we didn't have enough on the ground," Mr Valet said. 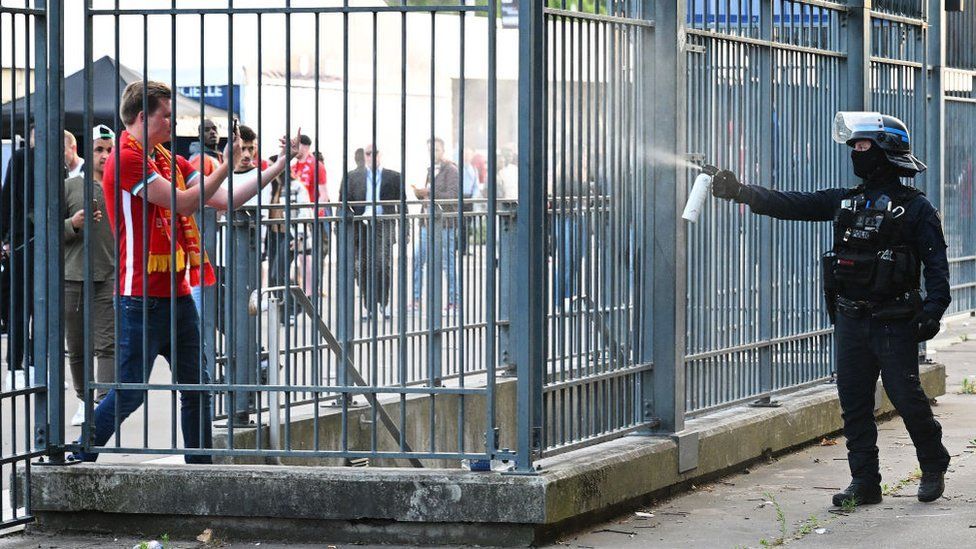 He confirmed the use of tear gas, saying it "unfortunately does not discriminate".

"It's clear that families, children, mainly English supporters, were inconvenienced by tear gas, I know it's not part of your culture but it allows us to repel attackers," he said.

Muggers and pickpockets in the crowd

Liverpool fans also said many of the crowd troubles were caused by locals, describing gangs of young people who tried to steal from the travelling football fans and rush the gates.

Steve Rotherham, mayor of Liverpool City Region, was one of their victims. "Like too many others, I had my phone and other belongings stolen by dippers [pickpockets] on the approach to the stadium," he said on Monday. 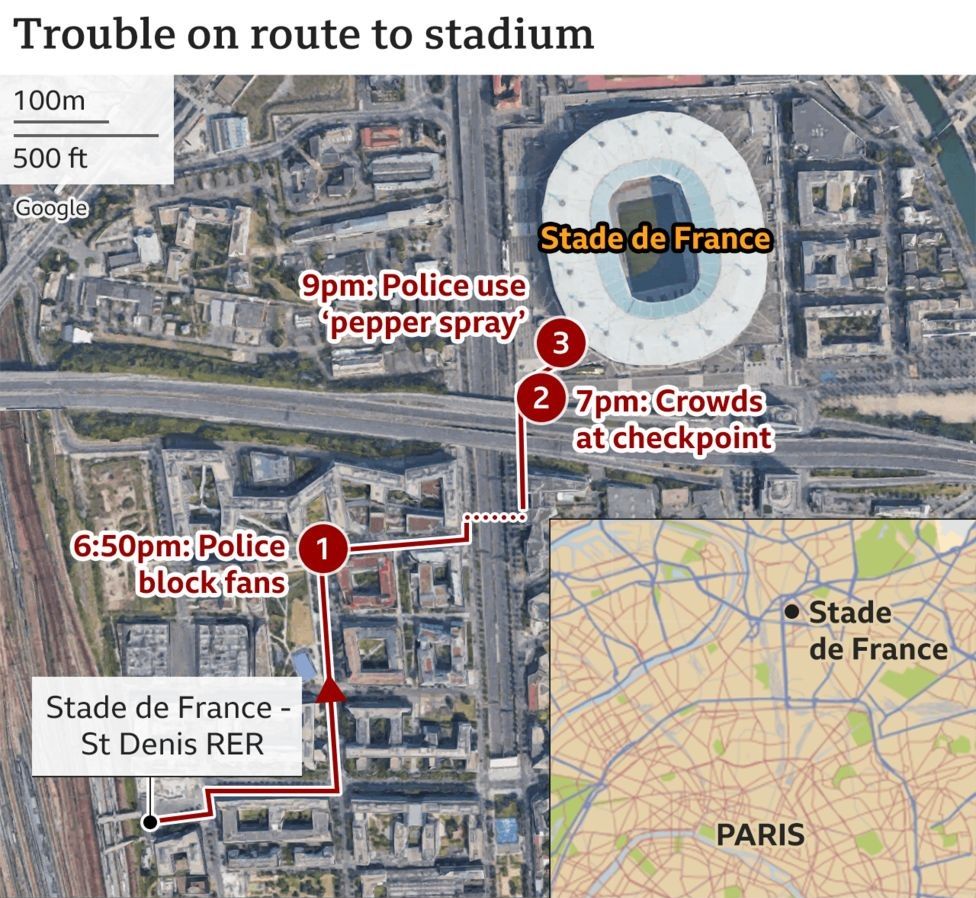 Some eyewitnesses described gangs of young people hanging around outside the station after the match, saying they were mugging people and assaulting them without being challenged by police.

Others said local trouble-makers made it inside the stadium. Mr Carter said that inside the Stade de France, several French youths attempted to steal Liverpool fans' seats.

Inside the stadium, Suzanne Gower had arrived with nearly two hours to go before kick-off. "The Liverpool side had no fans and the Madrid end was really full so you know something outside was happening," she said.

Five minutes before kick-off was due, at 20:55 local time, Uefa announced that the start of the match was delayed "for security reasons" until 21:15. Inside the stadium, signs said the delay was "due to the late arrival of fans at the stadium". 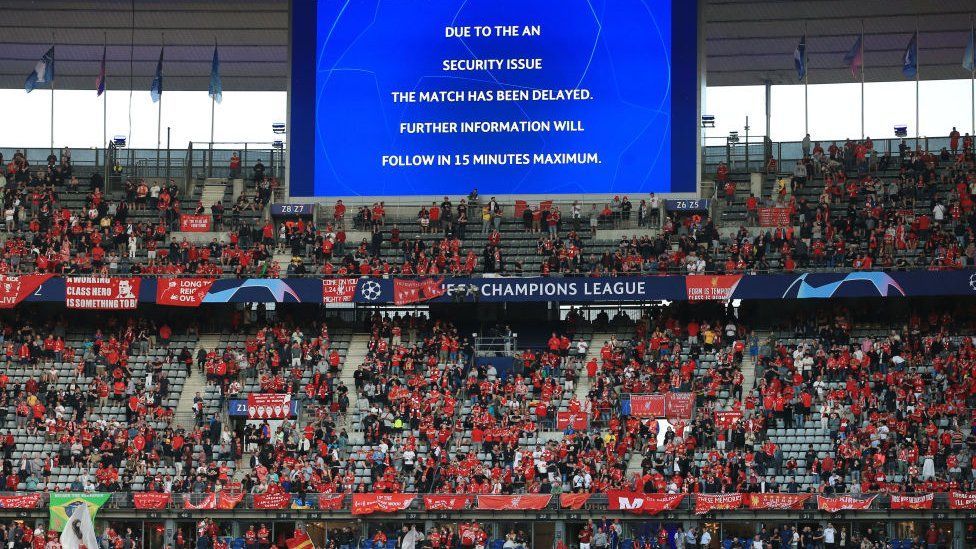 Then at 21:14 Uefa announced a further delay to kick-off. Eventually, the match got underway at 21:36.

Even then, there were many empty seats in the Liverpool end, with some fans reporting they were not able to get into the stadium until half-time.

Liverpool fans say police lined up in front of them before the final whistle - but ignored the Real Madrid supporters' section.

Chaos erupted again when the exit gates were opened, with Mr Carter saying local youths rushed the gates, while police fired what appeared to be tear gas into the crowd. 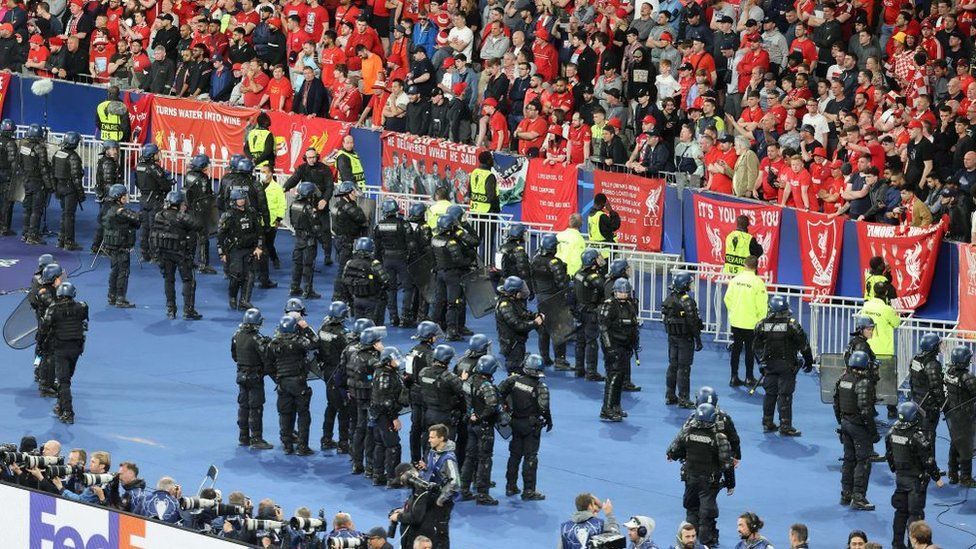 French interior minister Gerard Darmanin said the disruption was due to "thousands of British 'supporters', without tickets or with counterfeit tickets" who "forced entry and sometimes assaulted the stewards".

But Ms Gower, a lawyer who worked on the inquests into the Hillsborough disaster, said: "The way this event was being policed was all wrong and incredibly dangerous."

And fan Adrian Tempany reflected later: "My experience at Stade de France on Saturday was the 2nd worst I've had at a football match, after Hillsborough."

"In my opinion, French police and Uefa nearly caused a disaster," he added.

The French government has suggested there were between 30,000 and 40,000 ticketless Liverpool fans who attempted to gain entry to the stadium.

Uefa declined to give details of the anti-fraud measures used on the tickets at the Champions League final, saying: "Tickets contain a number of security features and the design is different for every single competition."

But Prof Clifford Stott from Keele University, an expert in crowds and policing, cast doubt on French authorities' claim.

He said on Monday there was no apparent evidence for what would have been "the largest-ever criminal conspiracy to produce and supply forged tickets at football".