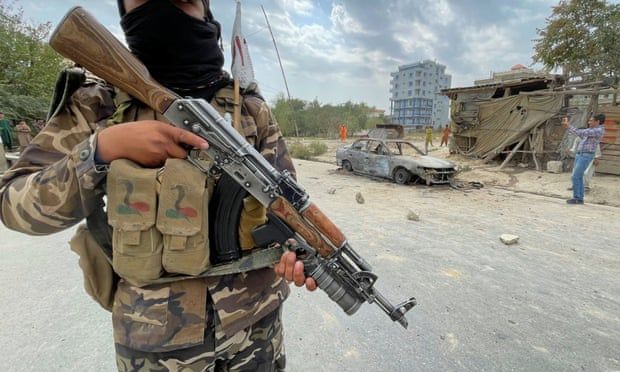 West may benefit from pragmatic approach after defeat to Taliban

Analysis: forging an acceptable agreement with new Afghan regime will require careful diplomacy
The history of war is littered with losing parties struggling to accept the terms or even the fact of their defeat. At the end of the first world war, Germany’s then chancellor Philipp Scheidemann announced: “May the hand wither that binds us in such shackles.”

Some of the demands by the US and its allies on how the Taliban must behave now contain similar self-denial. It is as if the US remains in control of Kabul, as orders are issued on future Taliban actions ranging from the release of refugees to the future makeup of the government, its counter-terrorism policies and the place of women in society.

Emmanuel Macron, the French president, has adopted a more pragmatic tone, stressing that talks with the Taliban do not imply recognition and saying three clear conditions will be set by the west for such recognition.

He said the Taliban needed to respect humanitarian law by allowing those who qualify for asylum to leave, and also take a “very clear line” on terrorism. “If they make pacts with terrorist movements present in Afghanistan and the region then that will clearly be unacceptable for us all.”

The third area, he said, was human rights and “in particular respect for the dignity of Afghan women”.

Of course the west does hold some cards in setting out these conditions. With or without the support of Russia and China, it can withhold recognition of the Taliban government, block it off from billions of dollars in assets, ensure humanitarian aid only goes to third parties and – if Dominic Raab, the UK foreign secretary is to be believed – ask India, current chair of the UN sanctions committee, to place penalties on a wider group of Taliban leaders than at present.

But for the moment, with the encouragement of Qatar, which is the key intermediary with the Taliban, the emphasis is on forging an agreement with the new regime – although one potentially made more difficult by US air strikes killing civilians in Kabul in pursuit of Islamic State.

On Sunday night, the US said the Taliban had reached an agreement with about 90 countries to let all foreigners and Afghans with travel documents leave Afghanistan. It was noticeable that the Taliban were not co-signatories, however.

The thinking behind the mass statement seems instead to test the Taliban’s bona fides. The Norwegian foreign affairs ministry, for instance, said: “We hope that the civilian airport can eventually open and that there will be civilian flights so that Afghans can leave the country safely. We gave a clear message to the Taliban: those who want to do so must be allowed to travel safely.”

A US-chaired meeting in Doha on Tuesday of like-minded partners in the G7, as well as Turkey and Qatar, was due to further test Taliban assurances and assess what can be asked of them.

The Taliban, on the one hand, might think it sensible to rid the country of those they consider to be infected with western thinking, but on the other they are reluctant to let the “best and the brightest” in the country flee.

Stories of former government supporters being rounded up suggest the Taliban is not rushing to open the exit door, while images of all-male university student gatherings are a sign that women have already been driven back into the home. Social media images have shown former Al-Qaida leaders driving through Kabul.

The Taliban are past masters at drawn-out negotiations, a point made by John Bew, Boris Johnson’s chief foreign policy adviser, when he co-authored a 2014 paper entitled Talking to the Taliban that argued “a shift towards moderation by the Taliban has not been borne out by events on the ground”.

The overall talks process, the report published by the Belfer Centre found, “had been hampered by wishful thinking, misuse of historical lessons, reactive and tentative policy-making,” including inconsistencies in a “talk and fight” strategy. It also warned that Pakistan had not been involved, and as the Soviet experience with the Taliban showed, Pakistan can act as effective spoilers.

Since that report, it is not clear much has changed. The Taliban consistently promised one thing in Doha and then did another in Herat. As a result, a premium is now being placed at the Doha meeting on Taliban deeds, not words.

The presence of Turkey at the Doha meeting shows discussions are still live about Turkish involvement in the running of Kabul airport to airlift further refugees. Turkey has been touting this role for months, eyeing a chance to gain a foothold in Afghanistan and at the same time helping the Biden administration. But talks appeared to break down when the Taliban required the Turkish military to leave Afghan soil. Germany said on Wednesday it has now offered to fund a Turkish operation.

Macron has been pushing hardest on the idea of UN support for a safe zone in Kabul to help with evacuations and to send a message to the Taliban that “if you want to move forwards and have a country open to the rest of the region and the world, you have to respect humanitarian rules and let all those men and women who want to be protected have protection”. France is looking for Russian and Chinese support at the UN security council summit in New York on Tuesday evening, but it is not guaranteed.

But all this is not just contingent on Taliban agreement. Neighbouring countries that might become processing centres, such as Uzbekistan, Tajikistan, Pakistan and Qatar, need to agree to accept any refugees sent by plane from Kabul airport or overland. Heiko Maas, the German foreign minister, is on a four-day trip through these countries to find out what they need. It might be sensible to extend his itinerary to Iran where tens of thousands have crossed the border.

The trip is the kind of deeply practical diplomacy that has been lacking in recent months, especially from the UK Foreign Office.
#Boris Johnson  #Dominic Raab  #Afghanistan  #Johnson  #Raab
Add Comment