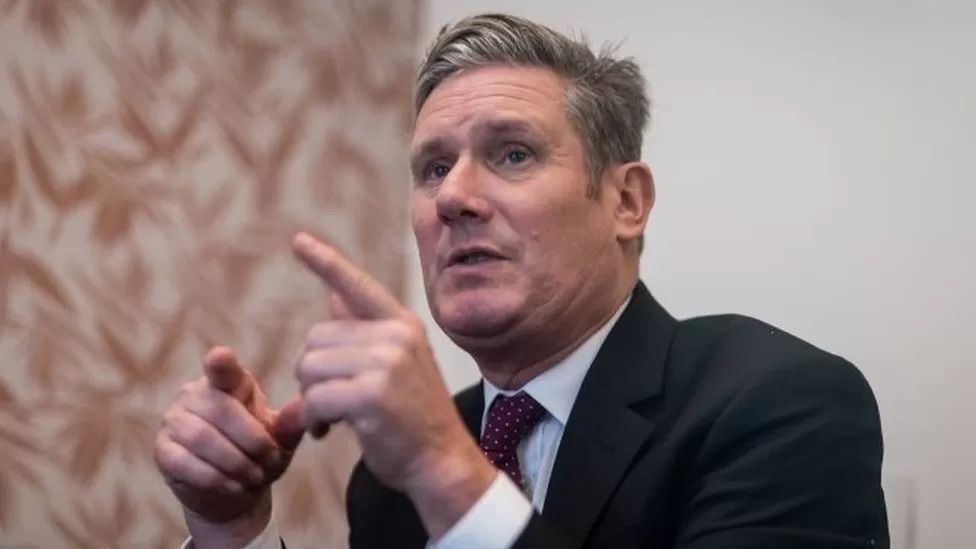 We must wean economy off immigration, Labour leader to warn businesses

The days of "cheap labour" must end to wean the UK off its "immigration dependency", Labour leader Sir Keir Starmer will tell business leaders.

Sir Keir will call for a plan to train British workers and move the economy away from its "low-pay model".

But he will accept the need for skilled foreign workers and promise a "pragmatic" approach to immigration.

His speech comes at a time when businesses are calling for more migrant labour to boost economic growth.

The Labour leader's speech to the Confederation of British Industry (CBI) conference in Birmingham will follow that of Prime Minister Rishi Sunak on Monday.

Mr Sunak told business leaders having "proper control of our borders" was one of the immediate benefits of Brexit and said curbing illegal migration was the "country's number one priority right now".

"People are arguing against immigration - but it's the only thing that has increased our growth potential since March," Mr Danker said.

There was considerably less migration during the Covid-19 pandemic than in previous years and the number of EU citizens moving to the UK has dropped since the UK left the European Union.

The Office for Budget Responsibility has forecasted a decline in net migration, with the number expected to settle at 205,000 a year from 2026 onwards.

In his speech, Sir Keir will set out what the UK's immigration policy would look like under a Labour government, should the party win the next general election.

He will promise an immigration system that works better for the needs of business and recognises the need for skilled workers from abroad.

But he will stress that any changes to a points-based migration system "will come with new conditions for business".

"We will expect you to bring forward a clear plan for higher skills and more training, for better pay and conditions, for investment in new technology," he is expected to say.

"But our common goal must be to help the British economy off its immigration dependency. To start investing more in training up workers who are already here."

Sir Keir will outline Labour's plans for reform, which include:

Sir Keir spoke about immigration in an interview with the BBC last week, saying the UK was recruiting too many people from overseas into the NHS.

The rise of legal migration to the UK was one of the most prominent political issues in the country ahead of the EU referendum in 2016.

Former Conservative Prime Minister David Cameron once promised to get immigration down to the tens of thousands a year.

Net migration - the difference between people coming to the UK and those leaving - has been over 200,000 since the late 1990s.

Asked how Labour's policy differed from that of the Conservatives, shadow business secretary Jonathan Reynolds said his party would demand businesses implement better pay and conditions, particularly in the care sector.

He also said Labour would introduce flexibility to the apprenticeship levy, so companies could spend the money on other forms of training.

Under Sir Keir's leadership, Labour has ruled out a return to the EU single market, which guarantees citizens of member states the freedom to live and work anywhere in the bloc.

Labour's policy on Brexit has divided the party, with some calling for a much closer relationship with the EU on different terms.

Sir Keir's speech comes as Mr Sunak denied that ministers could look to realign the UK with EU laws.

Some Tories have been angered by suggestions the government was weighing up a Swiss-style relationship with the EU.

But the prime minister told the CBI conference on Monday that the UK "will not pursue any relationship with Europe that relies on alignment with EU laws".

Brexit is "already delivering” benefits and opportunities for the UK, the prime minister says.