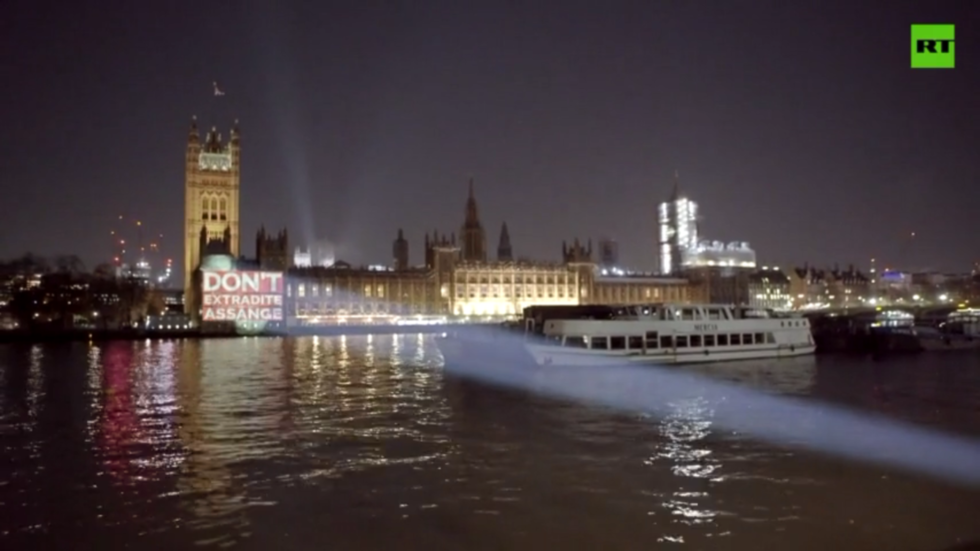 Campaigners have projected the footage of an American airstrike on Iraqi civilians, originally exposed by WikiLeaks, onto the parliament building in London, to protest against the proposed extradition to the US of Julian Assange.

Clips from the infamous 2007 footage were projected onto Westminster Palace, where both houses of parliament are located. The same video was projected on the wall of the Belmarsh maximum security prison in London, where the WikiLeaks co-founder is awaiting his US extradition trial. The images on the buildings' walls included photos of the activist along with slogans like 'Don't extradite Assange' and 'Journalism is not a crime.'

The anti-extradition group behind the stunt argues that the prosecution of Assange is unlawful because he did journalistic work, and all information published by WikiLeaks was of public interest.

The classified footage, which was published by WikiLeaks in 2010, revealed how the crew of a US AH-64 Apache attack chopper shredded a group of civilians in Baghdad, including two reporters working for Reuters, after mistaking them for insurgents.

Assange could face up to 175 years in prison if found guilty of all 18 charges that have been brought against him in the US. His extradition hearings are to start next week.