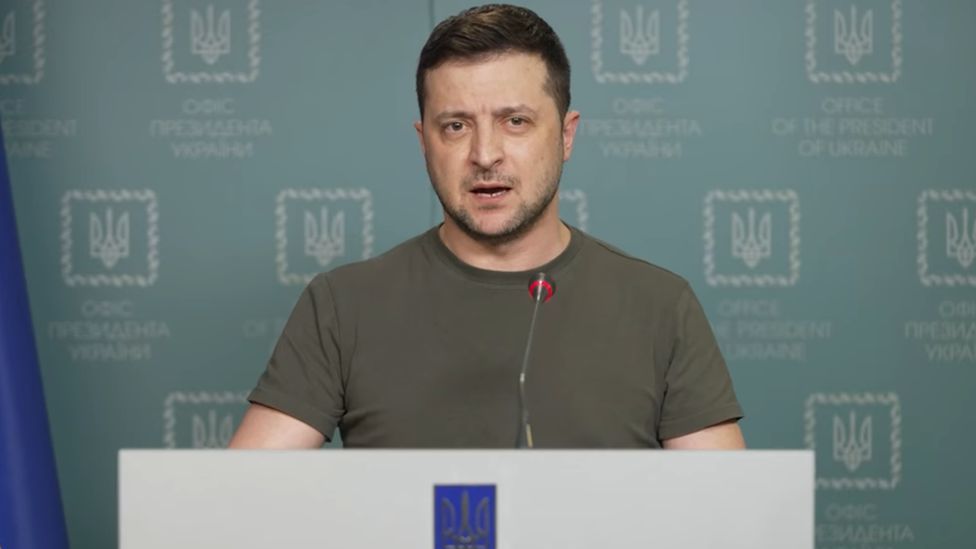 War in Ukraine: Zelensky urges Ukrainians to go on the offensive

In apparently rallying cry, the Ukrainian president says the country has withstood the invasion "together".
President Volodymyr Zelensky has told Ukrainians they have "withstood the blow" of Russia's invasion as he urged citizens to continue fighting.

In an impassioned speech delivered from Kyiv on Saturday night, Mr Zelensky told the country that the time has come for them to launch a fightback.

"You need to go out and drive this evil out of our cities," he said.

The rallying cry came alongside a plea to US President Joe Biden to source more combat jets for Ukraine.

US officials are believed to be in discussions with political leaders in Poland over the possibility of Warsaw providing Ukraine with a number of MiG fighter jets.

Poland has been slowly phasing the Soviet-era fighter out of use - and officials are understood to be weighing whether to provide them to Ukraine, where pilots are not trained to fly Western-made jets.

Some reports suggest they could be exchanged for new US-sponsored replacements.

The Russian invasion of Ukraine has entered its 11th day, with some experts suggesting the invasion may have stalled in places - despite President Vladimir Putin's insistence on Saturday that the operation is "going to plan."

While fighting has continued in many parts of the country, Moscow's forces have only captured one major Ukrainian city, Kherson - though it has made other key advances, such as seizing the Zaporizhzhia nuclear power plant on Friday.

Much of Russia's military has so far underperformed in Ukraine.

Prior to the invasion, it was assumed the army had undergone a radical re-haul, reorganising itself into so-called "Battalion Tactical Groups". These units of 800 to 1,000 men would operate in close coordination with tanks, drones and multiple-launch rocket systems to deliver a multi-faceted punch to the enemy.

Russian commanders, especially in the north, have manifestly failed to make full use of this modern kind of warfare.

Their vehicles have also suffered mechanical breakdowns and they appear to have underestimated the strength of Ukrainian resistance, losing large numbers of men and equipment.

So now, as grimly predicted, the gloves have come off.

Russian military tactics have reverted to a crude but tried and tested doctrine: encircle a city, pummel it with airstrikes, tank and artillery fire, and break the morale of both its defenders and those simply trying to survive.

International condemnation of the mounting civilian casualties will not bother President Putin. He's made it abundantly clear he has no intention of calling off this invasion.
#Joe Biden
Add Comment