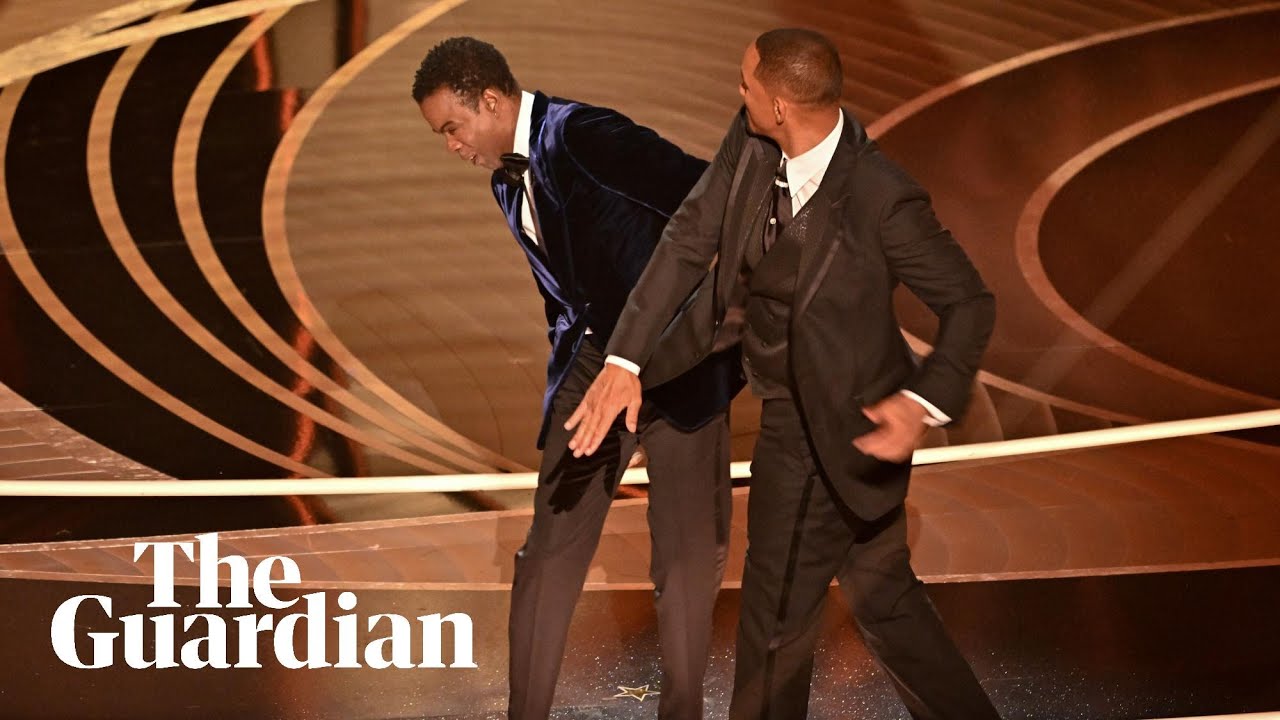 ‘Violence instead of words’: Will Smith condemned for hitting Chris Rock at the Oscars

Author Bernardine Evaristo is among the public figures to have condemned Will Smith for hitting Chris Rock at the Oscars, saying the actor “resorted to violence instead of utilising the power of words”.

In what quickly became the bombshell moment of the ceremony, Smith struck Rock in the face after the comic made a joke about Smith’s wife, Jada Pinkett Smith.

“Jada, can’t wait for GI Jane 2,” Rock said in an apparent reference to her shaved hair, which is a result of the hair loss condition alopecia. Smith walked on stage and hit Rock before returning to his seat and shouting: “Keep my wife’s name out of your fucking mouth.”

Evaristo, the Man Booker prize-winning writer, tweeted: “What a thing to wake up to. Only the fifth black man in nearly 100 years to win an Oscar for male lead, and the first in 16 years, resorts to violence instead of utilising the power of words to slay Chris Rock. Then he claims God and love made him do it.” The four other black men who have won an Oscar for best actor are Denzel Washington, Sidney Poitier, Jamie Foxx and Forest Whitaker.

Shortly after the incident, Smith was awarded the Oscar for best actor for his portrayal of Richard Williams in King Richard, and used his speech to make a tearful apology to the Academy and his fellow nominees, saying he wanted to be “a vessel for love”.

The moment has since spawned a frenzy of responses, from delighted memes to anger and concern. The Last Samurai producer, Marshall Herskovitz, called on the Academy to take disciplinary action against Smith, while actor Mia Farrow tweeted: “It was just a joke.”

Star Wars legend Mark Hamill described the slap as the “ugliest Oscar moment ever”, and the filmmaker Rob Reiner called for Smith to apologise. “He’s lucky Chris is not filing assault charges. The excuses he made tonight were bullshit,” Reiner said.

Actor Cary Elwes tweeted: “The ‘vessels of love’ I have known or admired never acted violently against another human being.”

In the UK, Keir Starmer said Smith’s actions at the Oscars fell on the “wrong side of the line”. The Labour leader said: “Of course there are circumstances and anybody who insults family members excites something quite emotional in all of us. But, on the other hand, to go up and hit someone in that way is wrong, I’m afraid … It was the Oscars, it’s got all the cameras there, millions of people watching.”

In an open letter to Smith, the Bishop Auckland MP Dehenna Davison pleaded with the actor to use his platform for good and highlighted the impact of using violence, which resulted in her losing her father, Dominic, to a single-punch attack when she was 13.

“My life was turned upside down, and it was this that led to me getting involved in politics,” she wrote. “I wanted to do all I could to help ensure other children wouldn’t have to experience losing a parent, missing school to sit through court, or attending years of therapy, as I did.”

Davison set up the all-parliamentary group on one-punch assaults and invited Smith to meet with the group.

Comedian Kathy Griffin tweeted: “Let me tell you something: it’s a very bad practice to walk up on stage and physically assault a comedian. Now we all have to worry about who wants to be the next Will Smith in comedy clubs and theaters.”

While many were appalled by Smith’s behaviour, seeing it as an example of the normalisation of violence, they also said Rock’s comments went too far, especially after a previous gag he made about Pinkett Smith during the 2016 Oscars.

“Violence isn’t OK. Assault is never the answer,” tweeted actor Sophia Bush. “Also? This is the 2nd time that Chris has made fun of Jada on the Oscars stage and tonight he went after her alopecia. Punching down at someone’s autoimmune disease is wrong. Doing so on purpose is cruel. They both need a breather.”

The UK education secretary, Nadhim Zahawi, said: “Violence is never the answer to any problem-solving,” but added: “I think we should also remember – and I’m the education secretary – that actually sometimes even a joke can be below the belt. When a joke is about somebody’s wife and her illness – she has alopecia – it is wrong.”

US congresswoman Ayanna Pressley, who has also been open about stigma faced with alopecia, tweeted and deleted a defence of Smith. “Shout out to all the husbands who defend their wives living with alopecia in the face of daily ignorance and insults,” read the deleted tweet.

The Good Place actor Jameela Jamil also defended Smith and posted a quote from Malcolm X that said “the most disrespected person in America is the black woman”.

Smith later attended the Vanity Fair afterparty and was filmed dancing to his songs Gettin’ Jiggy Wit’ It and Summertime with his Academy Award in hand.

The Academy of Motion Picture Arts and Sciences, which organises the Oscars, tweeted that it “does not condone violence of any form”, while the Los Angeles police department told Variety that Rock had “declined to file a police report”.