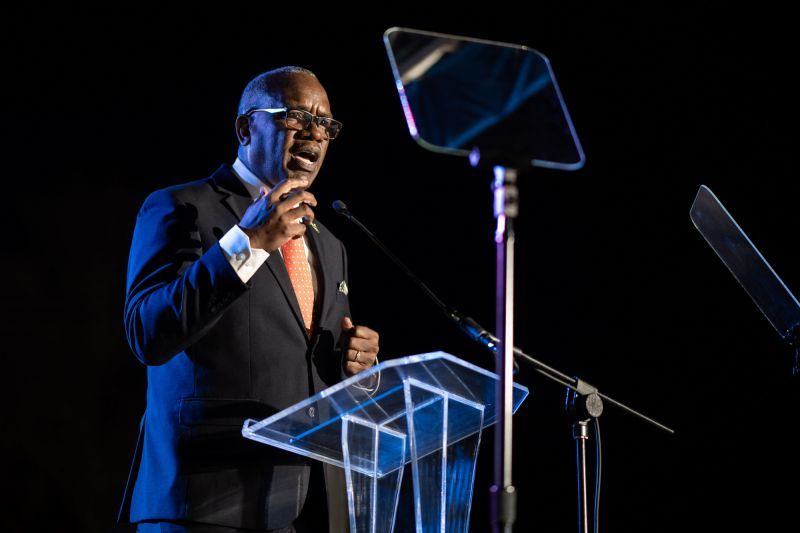 With an estimated 600 people or more gathered at the Bryan-Roach campaign headquarters on St. Croix filled with enthusiasm, Governor Albert A. Bryan and Lieutenant Governor Tregenza A. Roach announced their bid for reelection Tuesday night, May 10, 2022, highlighting some of what the campaign says are 100 achievements, including one of the most important successes in USVI history: staving off collapse of Government Employees' Retirement System.

The announcement also had momentum online, with live viewership on the Consortium's Facebook page almost doubling that of Sens. Kurt A. Vialet and running mate Janelle K. Sarauw, who announced their bid last Thursday. At time of publishing, the Bryan-Roach event had nearly 11,000 views on the Consortium's FB platform, and several radio stations carried the event live as well, which broadened the audience.

The well-orchestrated presentation included several endorsements — from former Senator Roosevelt David to former Delegate to Congress Donna M. Christensen. "I supported Albert Bryan and Tregenza Roach in 2018, and I did it because if this territory that we love was going to progress, we knew we needed to change course. That's what they said they would do, that's what they did, and I am here to say I am not going back, we will not go back," Ms Christensen said.

Throughout the event and leading up to the governor's and lieutenant governor's speeches, supporters spoke of the accomplishments of the administration and cast aside talk that not much was done to improve the USVI during Mr Bryan's tenure. Mr Vialet and Ms Sarauw have criticised the administration for ongoing health care issues in the territory, the slow pace of disaster recovery projects, and what they contend is a failing education system. The administration has countered by stating that change takes time, while pointing to the successes of the governor.

Governor Bryan was introduced by Ashley Scotland, who currently serves as vice chair of the St Croix District of the Democratic Party. Making an impassioned case for the governor's reelection, Mr Scotland meticulously conveyed the administration's achievements — from shoring up the territory's finances with belt-tightening, which Mr. Scotland said resulted in annual surpluses not seen in the last 15 years, to the repayment of tax refunds. Mr. Scotland and other speakers also highlighted the administration's handling of Covid-19 — which even Mr Vialet has praised — with administration officials placing Mr. Bryan's execution on par with the best in the US and ahead of many states.

'We did it together'- Gov Bryan

Taking the stage, Governor Bryan appeared confident and ready for the race. "Are you excited as I am?" he asked forcefully to the crowd, already on their feet and cheering. "I just want to say we've gotten a lot done in the last three years and we didn't do it alone, we did it together because the grace of God has shined upon the Virgin Islands and blessed us to eternity."

Mr. Bryan recalled his years of preparation to be governor and said that while some may say he is a lucky man, luck itself is described as when preparation meets opportunity. "Throughout my life I have tried to be prepared for the opportunities that come before us, and the opportunities to serve, because some people think that because they're elected that they're good. No, they're just popular. I wanted to be good so I could get elected," he said. "And in doing that I prepared to serve the people, and there were so many people in front of me that I thought would be governor. At that time, I said, 'listen, if I have to serve to help them, that was my role."

While Mr Bryan has said he loves being governor, on Tuesday night he admitted that the pressure gets heavy sometimes, including what he appeared to suggest were baseless rumors that circulate the community and radio talk shows. "It's not easy. It's a lot of heavy burdens; my family's under pressure, my friends are under pressure... Sometimes it gets heavy. It gets heavy watching my people bear it," he said.

He recalled after his election in November 2018 being told that the government would run out of money in three months. "It's been not three months, but three years after and we ain't miss a payroll yet," he said. "Not only that, but we made good on all the election promises and the raises that they gave in the last administration — we paid those people too.

"We used to be in the Department of Finance counting pennies on how we're going to pay the rent this month. Now we got money for days — 60 days cash-on-hand every single day of the week, ladies and gentlemen.

"But we didn't waste that money, we made good on the commitment to pay teachers, policemen and public servants a fair wage.

"When we took this government we had the mess of the hurricanes to straighten up. People forget, over $600 million in unpaid bills, FEMA cut us off, we only had $500 million obligated. All the billions of the election suddenly vanished and we realized we were broke. But that didn't stop us; we kept going and last year we paid over $700 million in checks out to people," the governor said.

Mr Bryan also spoke about roads being paved across the territory, and said such efforts would continue throughout the year.

Lieutenant Governor Tregenza A. Roach, who spoke before the governor, weaved biblical themes into his speech, painting the administration as the right team for this moment to lift the USVI to prosperity.

Bryan Administration 'is for such a time as this'- Roach

Using the story that tells of Esther's heroism in saving the Jews of Persia by leveraging her relationship with King Xerxes, Mr Roach said that through the last three and a half years, the Bryan-Roach administration "had come to the kingdom for such a time as this." Backing up his claim, the lieutenant governor hailed the administration's handling of the Covid-19 pandemic among other wins. "By all indicators we performed in a manner superior to many mainland jurisdictions, which sometimes think that because we are a territory of the United States we cannot lead ourselves," he said.

He added, "We conducted our vaccine program so effectively and so efficiently that people were leaving their home states, booking Airbnbs and other accommodations here, and staying in some cases as long as they could and working virtually in order to get both doses of the vaccine here in the Virgin Islands."

The lieutenant governor acknowledged that there remains a lot of work to be done, but defended the administration by stating that some things take time. "Even the staunchest cynic would have to admit that the Bryan-Roach team has proven time and time again that we have come to the kingdom for such a time as this. And I'm sorry, but you're going to have to manufacture any evidence to the contrary," he said. 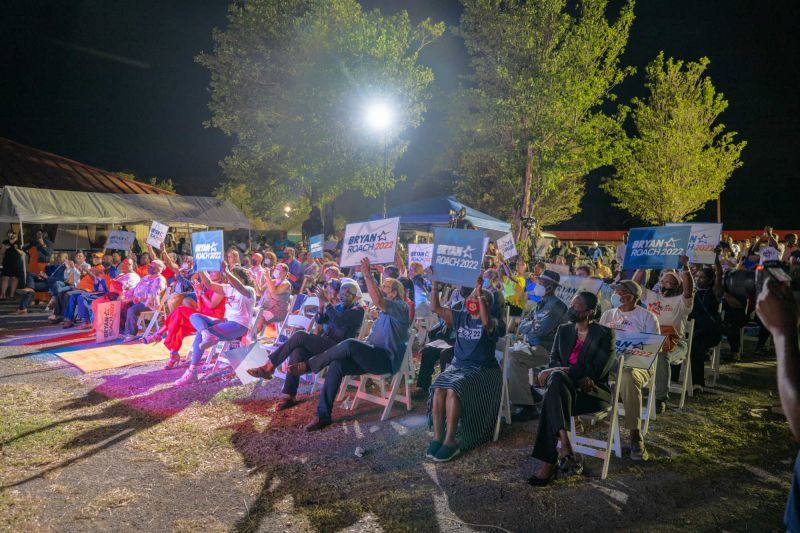 Supporters of the Bryan-Roach team, including many cabinet members, cheered during the reelection bid announcement on Tues. May 10, 2022. 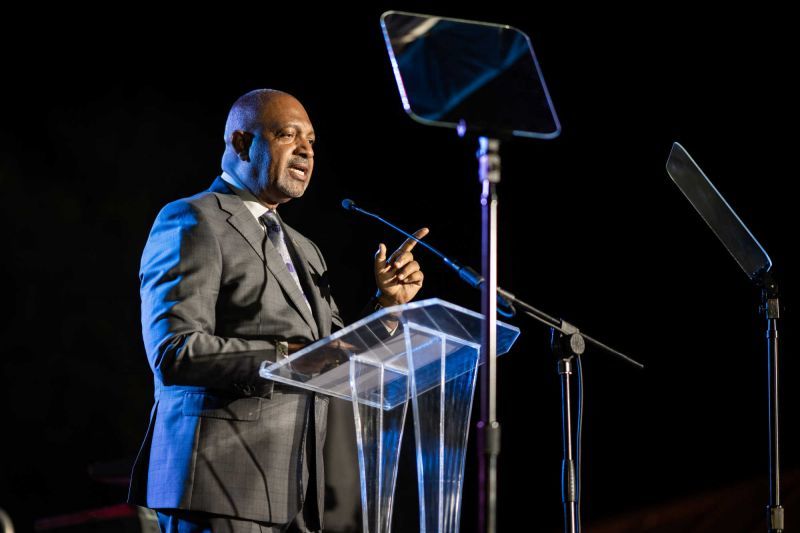 Lt. Gov. Roach spoke during his speech about the successes of the Bryan-Roach administration.