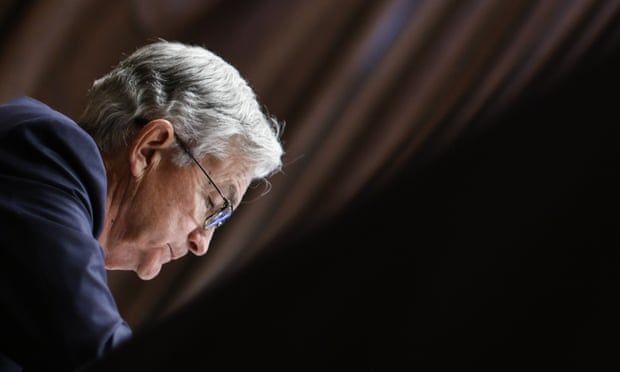 US Federal Reserve raises interest rates for first time since 2018

The Fed raised rates by a quarter percentage point from near zero, in what is expected to be the first in a series of raises in the coming months.

In a statement, the Fed said economic indicators and employment figures had “continued to strengthen”, but noted that inflation remained elevated and the invasion of Ukraine was not only “causing tremendous human and economic hardship” but was “likely to create additional upward pressure on inflation and weigh on economic activity” in the US.

The Fed has a dual mandate – to maximize employment and keep prices under control. The job market and the wider economy have made an impressive recovery from the lows of the pandemic, thanks in part to Fed rate cuts and a massive stimulus program, but prices have increased by 7.9% in the year through February – the highest rate of inflation in 40 years.

Supply chain issues have led to sharp increases in a variety of areas including used cars, food and utilities that are causing particular hardship for lower-income Americans.

The Fed initially dismissed rising prices as “transitory”, but has since acknowledged high inflation is likely to be around for some time. Supply problems that appeared to be normalizing earlier this year are also now feeling the impact of the war in Ukraine and face further setbacks as China imposes new lockdowns to curb new coronavirus outbreaks.

At a press conference, Fed chair Jerome Powell said the bank was “acutely aware” that it must tackle inflation. “I’m old enough to remember what very high inflation was like,” he said. “We’re strongly committed as a committee to not allowing this higher inflation to become entrenched.”

The Fed is projecting six more rate rises this year. One Fed committee member, the St Louis Fed president James Bullard, pushed for a larger half-percentage-point increase this month. “If we conclude it will be appropriate to raise interest rates more quickly, then we’ll do so,” said Powell.

Raising rates too quickly threatens to push the US into recession. This week, CNBC’s Fed Survey – which gauges the opinions of fund managers, strategists and economists – put the probability of recession in the US at 33% in the next 12 months, up 10 percentage points from the 1 February survey. The latest survey put the chance of a recession in Europe at 50%.

With inflation running at close to four times the Fed’s target rate of 2%, Powell has made clear that the central bank will raise rates in an attempt to curb rising prices. But some economists question how much impact the Fed can have on such a complex issue.

JW Mason, associate professor of economics at John Jay College, said a quarter-point rate rise was unlikely to have much impact on inflation or the wider economy. “It is a strange feature of the way we think and talk about economics today that we have given this wildly outsized importance to this one policy tool used by this one part of government,” he said.

Mason said he expected inflation would ease without the Fed’s intervention over the next year – albeit “less than we hoped it would”. He pointed out that car prices – until recently the largest source of inflation – were already falling. While he said a series of small rate rises were not likely to have a major impact overall “a sufficiently large rise in interest rates will have a substantial negative effect on real economic activity”.

Mason said other branches of government were better able to deal with price issues in the broader economy, such as soaring rents and home prices or gas and utility bills, and that tools such as price caps or stimulus cheques could be used to alleviate hardship.

Powell said he expected US inflation to ease later this year, with the Fed predicting it will end the year at 4.1%. But he reiterated that the war in Ukraine was likely to lead to supply chain disruptions and higher prices. “No matter what happens, this is a committee that is determined to use its tools to make sure that higher inflation does not become entrenched. And so we are determined on that front and will deal with what comes,” said Powell.
#Coronavirus  #Covid

Oh ya 144 days ago
Oh wow the US government says inflation is running at 7.5 % likely more like 15-18 if you figure it out like it was in 1980 and the raise interest by 1/4%. What a joke by i guess that all you can do after years of bad policy making.
View all comments (1)Add comment