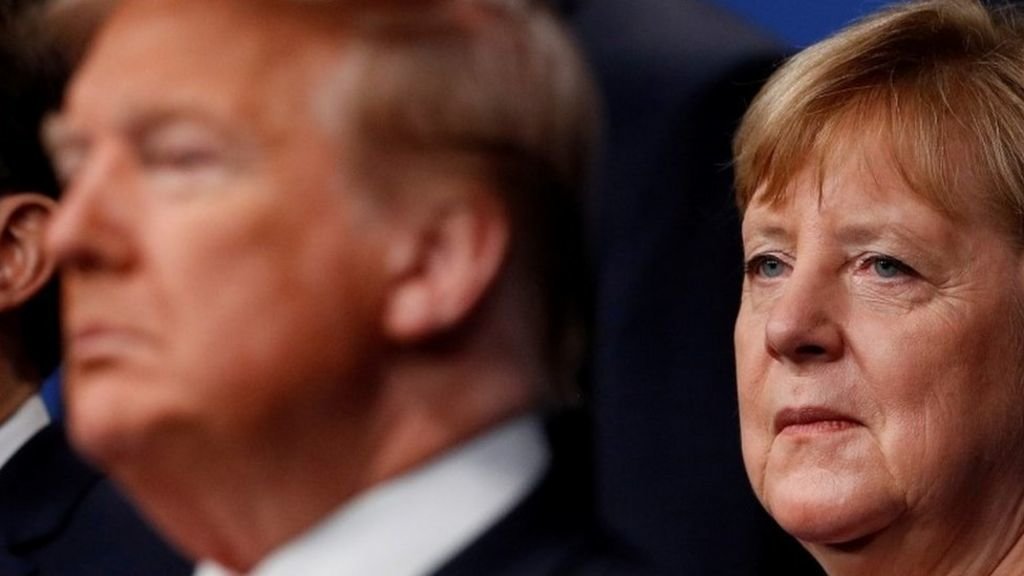 American sport, culture and, many would say, values pump through the veins of Germany. Which is why so many people here - including the players tackling each other with enthusiasm - are also keeping a close eye on the upcoming US presidential election.

"You're kind of like a bystander," says Christoph, a quarterback. "You have no influence but in the end it does influence you."

To stroll under reddening trees through the small market which stands on Berlin's Kennedy Platz is to get a glimpse of how closely Germany and America have been bound, how deeply rooted the transatlantic relationship. 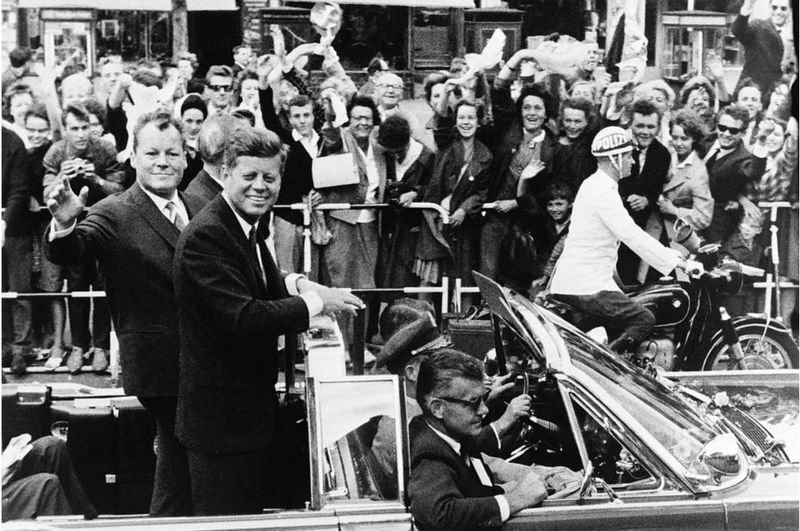 President Kennedy was given a warm welcome in Berlin

Beyond the stalls packed with pumpkins and flowers, looms the impressive stone edifice of Rathaus Schoeneberg where, nearly 60 years ago, John F Kennedy told a wildly cheering crowd packed deep into the neighbouring streets, "Ich bin ein Berliner" ("I am a Berliner").

Ute, who was a child at the time, pauses as she buys fruit to explain why today there's so little enthusiasm among Germans for the current American commander-in-chief.

"For my generation - born after the second world war - Americans were a great example of freedom and democracy. That's ended with Trump." 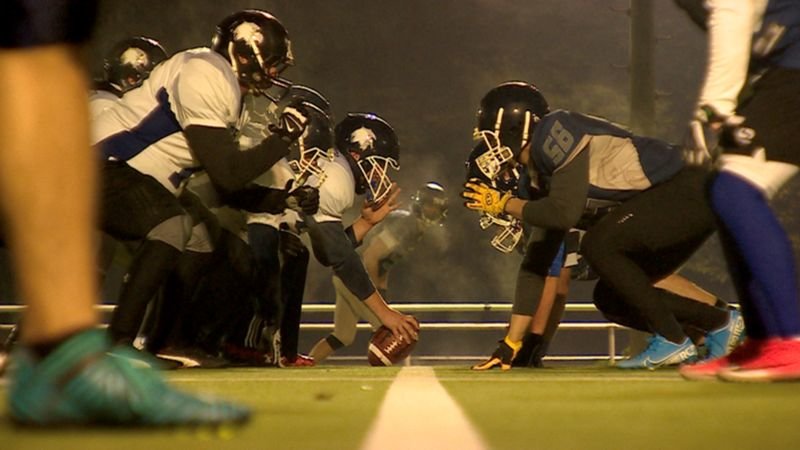 For her part, the German chancellor has never warmed to President Trump's style or his politics. She was openly dismayed by his dismissive attitude towards Nato, his withdrawal from the Paris agreement on climate change, and his rejection of the Iran nuclear agreement.

The lack of personal chemistry between the leaders has been in stark contrast to the relationship Mrs Merkel developed with Barack Obama. It's no secret in Berlin that the government has struggled to replicate the same level of co-operation with the Trump administration.

But Mrs Merkel won't be dealing with the White House for much longer. Germany is looking ahead to its own significant election. 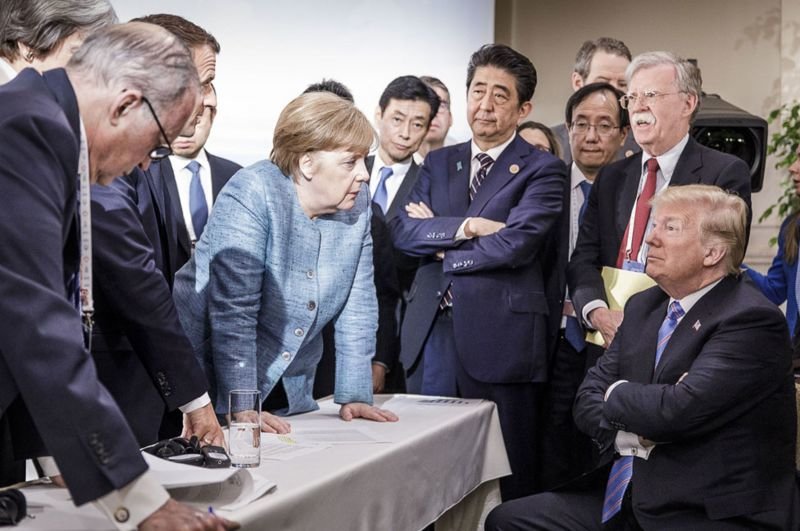 The body language between Merkel and Trump tells a thousand words

Norbert Roettgen, who chairs the German foreign affairs committee, is one of the candidates hoping to replace Mrs Merkel when she stands down next year.

"The four years of the Trump presidency have meant that everything, very fundamentally, has been called into question. The very existence of Nato, the predictability of US foreign policy. It has been a disruption which we haven't seen since World War Two."

He, like many in Berlin, fears that another term for President Trump could do irreparable damage to the transatlantic relationship.

"We are concerned. I'm totally convinced that the prospect of another four years would not only mean that we're going to see more of the same, but I'm quite certain we would see an acceleration of everything we've experienced.

"Because then President Trump would not be under the pressure to be re-elected. He would be unshackled."


Who really decides the US election?

It took many in Berlin by surprise that the president of a country long considered an ally, a military and trading partner, has singled out Germany as a target for such fierce and sustained criticism.

There've been clashes over defence spending (Germany is increasing expenditure but still falls short of the 2% GDP target agreed with Nato), Germany's trade surplus with the US, and the construction of the controversial Nordstream 2 pipeline which will double the amount of Russian gas entering Europe via Germany.

But it was President Trump's decision to reduce the number of US troops stationed in Germany which perhaps most potently symbolised the depths to which the transatlantic relationship had plummeted. 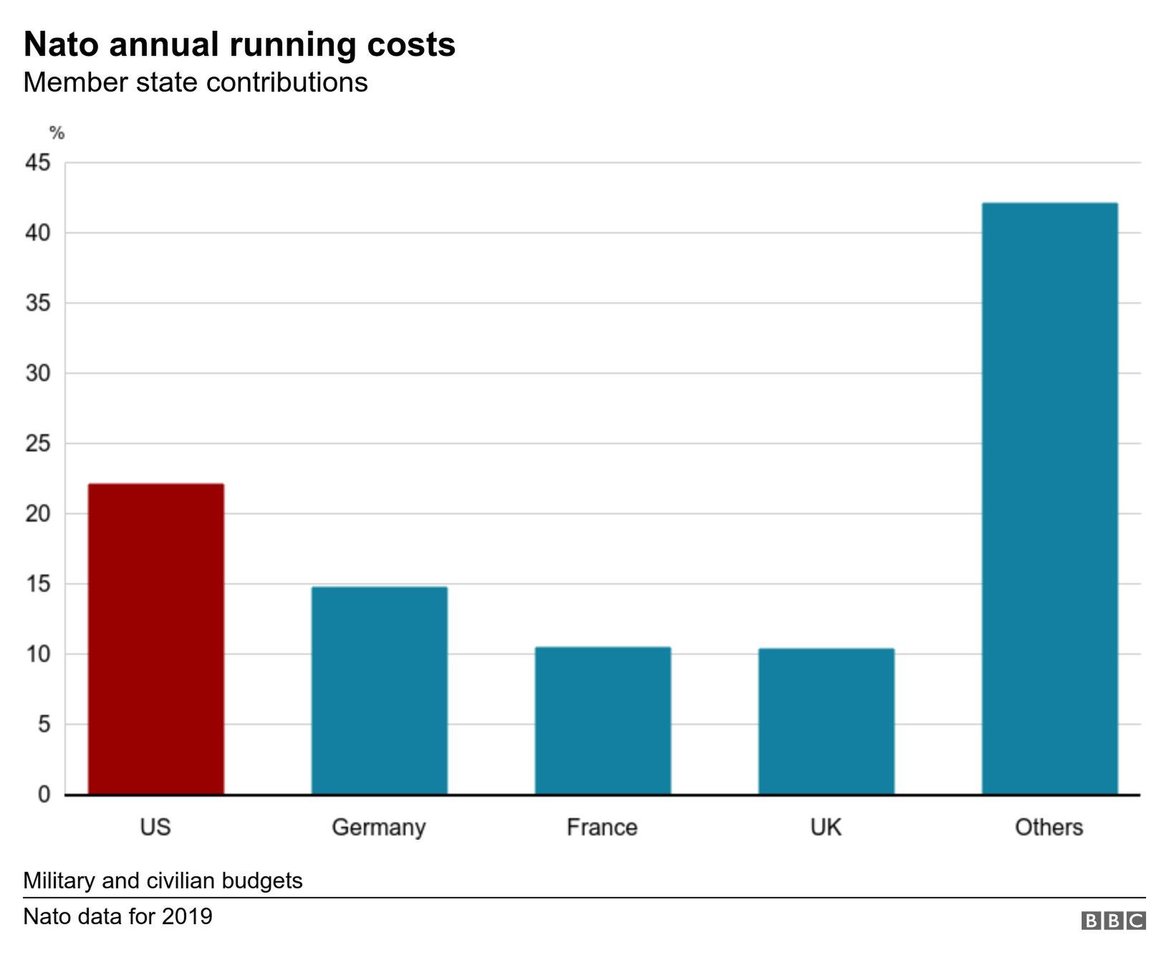 As Wolfgang Ischinger, former ambassador to Washington and the chair of the Munich security conference argues, as long as there are US troops on European soil, the actual location isn't particularly important but that "regretfully, trust has been lost over this issue".

He warns that a victory for Joe Biden - whose adviser for foreign policy has said he'd review the decision to withdraw troops from Germany - might not be the return to "some kind of transatlantic paradise" either because national differences over the big issues like climate change, Russia and China will remain.

However, most officials in Berlin expect such a political arena to be an easier one in which to negotiate and manoeuvre.

Ambassador Ischinger is not alone in seeing this election as a significant moment for Germany.

"The difficulties we've experienced in the last three and a half years have indeed served as a useful wake-up call for Germany to begin to reflect about its own responsibilities," he says.

Berlin has no desire for another four years of Donald Trump.

But, regardless of the outcome of the US election, there is a growing sense that Germany, which for so long considered America its teammate, may need to adjust its game plan.