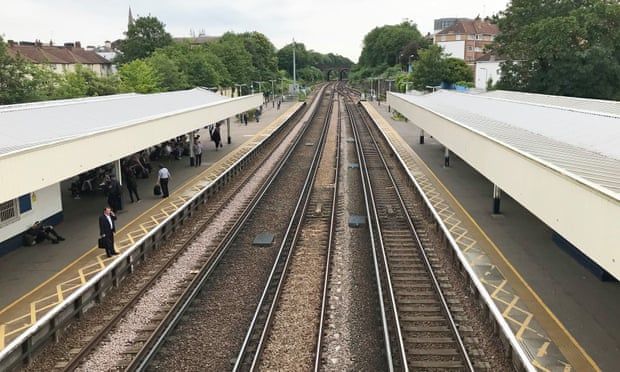 The National Union of Rail, Maritime and Transport Workers (RMT) said staff would be asked to vote on strike action over Network Rail’s plans to cut at least 2,500 maintenance jobs as part of a £2bn reduction in spending on the network.

Meanwhile, workers at train operators have been subject to pay freezes and changes to their terms and conditions.

The RMT said it was the biggest ballot it has undertaken of its members for a single dispute since the union was formed in 1990. The ballot opens on 26 April and closes on 24 May, so strike action could begin in June.

The dispute is just one of many battles over pay being fought across the UK as salary increases fail to keep up with a soaring rate of inflation that hit 7% last month and is forecast to rise to 10%.

The Communication Workers Union announced on Wednesday that Post Office workers were to stage a one-day strike on 3 May. The CWU said the action was in response to a pay freeze for 2021 and the offer of a 2% increase from April this year alongside a £250 one-off lump sum, which officials described as “exceptionally poor”.

The RMT’s general secretary, Mick Lynch, said: “Railway workers have had to contend with pay freezes, the prospect of losing their jobs and repeated attacks on their terms and conditions.

“Removing 2,500 safety-critical jobs from Network Rail will spell disaster for the public, make accidents more likely and will increase the possibility of trains flying off the tracks.

He added that “thousands of railway workers” had seen their living standards “plummet” and had “run out of patience”.

Network Rail was “disappointed” that the RMT had taken the decision to ballot for strike, its regional director Tim Shoveller said.

He said the pandemic had hit the railway hard adding: “We know travel habits and passenger demand have changed and the industry has to change, too. We cannot keep relying on government handouts, and so we must work together with train operators and our trades unions to save millions of pounds and deliver a more efficient railway.”

The Post Office strike will involve counter staff, as well as those in clerical, administration and call centres. So-called crown post offices will be affected as will smaller sub-post offices.

A Post Office spokesperson said: “We want to assure our customers that the vast majority of our 11,500 branches are unaffected by this decision and will remain open throughout the day.”

Meanwhile, at GlaxoSmithKline (GSK), UK workers have voted for industrial action for the first time in the pharmaceutical firm’s history. The workers, members of the union Unite, voted 86% in favour of strike action.

Unite said GSK, which produces products such as Sensodyne and Panadol as well as medications for combating critical illnesses, has a 48-hour window to make a “much-improved offer” or strike action will be announced.

Unite’s general secretary, Sharon Graham, said: “Never before have our members at GSK voted for strike action – their anger is a clear response to the company’s colossal corporate greed.”

A spokesperson for GSK said: “We recognise the impact inflation rates are having on people around the country and are strongly committed to supporting the skilled people who work in GSK manufacturing.

“We have offered a 4% increase to base salary, in addition to a one-off award – equivalent to around 2% of base salary – as well as an annual bonus for 2021 which paid out above-target.

“We are disappointed that the Unite union has taken the decision to strike, but remain committed to working with them to find a solution.”
Add Comment