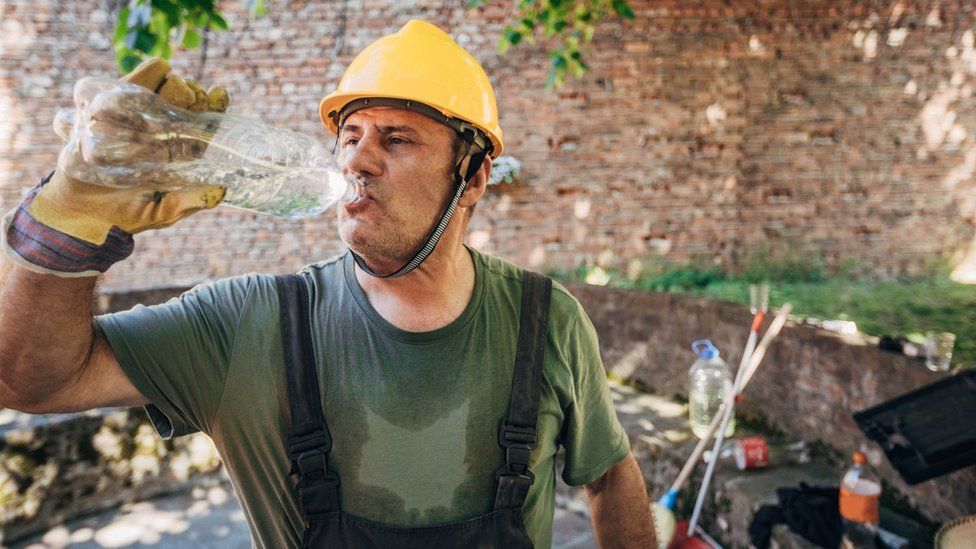 A union has called for a legal limit on how hot it can be in a workplace as a red warning for extreme heat begins.

The GMB union said workers should not have to contend with temperatures any higher than 25C, as forecasters predict a record high of 41C (106F) in England.

The Met Office's highest warning covers an area including London, Manchester and York on Monday and Tuesday.

There is currently no law in the UK or Ireland which states any given temperature is too hot or cold to work.

But workplaces should ideally be at least 16C - or 13C if the job is mostly physical - according to the Health and Safety Executive (HSE).

Responding to the call for a legal maximum, an HSE spokesperson said: "There is no maximum workplace temperature because every workplace is different.

"Responsibility to make workplaces safe and healthy lies with employers. Workplace temperature is a hazard that comes with legal obligations for employers like other hazards."

A number of MPs recently backed a campaign for a legal upper limit of 30C in most workplaces - or 27C for those doing strenuous work - but the government does not have to respond.

Lynsey Mann, the GMB's health and safety officer, said: "This hot weather is great for being on a sun lounger, but if you're trying to work through it's no joke.

"Bosses need to do everything possible to keep workplaces cool and, more importantly, safe."

She added: "Ultimately, there needs to be a legal maximum working temperature."

"This can be as simple as letting people wear more casual clothing and providing proper hydration."

TUC general secretary Frances O'Grady added: "We all love it when the sun comes out, but working in sweltering conditions in a baking shop or stifling office can be unbearable and dangerous."

She said businesses should let office staff work from home or adjust their hours to avoid rush-hour travel.

The Unite union has previously said employers have "a legal and moral duty to ensure workers' health is not damaged during the current hot weather."

It said manual workers were particularly vulnerable: "Employers should consider rescheduling work to cooler times of the day, and provide cooling areas such as shade or air-conditioned rest rooms.

"If workers show any signs of heat exhaustion, the employer should immediately ensure they stop work and are allowed to recover, without loss of pay."

Network Rail and Transport for London have warned people to only travel if necessary on Monday and Tuesday.

They have warned customers should expect delays, cancellations and short notice changes to services as a result of the heat.

Customers have been advised to carry water with them and not to board trains or buses if they feel unwell.