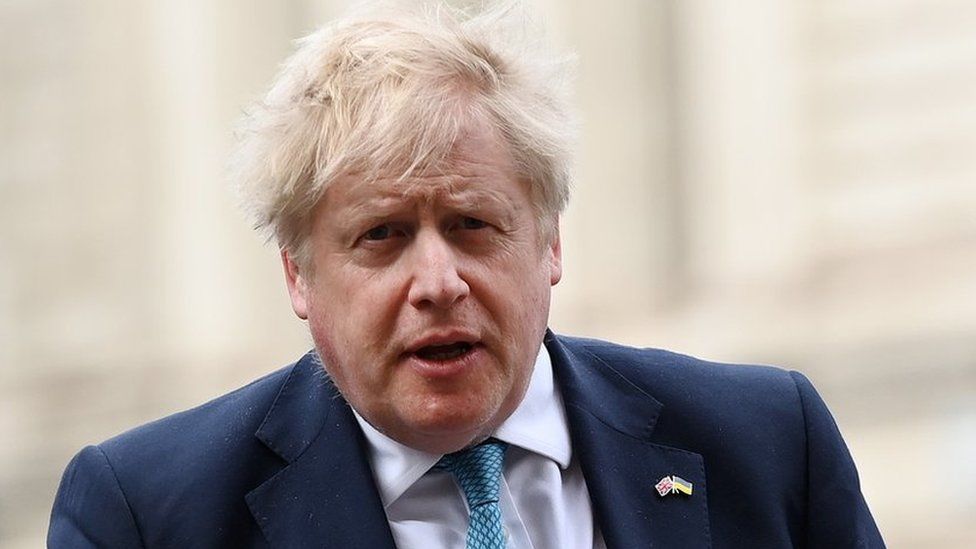 He described Russian President Vladimir Putin as desperate amid his "failing invasion" - and said the UK would step up sanctions and military support.

The BBC's Jeremy Bowen said at least 20 dead men, some with their wrists tied, were found on the streets of Bucha.

Ukraine says its forces have retaken the entire region around its capital, Kyiv.

But, as Russian troops have retreated from key towns, the toll of weeks of fierce fighting has been exposed. 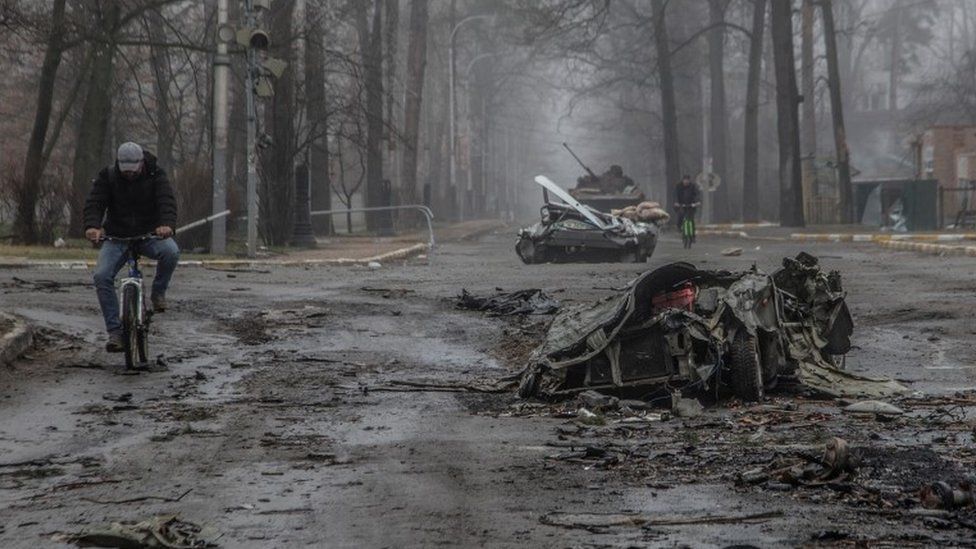 Flattened civilian cars on the streets of Bucha

Authorities in Ukraine have found what "looks exactly like war crimes" including the bodies of executed civilians and mass graves, a spokesman for Ukraine President Volodymyr Zelensky said.

Sergey Nikiforov told the BBC's Sunday Morning show: "We found people with their hands and with their legs tied up... and with shots, bullet holes, in the back of their head.

"They were clearly civilians and they were executed. We found half-burned bodies as if somebody tried to hide their crimes but they didn't have enough time to do it properly."

In a statement, Mr Johnson said: "No denial or disinformation from the Kremlin can hide what we all know to be the truth - Putin is desperate, his invasion is failing, and Ukraine's resolve has never been stronger."

He said the UK would not rest until justice had been served, as he confrimed extra funding and the deployment of specialist investigators to assist the International Criminal Court's investigation.

He also said the government would increase humanitarian support for Ukraine.

Earlier, UK Foreign Secretary Liz Truss insisted Russia must not be allowed to cover up "appalling acts" in Bucha and Irpin with "cynical disinformation".

The UK-led effort to expedite and support the International Criminal Court's investigation into war crimes in Ukraine was "the largest state referral in its history", she said.

She added that it was essential the international community continued to provide Ukraine with military and humanitarian support - and step up sanctions.

Other nations have also condemned Russian forces' actions. US Secretary of State Antony Blinken described the images of bodies in the streets of Bucha as a "punch in the gut".