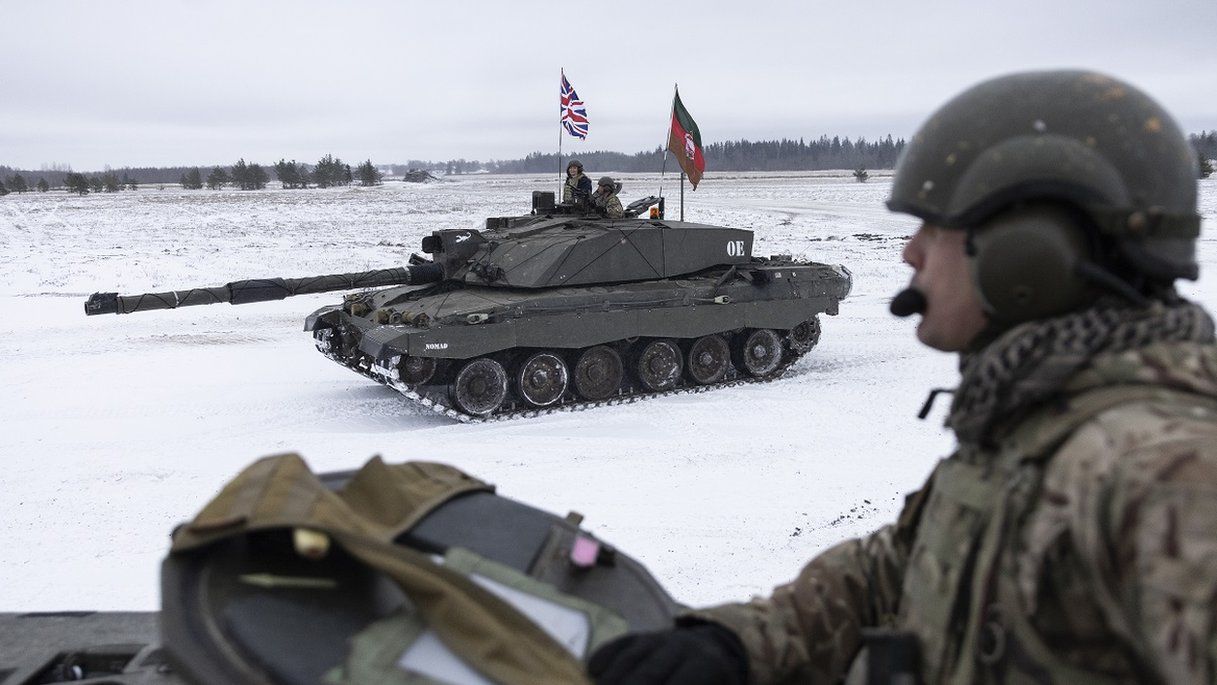 There is a "real threat" of Russia invading Ukraine, Foreign Secretary Liz Truss has warned, but it is "very unlikely" British soldiers would be deployed to fight in any conflict.

Instead, she said the UK was sending weapons to Ukraine and "strengthening" its sanction system so oligarchs close to the Kremlin had "nowhere to hide".

She said the UK was also offering extra support to nearby Nato allies.

Any invasion would be "terrible for Europe", Ms Truss told the BBC.

Russia has placed about 100,000 troops, tanks, artillery and missiles near Ukraine's border, but denies it plans to invade the former Soviet republic, which borders both Russia and the EU.

But Ms Truss said it was "highly likely" that President Vladimir Putin was looking to invade.

"We're doing all we can through deterrence and diplomacy to urge him to desist," she told BBC One's Sunday Morning programme.

Economic sanctions - punishments put on a state, individuals or organisations by another country - could target Russian financial institutions, energy companies, and those who are "key to... the continuation of the Russian regime".

Under new legislation, sanctions could potentially target "any interest that has an impact on the Russian government", she said.

The Foreign Office is expected to announce tougher sanctions in Parliament on Monday.

Earlier this week, Ukraine's President Volodymyr Zelensky called on the West not to create panic, saying warnings of an imminent invasion were putting Ukraine's economy at risk.

Ms Truss, who will visit Ukraine and Moscow in the next two weeks, said the UK had already trained 20,000 troops in Ukraine, supplied anti-tank missiles, and given support to its navy and energy sector.

The UK is also considering offering to double the number of its troops deployed in Eastern Europe, with Prime Minister Boris Johnson saying it would send a "clear message to the Kremlin".

The UK has more than 900 military personnel based in Estonia, more than 100 in Ukraine as part of a training mission, while a light cavalry squadron numbering about 150 is deployed to Poland.

Also speaking to Sunday Morning's Sophie Raworth, Nato's secretary general Jens Stoltenberg said there would be a "high price to pay" if Russia decided "to use force".

"The more aggressive they are, the more Nato [presence] they will get at the borders."

However, he reiterated that Ukraine was not a member of the military alliance, and as such there were "no plans to deploy Nato combat troops".

Russia wants the West to promise Ukraine will never join Nato, in which members promise to come to another's aid in the event of an armed attack.

Nato's 30 members include the US, UK, and several former Soviet republics, some of which border Russia. Moscow sees Nato troops in Eastern Europe as a direct threat to its security.

Mr Putin has long argued the US broke a guarantee it made in 1990 that Nato would not expand further east, though interpretations differ over exactly what was promised.

Last month, Russia issued a written list of its concerns about Nato expansion and reiterated that Ukraine should never join the alliance.

The US has since rejected that demand, but Secretary of State Antony Blinken said it was offering Moscow "a serious diplomatic path forward, should Russia choose it".

If Russia were to invade Ukraine, it would not be the first time.

Russia annexed Ukraine's southern Crimea peninsula in 2014. It is also backing rebels who seized large swathes of the eastern Donbas region soon afterwards, and some 14,000 people have died in fighting there.