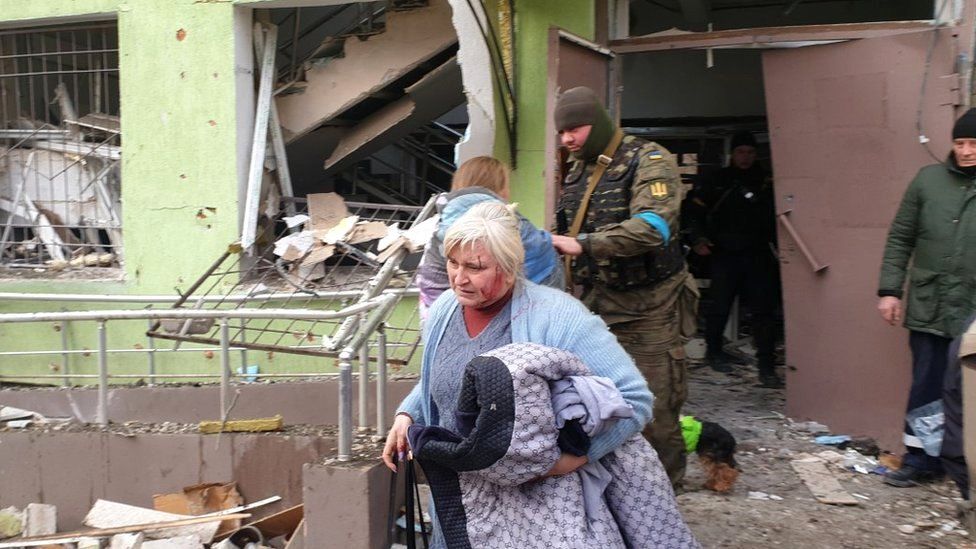 Mr Javid said there had been more than 25 attacks on health centres and hospitals since the invasion began.

"This is a war crime and Russia will pay for the crimes it's carrying out," he said.

Russia has claimed, without evidence, that hospital bombings were faked.

One attack on a maternity and children's hospital in Mariupol on Thursday which killed three people, including a child, was condemned by Prime Minister Boris Johnson as "depraved".

An intelligence briefing from the Ministry of Defence says several cities remain encircled by Russian forces and continue to suffer heavy shelling.

Most Russian ground forces are now 15 miles (25km) from the centre of Kyiv, the MoD said, while part of a large armoured column appears to be dispersing to try and surround the city.

Speaking on a visit to Birmingham Children's Hospital, Mr Javid said that "Russia needs to stop its aggression".

He said the World Health Organization had counted more than 25 health facilities which had been targeted or hit by Russian forces, describing it as "completely unacceptable".

Under the Geneva Conventions and other international agreements which attempt to regulate wars, civilians cannot be deliberately attacked, and neither can the infrastructure they depend on to survive.

The UK is among 39 countries which on 3 March referred Russia to the International Criminal Court, which prosecutes war crimes, following the bombardment of civilian areas in several cities.

Mr Javid said more medical aid, on top of the six plane-loads already sent, will go out in the coming days.

More than £400m of UK aid has been promised to Ukraine, including humanitarian aid and economic support.

The UK was also among the first to send weapons and other military aid, starting in January. 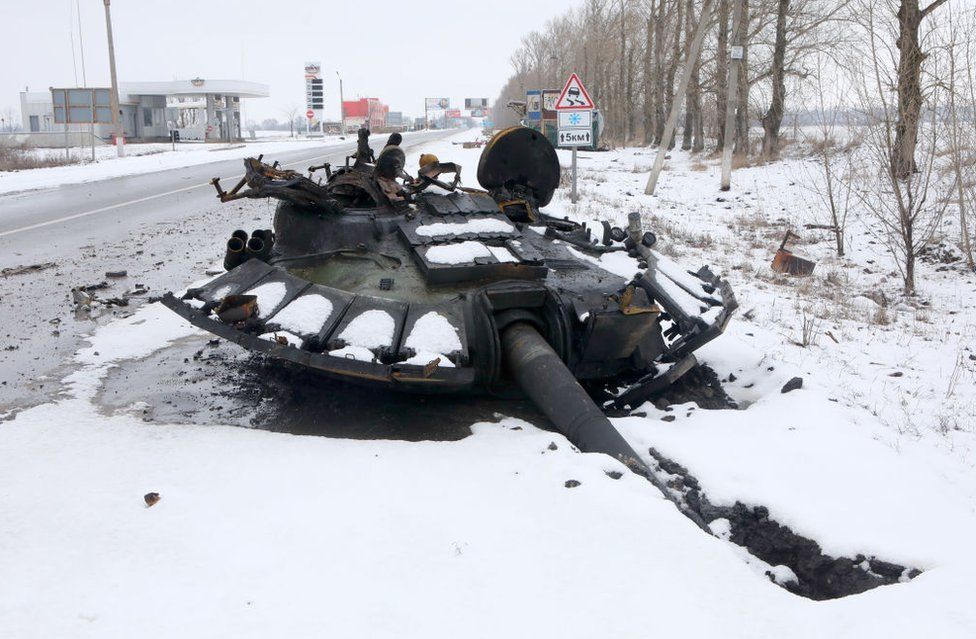 Anti-tank weapons supplied by the UK and other western nations have been used to destroy Russian tanks, such as this one near Kharkiv

Defence Secretary Ben Wallace said this week that the UK had delivered 3,615 light anti-tank missiles and promised to continue to deliver more.

He said the UK would also start delivering a "small consignment" of Javelin anti-tank missiles, which can target tanks up to 1.5 miles (2.5km) away, and is considering donating Starstreak portable anti-aircraft missiles.

But the UK has faced criticism over its response to the displacement of over 2.5 million Ukrainians, with only 1,000 refugees given visas via the Ukraine Family Scheme as of Friday. No updated figures were available on Saturday.

A new visa scheme allowing individuals and organisations to sponsor Ukrainians to come to the UK if they do not have family connections is expected to be announced on Monday.

Labour Leader Sir Keir Starmer said the country needed "a simple, safe, quick and efficient route to sanctuary" rather than the current approach, which is "too narrow, too slow, with too many hurdles in place".

Asked if he would be prepared to host a Ukrainian refugee in his home in north London, Sir Keir said the British public have shown "incredible support towards the Ukrainian people, whether that's giving money, whether it's giving things that they can provide or whether it's providing sanctuary - and like many, many other people, I'd be more than happy to play my part in that".

French President Emmanuel Macron said the UK's moves towards making its system more generous were "going in the right direction" and "maybe at some point they will totally match" the European Union approach of allowing refugees from the war a three-year residency without a visa.

Mr Macron said a letter from his interior minister accusing the UK of a "lack of humanity" had been "useful" and France would assess over the next few days whether enough was being done. He said France had offered to host visa application centres in Lille or other cities.