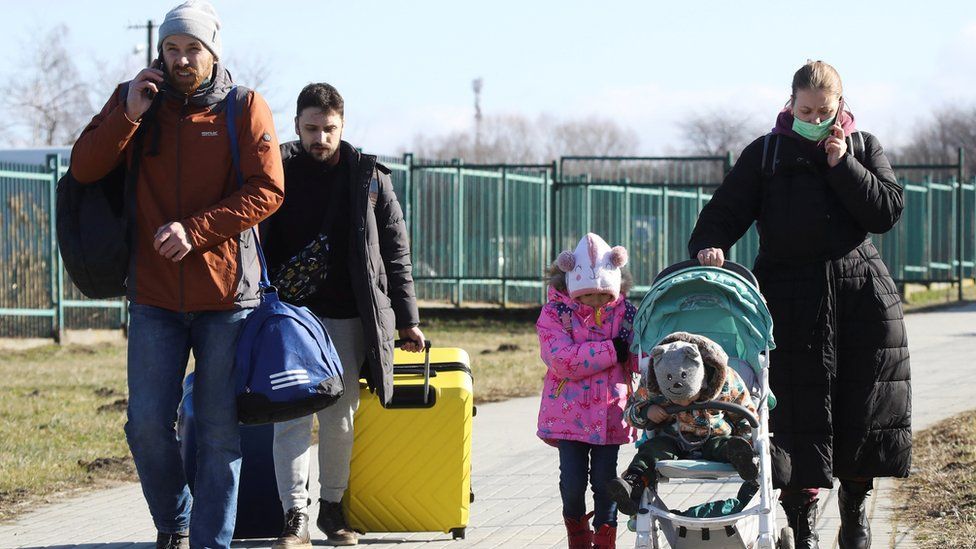 Charities have urged the UK to welcome thousands of refugees from Ukraine, matching the effort made after the 1990s conflict in the former Yugoslavia.

The UK should play a leading role in providing sanctuary, Save the Children and Amnesty International, among others, said in a letter to the Times.

The UN warned five million people could be displaced by Russia's invasion.

The Home Office said its priority was British nationals and their families.

But it said it would work with international partners on issues including migration as the situation develops.

As the Russian assault raged on with missile strikes, explosions and clashes between civilians and military fighters, thousands of Ukrainians were trying to flee the country.

But they faced heavy traffic jams and bus and train services were overwhelmed.

Air travel is no longer an option, as the Western airlines are completely avoiding the country's airspace, and Kyiv's international airport was reportedly one of the first targets of Russian strikes.

Some people walked on foot, wheeling their possessions in suitcases across the border into Poland and Hungary.

UN aid agencies said on Friday that fuel, cash and medical supplies are running low in parts of Ukraine, which could drive up to five million people to flee abroad.

At least 100,000 people have already fled their homes, while several thousand have crossed into neighbouring countries including Moldova, Romania and Poland, UN refugee agency spokesperson Shabia Mantoo told a briefing in Geneva.

Prime Minister Boris Johnson said the humanitarian impact of the conflict "threatens to be enormous", but added the UK needed to do everything it could to stabilise Ukraine's economy and support its government.

In their letter, the charities - which also include the International Rescue Committee UK, the Refugee Council, and dozens of other humanitarian groups - said the Ukraine attack could be "the most significant European conflict since the collapse of Yugoslavia".

"A generation ago, the UK saved the lives of thousands of families from the Balkans through an evacuation and resettlement programme," they said.

"The government should now respond with a well-resourced initiative working with councils across the country, to welcome Ukrainians who need sanctuary."

Cllr James Jamieson, chairman of the LGA, said councils were "deeply saddened by the tragic events unfolding in Ukraine" and were following the situation closely.

"As shown with the recent conflicts in Syria and Afghanistan, councils have a proud history of welcoming refugees, stepping forward voluntarily to offer homes and support to new arrivals and helping resettle them in local communities," he said.

Labour deputy leader Angela Rayner welcomed the prime minister's vow to help Ukrainian refugees saying: "They are in need, and we should be responding to that need."

Speaking in Newcastle, she said: "I'm incredibly proud of the Ukrainians and I'm proud of what our country is doing to support their freedom and their right to exist.

The Liberal Democrats foreign affairs spokesperson, Layla Moran, described the queues of people "desperate to get out before it is too late."

"We must not turn our backs on the people of Ukraine in their hour of need," she said. 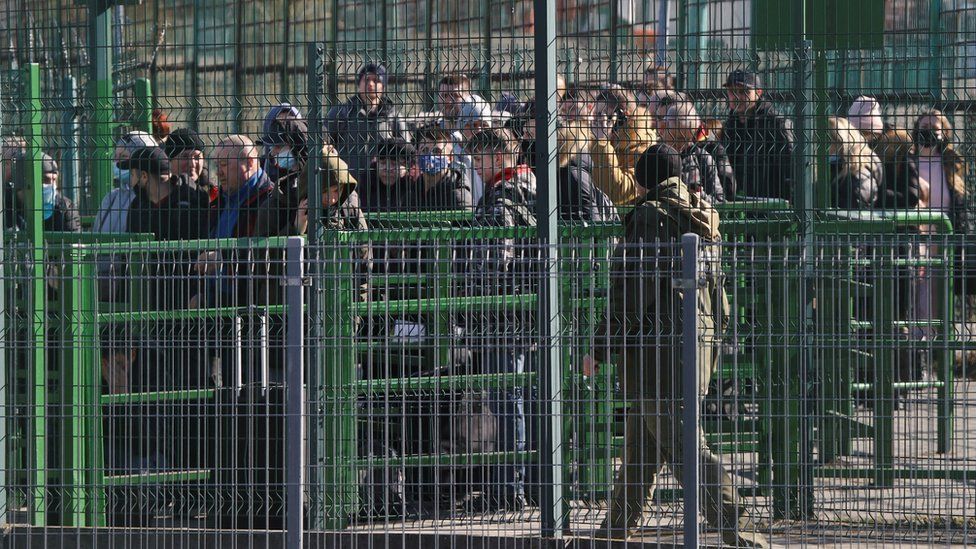 The charities also urged the government to rethink its Nationality and Borders Bill, which they said would make it harder for refugees like those from Ukraine to claim asylum in the UK.

The bill would make it a criminal offence to knowingly arrive in the UK illegally and introduce life sentences for those who facilitate illegal entry into the country, potentially penalising those seeking sanctuary.

Visa applications from Ukraine for people who are not related to British nationals are currently suspended, meaning there is no legal route for them to enter the UK and claim asylum.

A source told the BBC the government is "scenario planning" for an increase in asylum seekers from Ukraine.

The Home Office said on Thursday night it was allowing some Ukrainian nationals in the UK to extend their visas.

Those on visitor visas will be able to switch to apply for family visas or the points-based immigration system without leaving the country, potentially allowing them to get a job and stay in the UK for longer.

Ukrainians in the UK already on the point-based system will be able to stay longer and seasonal agricultural workers will have their visas automatically extended until the end of the year.