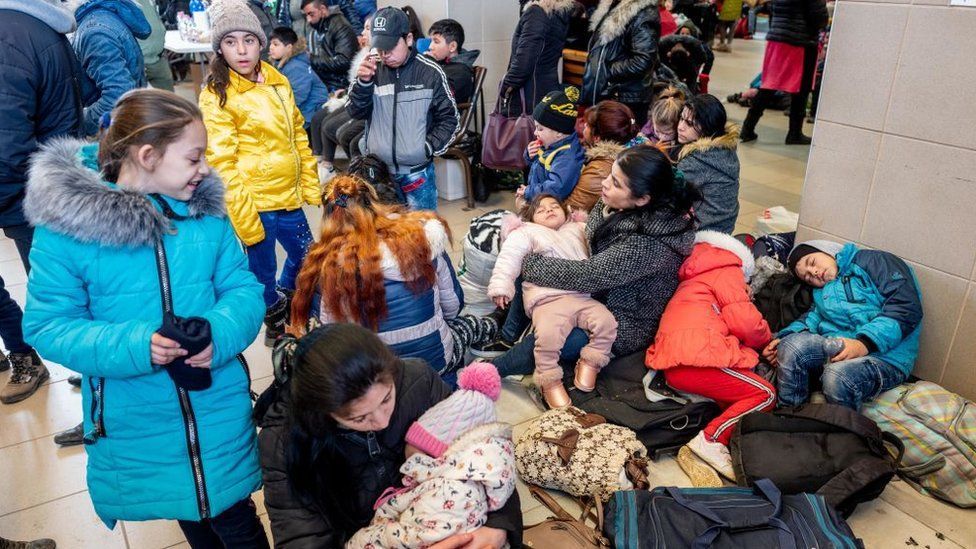 Scotland stands ready to offer "refuge and sanctuary" for Ukrainians fleeing from the Russian invasion, ministers have said.

The Scottish government said it would play its part if a resettlement programme to bring Ukraine nationals to the UK is launched.

Scotland's councils have also said they would "open our arms" to those in need.

Refugee agencies fear millions of Ukrainians could try to escape the country as Russia's war intensifies.

Meanwhile crowds gathered in Glasgow's George Square and at Holyrood in Edinburgh to protest about the Russian invasion.

There has been cross-party condemnation of the Russian military action at Holyrood and demonstrations have been held outside the Russian Consulate in Edinburgh.

Cabinet Secretary for External Affairs Angus Robertson has written to the Russian ambassador to the UK condemning Russia's invasion of Ukraine which he said has "no conceivable justification".

In the letter to Ambassador Kelin, Mr Robertson called for an immediate end to the conflict and demanded that all Russian troops withdraw from Ukraine immediately.

Asylum is reserved to the UK parliament and the Home Office has said its immediate priority was British nationals and their families caught up in the Ukrainian conflict.

But it said it would work with international partners on issues including migration as the situation develops. 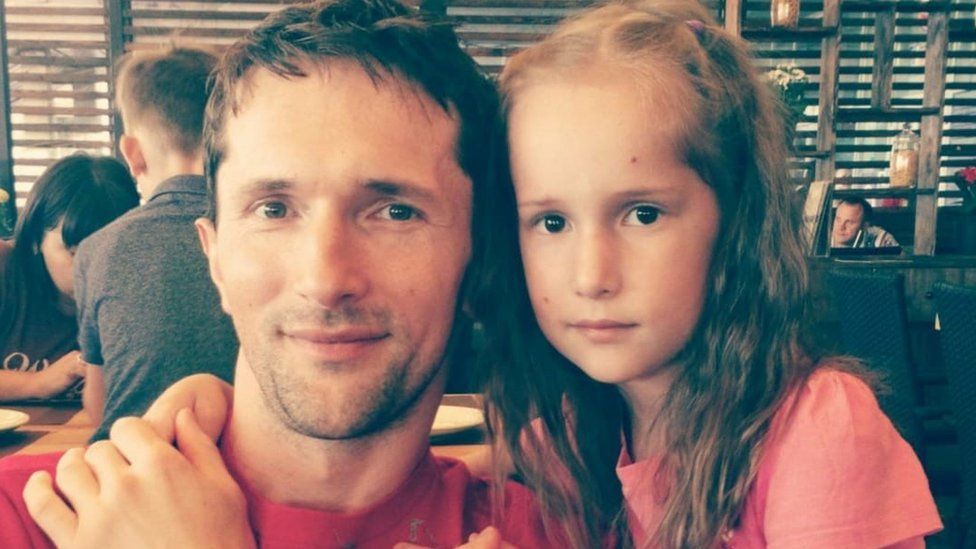 Alexei Achkason is trying to secure safe passage to Scotland for 10-year-old Alisa, who is in Ukraine.

When the Russian attack on Ukraine began early on Thursday morning, Alexei Achkasov received a text from his 10-year-old daughter, Alisa.

"Daddy, I'm really scared," she wrote. "I don't know what to do because we can hear explosions. What do I do?"

Alisa was at home in the Ukrainian city of Kharkiv, near the Russian border. Her father, a Ukrainian-British national, was in Carnoustie, Angus.

"Obviously when a 10-year-old is asking you such questions, well that's it, you can't sleep after that," he told BBC Scotland. 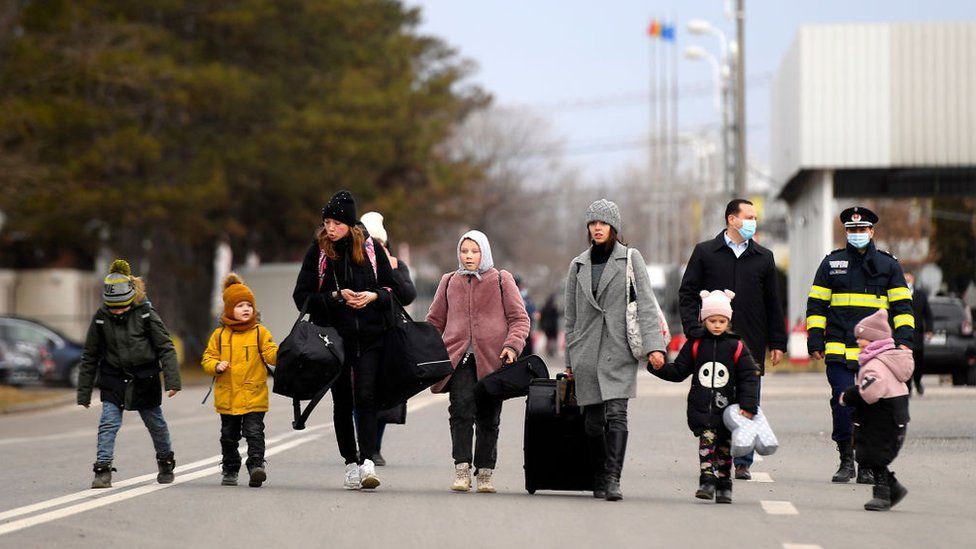 Charities have urged the UK to welcome thousands of refugees from Ukraine, matching the effort made after the 1990s conflict in the former Yugoslavia.

The UK should play a leading role in providing sanctuary, according to Save the Children and Amnesty International, among others.

'Ready to open our arms'

A Scottish government spokeswoman said the UK government has not made it aware of any plans for Ukraine-specific refugee resettlement.

She added: "Scotland stands ready to offer refuge and sanctuary.

"If a resettlement programme is announced, or Ukraine nationals are accepted as part of existing programmes, the Scottish government will work to support our local authorities and services to enable them to offer places and support refugees arriving."

Alison Evison, president of the local government umbrella body Cosla, has written to Russia's UK ambassador to condemn the invasion.

She said: "The inevitable suffering being, and yet to be, caused to local communities across Ukraine by the Russian military invasion cannot be ignored.

"We in Scottish local government stand ready to open our arms to those in Ukraine and help them in whatever way we can." 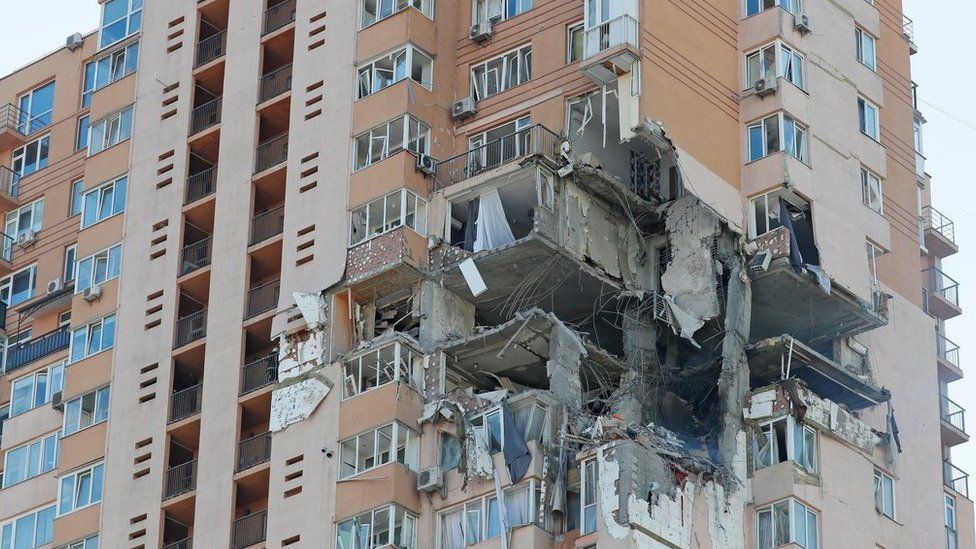 Among those protesting in Glasgow was Yevegn Chub, a Ukrainian citizen who has been living in Glasgow for seven years, and has family and friends who live near Kyiv.

He said: "It is a horror, I am constantly trying to connect with my family and friends to try and catch up with the news.

"I have not slept well at all.

"So far so good, they have electricity, mobile connection and they have food. But they should have started the sanctions months ago - now the sanctions are nothing for Putin." 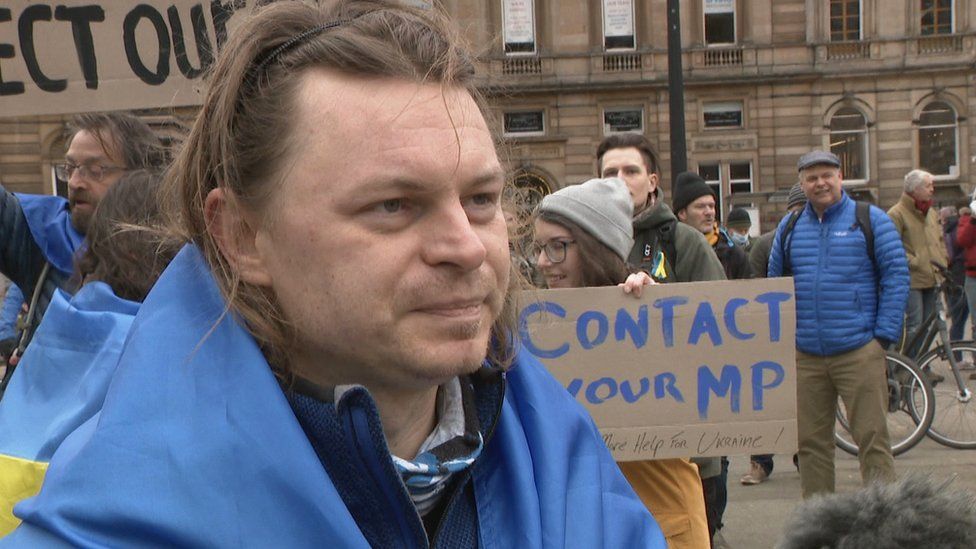 Mark McGuinness, who has lived and worked in Ukraine, was also at the protest and described the country as having a "very passionate and intelligent" society.

He said: "I think it's an absolute tragedy what is unfolding there.

"It's surreal, I'm old enough to remember the Gulf War and The Falkland's War, I never thought I would see an atrocity like this

"It is not just Ukrainians, it is Russians losing their lives too. I think we can do more but we have definitely missed the boat." 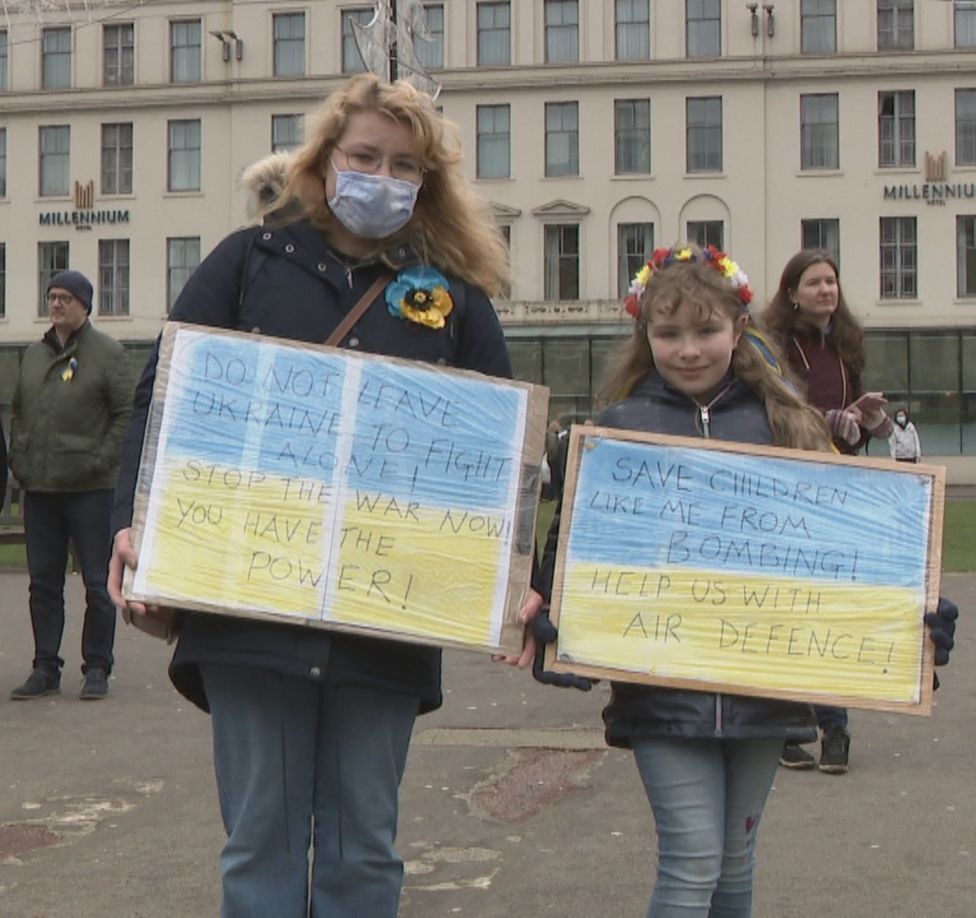 A megaphone was passed around demonstrators, with some sharing personal stories about relatives currently hiding in basements in Kyiv.

Marjan Pokhyly, originally from Kyiv and now living in Edinburgh, told the PA news agency he was worried about his grandmother in Ukraine.

He said: "On her house there was a mark for artillery strike.

"I don't know if the mark has been rubbed off, but there were people dressed in regular clothes and they were walking around marking for artillery to strike."

'Hiding in the basement'

Vlada Kren, who is from Ukraine but now lives in Edinburgh, said her friends and relatives of her husband, Vasyl Kren, who is a Ukrainian priest in the Leith area of the city, are still in parts of the country that are being heavily targeted.