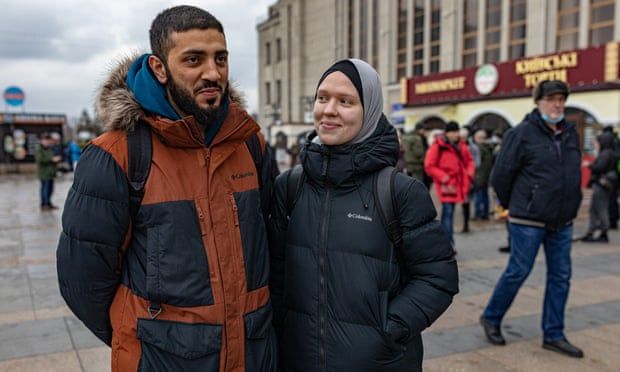 Visa red tape sent Fozan Dar and Ukrainian wife Iryna on fruitless 12-hour round-journey to Kyiv just as Russian bombs began to fall
A British man and his Ukrainian wife spent 12 hours shuttling between cities targeted by Russian bombs on Thursday in a desperate but failed bid to complete her biometric registration for a UK spousal visa.

Fozan and Iryna Dar left the central city of Dnipro, where they live, on a midnight train on Wednesday, in a last-ditch attempt to reach the processing centre in Kyiv. Soon after, the city’s airport closed and bombing began, there and in other cities.

Their train shuddered to a halt in a distant suburb of the Ukrainian capital as the city was hit by Russian airstrikes. Eventually, the couple decided to get off the train there, pay more for a taxi than they had for the train tickets, and head to the biometric registration centre.

When they got there, a handwritten sign on the door said: “Today we aren’t working, sorry for the inconvenience.” They called the embassy, who first said the centre was open, then said there was nothing they could do, as the collection of biometric data had been contracted out.

Iryna had originally applied for a UK visitor’s visa two days before the British embassy advised citizens to leave Ukraine, hoping to meet her husband’s extended family after Covid restrictions forced them to have a small wedding.

Because the embassy held her passport, the couple could not leave. Fozan studies medicine at a university that has already evacuated many of its international students, but he refused to go without his wife. “There is no way in hell I’m leaving her behind, it’s not up for debate. I have to protect her,” he said.

As the situation in Ukraine got more serious, the couple decided to switch their application and ask for a spousal visa.

Visitor visas cannot be used for more than six months. As warnings of invasion came, they feared it might not be possible to return to Dnipro for longer than that, and Iryna didn’t want to be in the UK on a restricted visa for an unknown period of time.

But the embassy kept her passport and told her that the biometric details collected for her visitor visa could not be used for her latest application, she said. After 10 days of increasingly desperate calls to a consular helpline, her passport was returned on Tuesday and they told to redo her biometric registration in Kyiv.

So they bought train tickets that would get them to the Ukrainian capital the first possible day: Thursday morning. “We were woken up on the train at 5am by friends calling, who said they were in hiding in the basement, and the shelling went on for over an hour,” Fozan said.

Despite those attacks, and fear of more violence, the couple have decided to return to Dnipro again, because it’s their home, they have family there, and they hope the university where Fozan studies might include them in any further evacuation.

As they waited for their train, the couple spent several hours as a kind of unofficial advice bureau to other foreigners milling around the station in desperation after tickets sold out.

“People noticed we were speaking English to each other, and I looked Ukrainian, so they asked us for help with things like reading the timetable,” she said.

The people they helped included Germans and Pakistanis and a man from Manchester who got trapped when his overnight layover coincided with Russia’s invasion, and his flight out of Kyiv was cancelled.
#Covid

Fozan Bear 212 days ago
In my class there were five boys called Fozan which used to confuse the teacher ... Such a British name
View all comments (1)Add comment