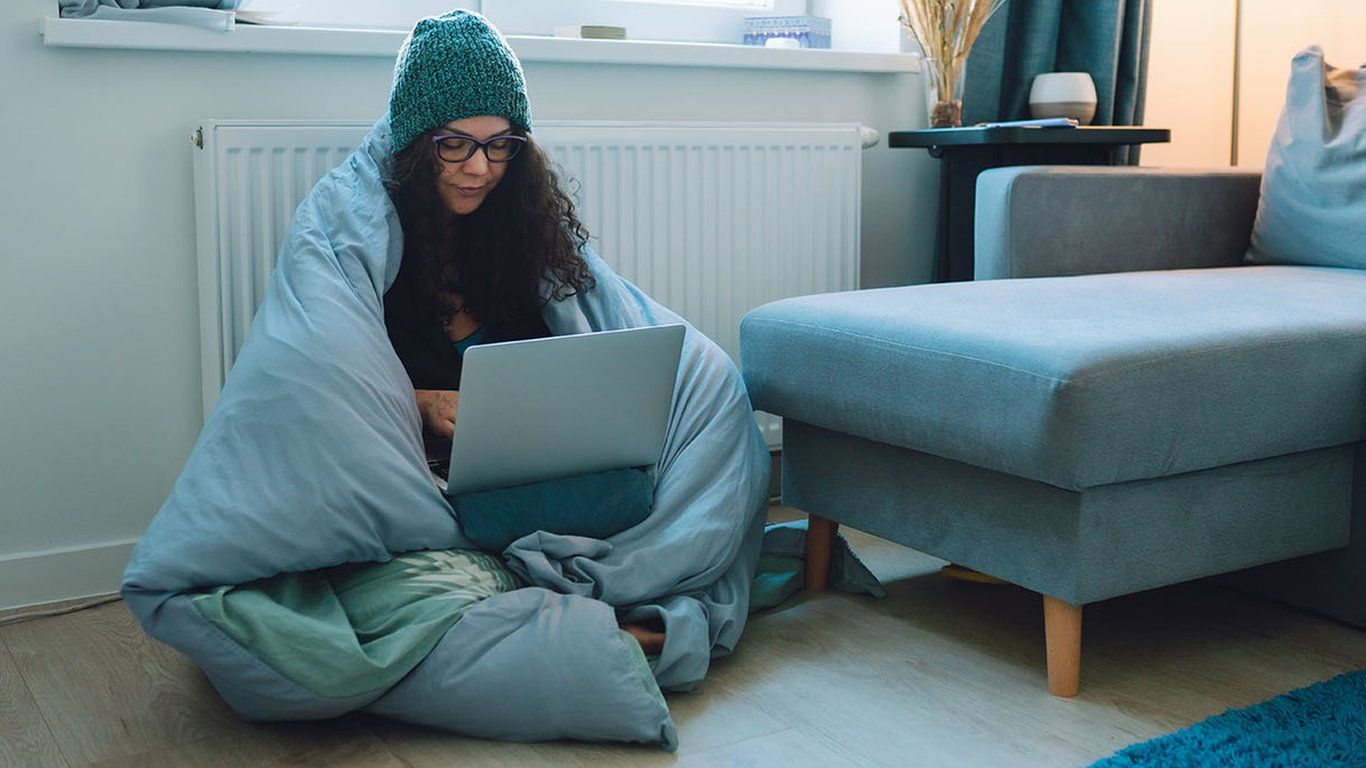 UK weather: How long will the cold snap last?

Severe cold weather is expected across the UK with snow and ice warnings in place in Scotland, Wales, Northern Ireland and the east coast of England.

Forecasters think we're likely to be experiencing icy temperatures until at least early next week and maybe beyond that, but what's causing the cold snap and should we be surprised? 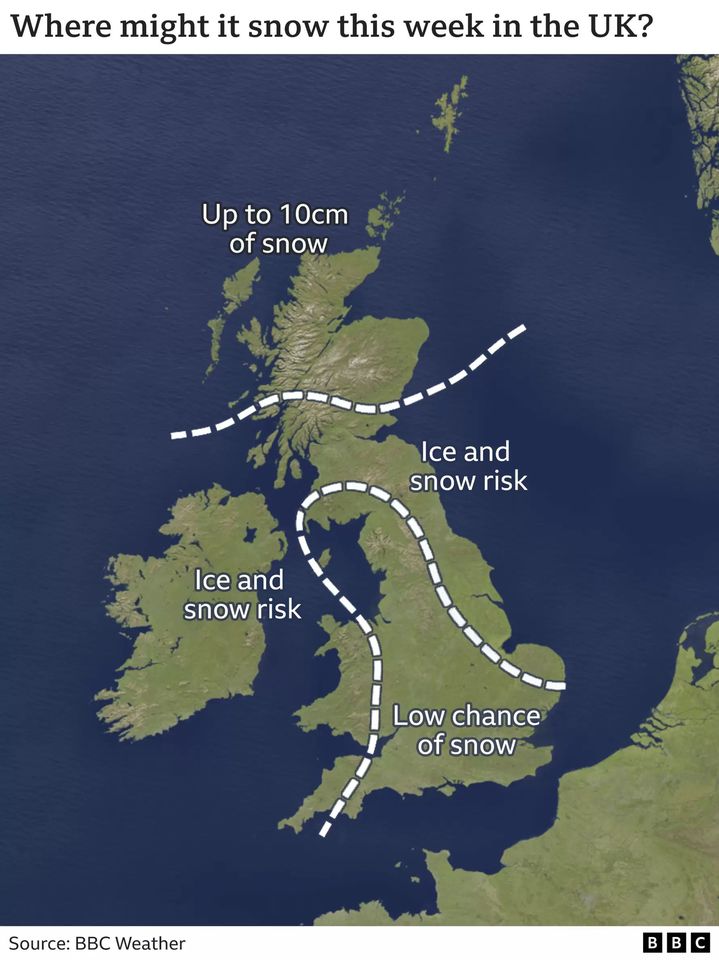 Is it colder than usual for December?

Temperatures in the UK have been about average for December so far - with daytime highs between 8C (46F) in southern England and 5C (41F) in Scotland - but they are about to get colder. By Thursday and Friday some places in the north will struggle to rise above 0C during the day. 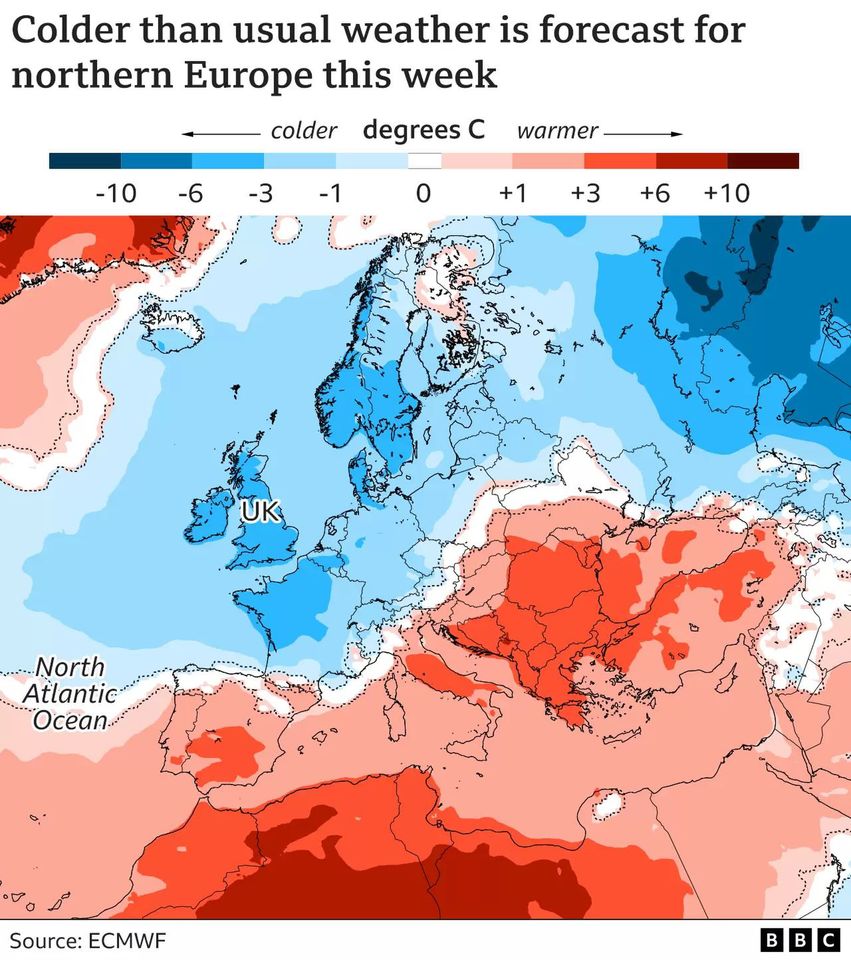 What is causing the cold snap?

There has been a large area of high pressure over Russia for some time and a second high pressure system has built up across Greenland and Iceland. 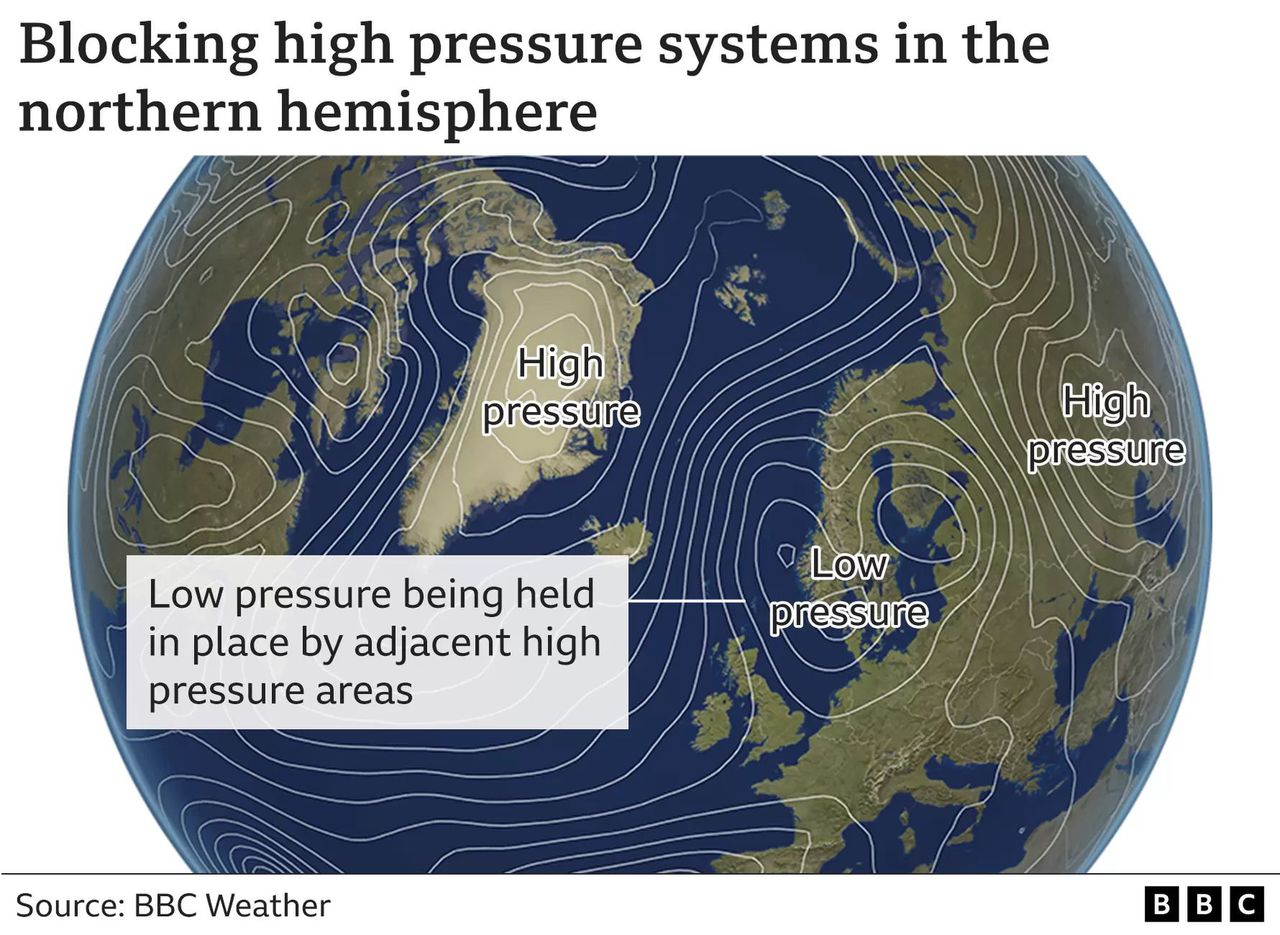 The second is moving slightly further west, forcing cold Arctic air to flow south between the high and low pressure systems and over the UK - a so-called Arctic blast. 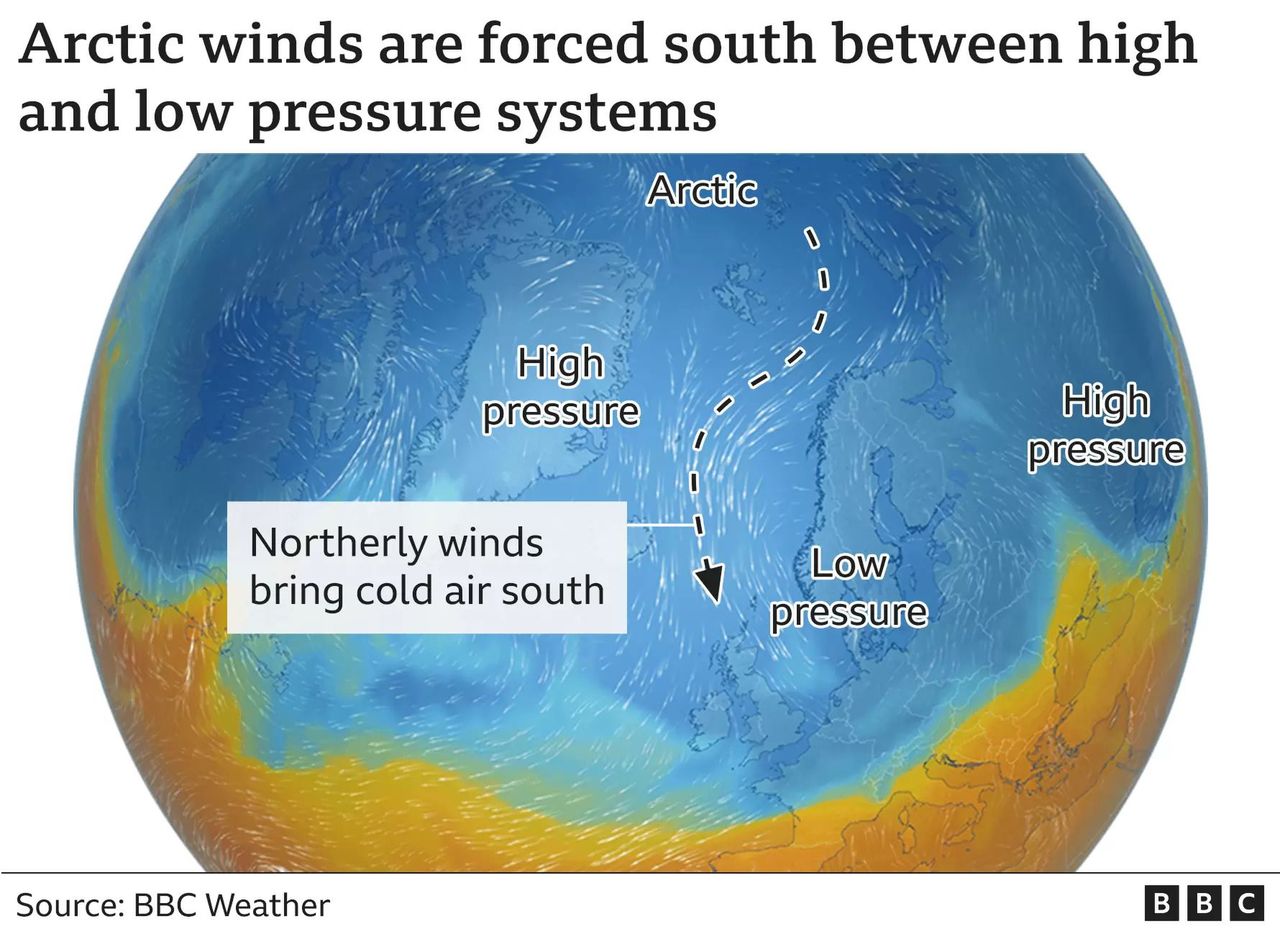 That flow of cold air is then reinforcing the highs, resulting in what is known as a "blocked pattern" with the high pressure areas remaining in place for several days.

BBC Weather presenter Matt Taylor says there are some low pressure systems in the Atlantic which will probably push into western Europe and could eventually break down the blocked cold weather pattern.

Why does it feel even colder?

The cold weather comes as a particular shock because we've had a very warm autumn - the third warmest on record for the UK.

Met Office data shows just how much warmer than usual September, October and November have been, with mean highest daily temperatures in some places 2.5C above the average between 1990 and 2020. 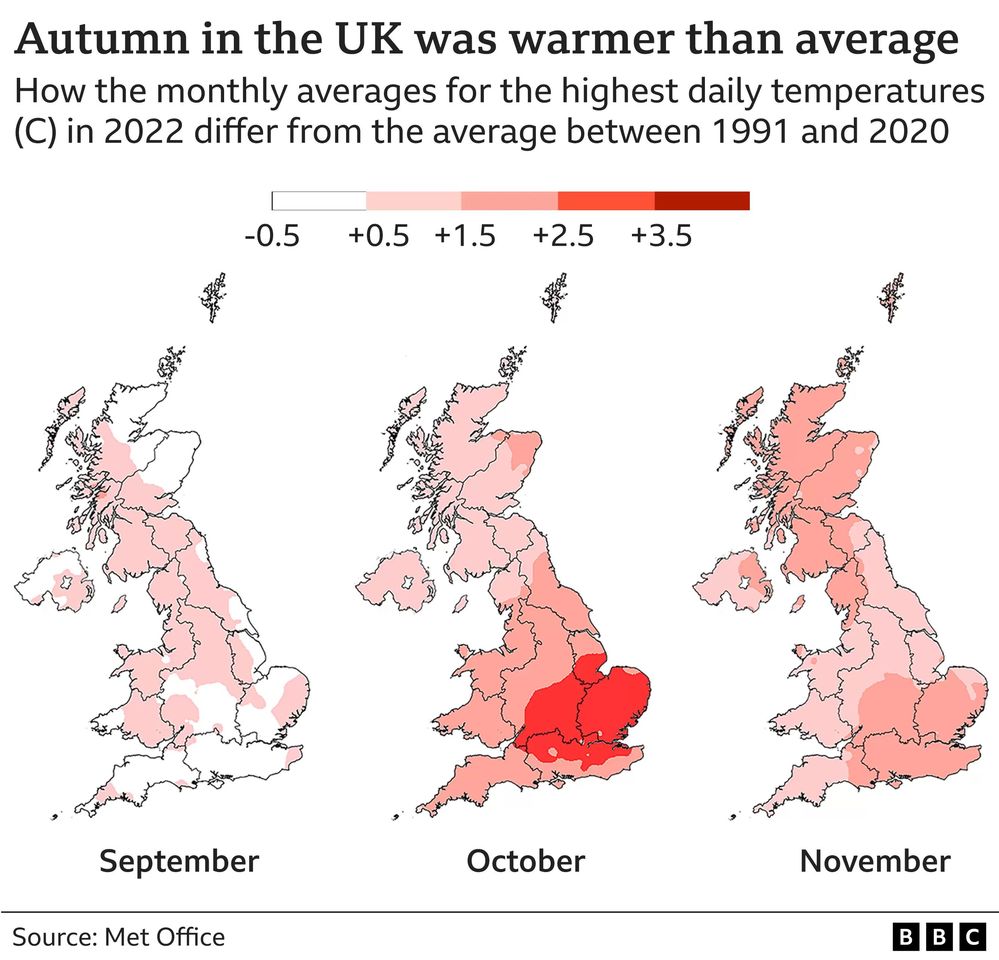 It's also been a while since we've had a really cold December in the UK.

December 2010 was the coldest on record for the UK based on mean temperatures - and also very snowy. The first half of December 2012 was also well below average but much milder weather in the second half of the month meant it ended up about average overall.

Since then, December cold spells have been short and infrequent.

How low will temperatures fall?

Temperatures are expected to fall dramatically overnight with lows of -5C in Edinburgh, and -3C in Cardiff and London. Belfast may not fall below 1C but Birmingham and Newcastle are both forecast to drop to -4C.

And although temperatures for many will be back above freezing on Thursday, forecasters warn the northerly wind means it will feel much colder.

Does it mean there will be snow at Christmas?

There are not many indications that this cold spell will remain in place until Christmas and temperatures are expected to return to average in the week leading up to Christmas Day, BBC Weather's Nikki Berry says.

But she adds that forecasters aren't confident of this and, even with average temperatures, snow could still fall at times on high ground.

Traditionally the Met Office defined a white Christmas as one snowflake being observed falling in the 24 hours of 25 December at the Met Office building in London.

However, with the rise in betting on where there could be a white Christmas it increased the number of locations observed and they now include sites such as Buckingham Palace, Edinburgh Castle, Coronation Street in Manchester and the Millennium Stadium in Cardiff.

For Oddschecker, the odds on a white Christmas is determined by whether there is snowfall recorded in each city's respective airport. 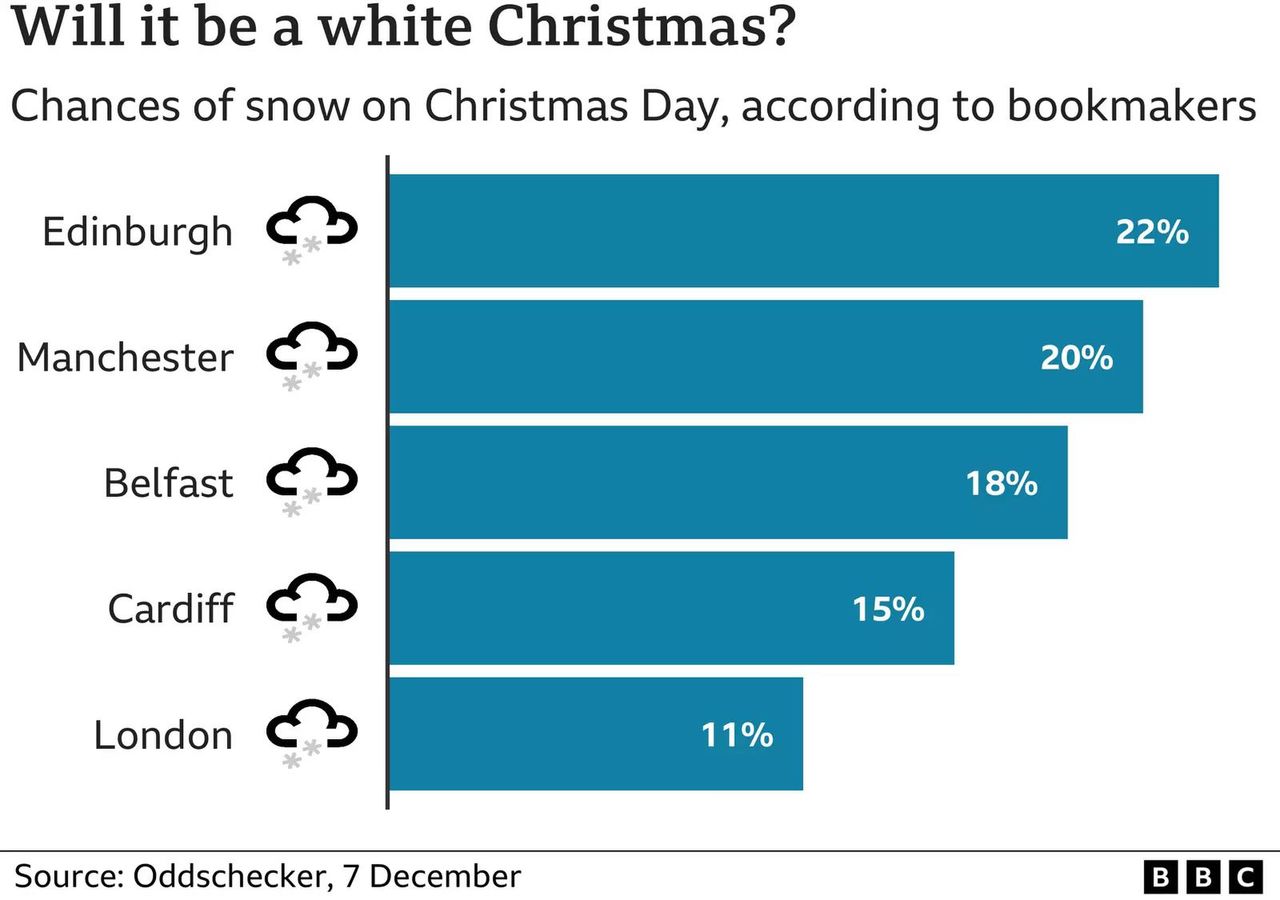