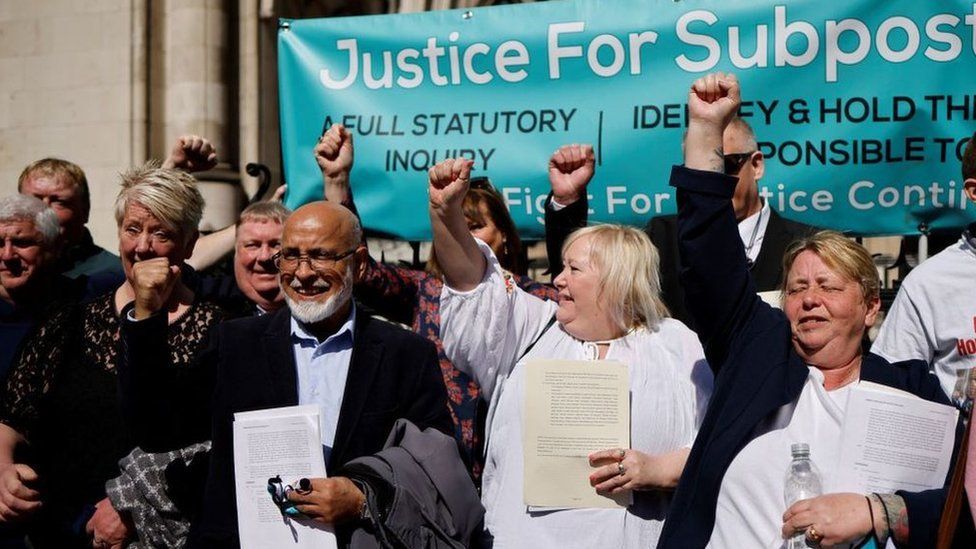 Subpostmasters who helped uncover the Post Office IT scandal but missed out on full compensation are to get payouts under a new government scheme.

The 555 workers won a landmark civil case against the Post Office in 2019, but saw most of their settlements swallowed up by legal fees.

They will now get the same level of compensation as other subpostmasters who were wrongly convicted.

The announcement comes as a public inquiry into the scandal continues.

Between 2000 and 2014, hundreds of subpostmasters and mistresses were wrongly accused of theft, fraud and false accounting due to faults in the Horizon computer software being used at branches across the UK.

In 2019, a group of 555 subpostmasters and mistresses successfully challenged the Post Office over the accusations in the High Court.

That case set a legal precedent and paved the way for a series of cases in which 72 people had criminal convictions overturned.

The Post Office opened a historic shortfall scheme to compensate more than 700 wrongfully convicted former branch managers who had personally covered shortfalls in branch accounts caused by the Horizon software.

But the 555 people who won the High Court case could not participate in the scheme, and despite winning nearly £43m in compensation in 2019, the group's funds were swallowed up due to a "no win, no fee" agreement with Therium, the company which funded the litigation.

The group only got a "small fraction" of the settlement equating to around £20,000 each, the Treasury said.

Therium has agreed to waive its rights to any claim on the new pot of compensation.

Business minister Paul Scully told the BBC's Today programme that the compensation paid to the 555 people would be "absolutely parallel" to the other Post Office workers who had been compensated through the historic shortfall scheme.

He said the group were "pioneers" and had "broken open" the scandal.

"I want to make sure they get that full compensation," he said. "It is a massive scandal and it's something I am absolutely determined to put right."

Asked if the families of 32 out of the 555 people who have since died would be able to receive the compensation, Mr Scully said he would look into it.

Speaking in the House of Commons on Thursday, Mr Scully said he envisaged the compensation scheme as running alongside the historic shortfall scheme "on the basis of losses, and looking at ongoing losses as well".

"I'd love to say I've got a blank cheque from the Treasury, but that's clearly not going to happen from this place - but the Treasury know that we need to sort it out.

"I want to make sure that the scheme has the confidence of [subpostmasters]," he added.

Following the government's announcement, the Post Office said it welcomed the move.

"Since it came to light through media reports that around £46m of the compensation provided to group litigation claimants was directed to the funders of their case, we have continually urged the government to address this unfairness," a statement said.

It's hard to overstate the importance of the legal precedent set by the victory of 555 subpostmasters two and a half years ago. That was the moment that evidence came into the public domain about the flaws with the Post Office's Horizon system, and back-end access to the software.

The judge did not hold back in his opinion of the Post Office, saying the system was not remotely robust, but that getting that information out of the Post Office had taken subpostmasters years, and many tens of millions of pounds in costs.

It was the moment where the tables turned against a crown institution which had been wrongly convicting, bankrupting, and sacking its own employees for decades.

Their David v. Goliath legal battle has proved the ammunition needed for 706 branch managers who were convicted or sent to prison have been able to get those convictions quashed. It also forced the Post Office to agree to refund 2,500 others for huge financial losses they suffered as result, although most still haven't received a penny of that money.

The 555 original legal trailblazers stood and cheered as their legal victory snowballed, but were left with very little in compensation themselves. This new scheme is promising to set that right. Full details of how to claim have not yet been published, and there's still a lot of nervousness from those who had to fight the Post Office and the government at every turn, but this is the clearest statement yet that a fairer payment is on the way.

The new compensation scheme comes as High Court judge Sir Wyn Williams leads a public inquiry into the Post Office scandal, which has heard testimonies from Post Office staff, some of which were wrongly accused or convicted of crimes they didn't commit.

A total of 72 have had their names cleared so far.

The inquiry - which is expected to run for the rest of this year - is examining whether the Post Office knew about faults in the IT system, Horizon, which was developed by Japanese company Fujitsu.

It will also ask how and why they were left to shoulder the blame.

The Post Office has previously said it is "sincerely sorry for the impact of the Horizon scandal on the lives of victims and their families and we are in no doubt about the human cost".

"In addressing the past, our first priority is that full, fair and final compensation is provided and we are making good progress," it added.

The Department for Business has previously said it is "eager to see all Horizon-related issues resolved fairly and quickly, including for the 555, who played a crucial role in bringing this scandal to light".

Watch: Tracy Felstead was sent to Holloway Prison for a crime she didn't commit
Add Comment