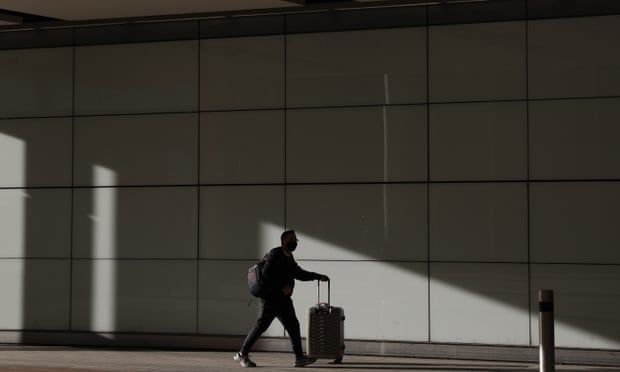 While the government expected the hotels’ costs would be covered by the occupants, it has emerged that the taxpayer has been left responsible for more than half of the £757m bill. The rooms were for those travelling to the UK from high-risk “red list” countries during the pandemic.

The Department of Health and Social Care, which issued a £385m contract to Corporate Travel Management to run the hotels, told the NAO that about £74m of bills covering rooms and Covid tests have not been paid. Another £18m has been fraudulently reclaimed in credit card chargebacks, but only two cases have been investigated or challenged.

The losses were revealed in a NAO report on how the UK managed cross-border travel during the pandemic. The report found that travel rules and border policy were incoherent, confusing and costly, and the government had no way of evaluating if they were worth it.

Among other policies reviewed by the NAO were passenger locator forms, introduced in June 2020, for inbound travellers to state where they would be staying and isolating. The report found that since September 2021, less than 1% of the forms were checked by border force officials. The information given was entirely down to self-declaration, while “checks by private-sector carriers focused on the existence rather than the accuracy of data”.

The UK Health Security Agency, which had a £114m contract for home visits to check if travellers were self-isolating, could not confirm whether 33% of those required to isolate actually did so.

The NAO also criticised the government’s attempts to create a market for Covid-19 testing. It said the DHSC had “limited oversight of the market it created, and service to the public has sometimes been poor”. In February at least 369 private firms offering PCR tests were listed on the government website, with stated prices ranging from £15 to £525. The NAO said the firms “often marketed themselves as being government approved”, but the government listing gave “minimal assurance that they can provide the services”.

Between February 2021 and January 2022, the rules for the border were changed at least 10 times. The report said that “poor communication of some measures created uncertainty”, with “minimal notice” causing operational problems for carriers.

The NAO found that the government “did not adopt good practice” or have any holistic assessment of the risks of its system, “nor ever stated how its competing objectives of managing Covid risks and reopening travel should be balanced and prioritised”.

While departments monitored their own spending on cross-border travel measures, there was no central government tracking of the total, despite costs of at least £486m.

The NAO added: “As it has not developed a set of performance measures to track the effectiveness of the measures it has deployed, and with no evaluation of the additional costs incurred, government cannot demonstrate its implementation measures have achieved value for money.”

Meg Hillier MP, chair of the public accounts committee, said policy had been “more reactive than proactive, and led to a confusing mishmash of different parts and programmes”.

She added: “There was little evidence of a guiding mind behind its approach and poor communication meant the public were often bewildered by the travel advice.

“Monitoring those entering the country relied on goodwill, rather than good data. Government never really got a handle on the numbers, nor whether its border measures were working effectively.

“Over two years since the pandemic began, government has still not got its house in order. With cases still high and removal of travel restrictions, government cannot afford to be complacent,” said Hillier.

Leisure travel was initially banned in March 2020, followed by a system of travel corridors opened in summer 2020 that was replaced by a “traffic light system” in May 2021, with various levels of testing and isolation required.

Gareth Davies, the head of the NAO, said the government had had to make changes at short notice during the pandemic but now had “an opportunity to ensure that it develops a systematic approach to managing any future travel measures, applying the learning from Covid-19”.

A UK government spokesperson said: “The pandemic was an unprecedented challenge and we acted swiftly and decisively to implement policies designed to save lives and protect the NHS from being overwhelmed.

“As the report notes, considerable efforts were made across government to put border measures in place that helped to protect the UK from arriving cases of Covid-19. These measures bought vital time for our domestic response to new and concerning variants, contributing to the national effort to contain and manage the virus.”
#COVID-19  #Covid
Add Comment