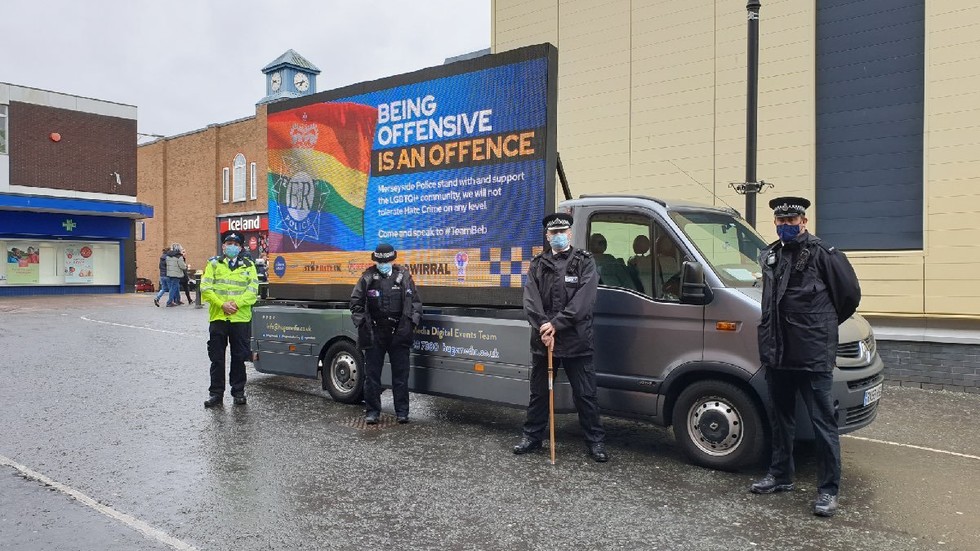 Liverpool’s Merseyside Police in the UK have apologised after stirring up controversy with a campaign that ominously warned Brits they could be charged with “being offensive.”

Superintendent Martin Earl apologised in a statement on Monday for “any confusion” the campaign caused, declaring: “We would like to clarify that ‘being offensive’ is not in itself an offense.”

Earl explained that the campaign was organized by local police in the Wirral area of Merseyside “to encourage people to report hate crime,” but added that the message was “incorrect,” despite calling it “well intentioned.”

Merseyside Police in Wirral became the target of international condemnation and concern after it posted pictures last week of its police officers standing by a rainbow flag billboard that read, “Being offensive is an offense: Merseyside Police stand with and support the LGBTQI+ community, we will not tolerate hate crime on any level.”

#TeamBeb are @JunctionONE_RP with @MsOHara71 as part of our on-going work to raise awareness around hate crime in #LGBTHM21.If you are here essential shopping, and wish to find out more about hate crime then please come and say hello to #TeamBeb. #OpTarget@MerseysidePCC 👍 pic.twitter.com/Ppqy96tDgE