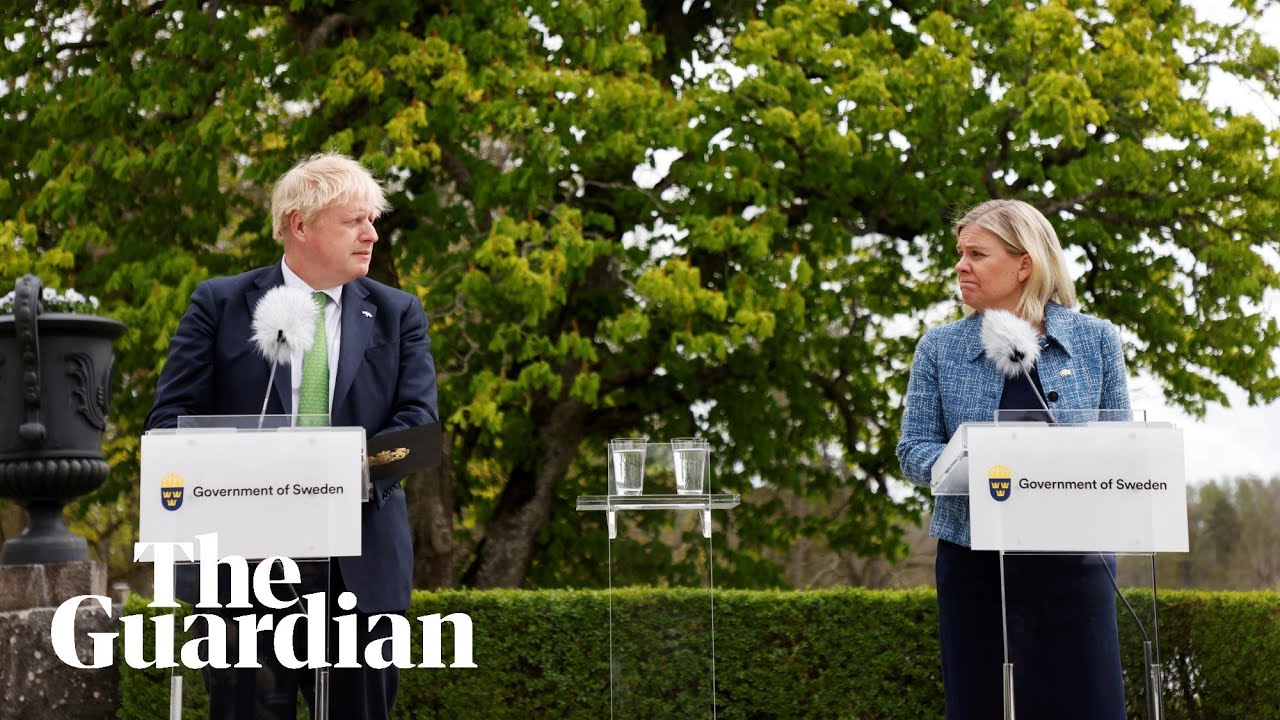 UK pledges to back Sweden and Finland against Russian threats

Boris Johnson has promised to support Sweden and Finland against potential Russian threats in any way necessary as he travelled to both countries to sign mutual security agreements, with their governments mulling Nato membership in the wake of the Ukraine invasion.

Holding a press conference with the Swedish prime minister, Magdalena Andersson, on his first stop on a daylong trip, Johnson said the type and extent of possible support would largely be governed by what Sweden might ask for.

Johnson had earlier signed mutual security agreements with Andersson. Later on Wednesday he signed a parallel deal with the Finnish president, Sauli Niinistö.

The mutual agreements promise that if either country faced an attack or a disaster, they would “upon request from the affected country assist each other in a variety of ways, which may include military means”.

At his press conference with Niinistö at the presidential palace in Helsinki, Johnson confirmed in response to a question that this could involve UK troops in Finland or Sweden: “Yes, we will come to each other’s assistance, including with military assistance.”

While the wording is general, the impetus comes from the Russian invasion of Ukraine, the subsequent decisions of Sweden and Finland to consider applying for Nato membership, and Russia’s threats of consequences if this happens.

Asked at the Helsinki press conference about a potential hostile response from Russia if Finland opted to apply to join Nato, Niinistö said: “If that would be the case then my response would be: you caused this. Look in the mirror.”

Speaking earlier alongside Andersson in Harpsund, the Swedish prime ministerial country retreat, Johnson said: “The war in Ukraine is forcing us all to make difficult decisions. But sovereign nations must be free to make those decisions without fear or influence or threat of retaliation.”

Questioned about what the UK-Sweden agreement might mean in practical terms, Johnson remained largely vague, but did not completely demur when asked if it could go as far as the UK providing assistance with nuclear weapons.

“This is about our joint decision to show that we will support and defend each other,” he said. “When it comes to our nuclear deterrent, that’s something we don’t generally comment upon, but what I’ve made clear is that it’s up to either party to make a request, and we take it very seriously.”

Johnson, who dodged questions on UK plans to potentially try to escape the post-Brexit Northern Ireland protocol, and his views on the Labour leader Keir Starmer’s pledge to resign if fined for breaching lockdown rules, said the deal was “the foundation stone” for closer links.

“This declaration is something that is about the UK and Sweden standing together, affirming our friendship and our partnership, and our willingness to come to each other’s defence and support,” he said.

Asked about Sweden’s decision over whether to apply to join Nato, Johnson said the UK would be supportive. “That’s not for me to comment upon except, of course, to say that I’m sure the UK will support whatever course of action Sweden decides to embark upon.”