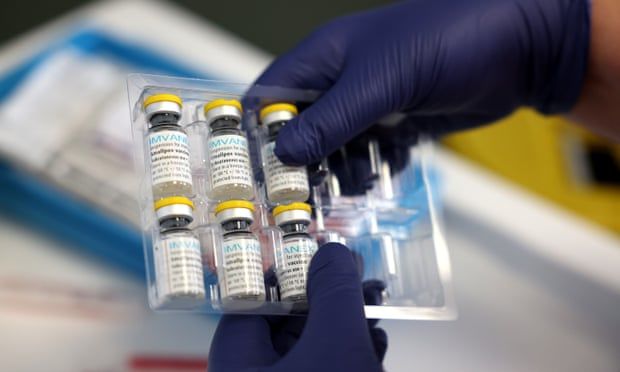 Terrence Higgins Trust says action must be stepped up to prevent disease becoming endemic
Health authorities are underestimating the scale of the response required to stop monkeypox becoming endemic in the UK, sexual health campaigners have warned, as a new vaccination drive is launched.

The Terrence Higgins Trust urged the NHS and the UK Health Security Agency (UKHSA) to urgently pump cash into the system to pay more healthcare workers to administer vaccines. It also wants the number of doses ordered to be doubled to protect against a virus that has infected at least 2,208 people in the UK, according to the latest official figures.

Monkeypox is usually mild and is spread by close contact with an infected person or animal, but the risk of severe disease is higher in children, pregnant women and people who are immunosuppressed.

The British Association for Sexual Health and HIV has estimated that at least 125,000 people will need vaccines, including gay men living with HIV, sex workers, and staff in sexual health clinics and saunas. A double dose of the smallpox vaccine is needed. Last week the NHS announced that it had procured at least 100,000 more doses. It is asking people to wait until asked to come forward for a vaccine, and is prioritising gay and bisexual men, and men who have sex with men who exhibit high-risk behaviour. Campaigners want more walk-in clinics amid “impatience” among people at risk.

“There needs to be a [monkeypox] tsar charged with stopping this becoming endemic,” said Richard Angell, the campaigns director at the Terrence Higgins Trust. “We can’t accept that it gets into the system like chlamydia.”

In a letter to the health secretary, Steve Barclay, on Saturday, Labour’s shadow health secretary, Wes Streeting, said: “I am concerned you are not acting with the urgency required, and that the response so far has lacked coordination from DHSC and NHS England,” he said.

“Your department has committed to achieve an 80% reduction in new HIV infections in England by 2025,” Streeting said. “It would be a scandal if progress towards achieving this were to be put in jeopardy.”

A government spokesperson said the UKHSA was monitoring vaccine demand and would be able to quickly procure more doses as required.
Advertisement

“The NHS is already contacting those eligible for the vaccine and are urging people to take up the offer as soon as they’re contacted,” they said. “We have provided more than £3.4bn to local authorities through the public health grant, enabling them to invest in essential frontline services including sexual health services.”

The body’s international health regulations emergency committee did not reach a consensus on whether the outbreak warranted the declaration, but Ghebreyesus said it was justified because the virus had “spread around the world rapidly through new modes of transmission about which we understand too little”.

He said the risk of monkeypox was “moderate” globally and “high” in Europe and that there was “a clear risk of further international spread”.

The UKHSA said last week that transmission continues to occur primarily within interconnected sexual networks. “The most recent data suggests that the growth of the outbreak may have slowed,” it said. “This means that we continue to identify new infections, but at a more stable rate.”

In a statement on Friday, Steve Russell, the NHS director of vaccinations, said: “The NHS is now scaling up its plans to get people vaccinated, particularly in London … Thousands more people will be invited very shortly, with the number of clinics expanded too … We are asking people to wait to be contacted and to come forward at the earliest opportunity possible when invited to get vaccinated.”
#Vaccines  #vaccine
Add Comment