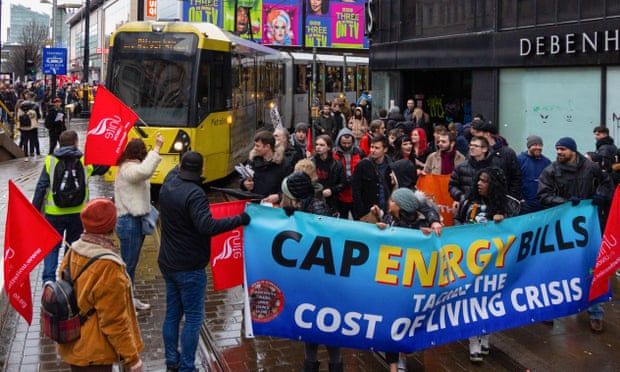 Resolution Foundation warns record-high energy prices amid Ukraine war could lead to hit worth £1,000 per household
UK household incomes are on course to collapse by the most since the mid-1970s after Russia’s invasion of Ukraine sent energy prices soaring to new highs, a thinktank has said.

The Resolution Foundation said the dramatic increase in global oil and gas prices was forecast to push UK inflation above 8% this spring, causing average incomes across Britain to fall by 4% in the coming financial year – a hit worth £1,000 per household, the biggest annual decline since 1975.

Warning the chancellor, Rishi Sunak, that urgent steps were required to help the poorest families in Britain with soaring living costs, the thinktank said weak wage growth and high inflation were expected to drive more children into poverty.

Inflation in the UK was already at 5.5% – the highest rate for 30 years – before Vladimir Putin ordered his troops into Ukraine. Now economists are warning that the conflict’s impact on global oil and gas prices will add to inflationary pressures around the world.

Although the UK sources relatively little of its gas supply from Russia – about 5% of its total imports – fears over supply restrictions amid the escalating conflict have driven up global wholesale prices.

Oil prices surged to $139 a barrel on Monday before falling back to about $125. UK gas prices rose to 800p a therm before falling to about 600p – still almost triple the price at the start of February.

The Resolution Foundation said UK inflation could therefore peak at 8.3% this spring, or even exceed the 8.4% rate of April 1991, which was the highest level for the measure of the increasing cost of living since 1982.

It said the damage for household incomes would have been bigger without the £350 boost provided by the government’s energy support package announced last month. Without taking this into account, analysts at the Bank of America last week had forecast the biggest drop in living standards since at least 1956.

The warning comes as the government prepares to increase the value of working-age benefits and the state pension by 3.1% from April. Over the course of this year, the Resolution Foundation estimated this would mean a real-terms cut in the value of benefits of more than £10bn.

The thinktank said Sunak needed to take evasive action to protect households from the squeeze. Adam Corlett, the principal economist at the Resolution Foundation, said: “The immediate priority should be for the chancellor to revisit benefits uprating in his upcoming spring statement.”

The chancellor has come under increasing pressure in recent days to use his mini-budget to address the economic impact of the conflict at home and abroad, including from backbench Conservatives urging a rise in defence spending and trade unions calling for more humanitarian aid for Ukraine and support for UK workers.

Tom Keatinge, the director of the Centre for Financial Crime and Security Studies at the Royal United Services Institute, told MPs on the Treasury committee on Monday that Sunak needed to provide an urgent update.

“I would like to hear from the chancellor about how is he thinking about the impact of sanctions on the UK economy. It’s clearly a massive issue for the UK. So it would be good to hear how are the thoughts around dealing with cost of living crisis. How is that being thought through? I think communicating that soon would be important,” he said.

Retail industry bosses are warning that the squeeze on living standards would hit consumer spending this year, weighing down the UK’s economic recovery from Covid-19.

However, Helen Dickinson, the chief executive of the consortium, said sales would soon come under pressure. “The future is looking increasingly uncertain, with current demand unlikely to be sustained,” she said. “The cost of living will continue to spiral due to global inflation, increasing energy bills and the rise in national insurance this spring. With households facing lower disposable income, discretionary spend will be one of the first things to feel the squeeze.”

A Government spokesperson said: “We recognise the pressures people are facing with the cost of living, which is why we’re providing support worth around £20 billion this financial year and next to help.”
#COVID-19  #Covid
Add Comment