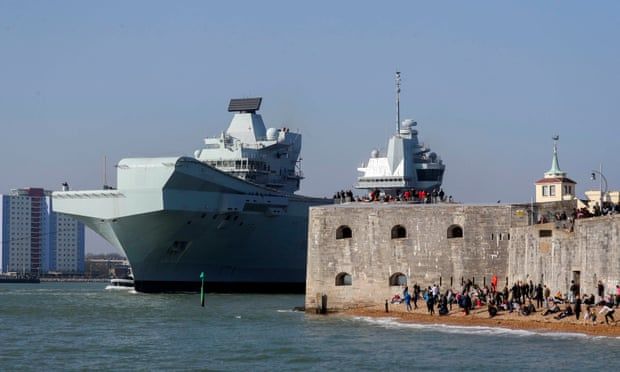 Downing Street’s delayed post-Brexit review of defence and foreign policy will be published on 16 March, which promises to reset Britain’s international priorities with an Indo-Pacific tilt aimed at creating a democratic counterweight to China.

The integrated review is expected to argue for a strengthening of the UK’s military and diplomatic position in south and east Asia at a time of heightened concern on the Conservative benches about the growing power of Beijing.

Publication date was confirmed earlier on Friday by Downing Street to be followed by a defence command paper on 22 March, detailing a five-year plan for the armed forces in response to the wider strategy.

A leaked document seen by the Guardian showed that plans to be announced shortly include investing in “China-facing capabilities” to “better understand and respond to the systemic challenge that China poses” – thought particularly to focus on cybersecurity.

The UK will also “pursue deeper engagements in the Indo-Pacific” region, and more regularly deploy the armed forces overseas, as well as bolster efforts to detect, deter and respond to “state threats”.

Key issues to be resolved include the detail of the deployment of UK’s new Queen Elizabeth aircraft carrier, which is due to sail to the Pacific and may be deployed in the South China Sea, where China claims territorial waters.

Critics argue that the UK lacks the strength to have a major influence in the far east, and while defence capital spending was substantially increased in an announcement made by Boris Johnson in November, aid budgets have been slashed while pressure on revenue budgets in defence remains.

The defence command paper is expected to confirm a cut in the size of the British army to 72,500 from a nominal target of 82,000, although its actual size is 75,310. The fleet of ageing Challenger tanks is likely to be cut by around a third.

Labour urged ministers to be realistic. John Healey, the shadow defence secretary, said previous strategic reviews had been “overambitious and underfunded”, ultimately weakening the foundations for the armed forces. “This review must not make the same mistakes and must not duck tough decisions,” he added.

Whitehall sources said they expected the IR to be a relatively short aspirational document, in effect a definition of Boris Johnson’s loose Global Britain agenda, with key details to follow.

According to the presentation shared with civil servants, Johnson will also announce plans to reform the World Health Organization and restate that the US remains Britain’s most important ally. Reflecting Brexit, it added that the UK should be being prepared to diverge from Europe “where it is in our interests”.

The review has been repeatedly delayed by the pandemic. Most recently it had been hoped that a visit by Johnson in January to India for a summit with the prime minister, Narendra Modi, would act as a springboard for the new strategy.

But the trip had to be postponed to later in the spring as the disease took off at home, although Downing Street had already invited Modi and the leaders of South Korea and Australia to attend the G7 meeting being hosted by the UK in Cornwall in June.

Downing Street also confirmed that it had asked Gen Sir Nick Carter, the head of the armed forces, to remain in post until November to bed in the review – while Stephen Lovegrove, the permanent secretary at the MoD, moves over to become Johnson’s national security adviser.

Carter’s replacement is expected to come from among the service chiefs. Strong contenders are considered to be Sir Patrick Sanders, head of strategic command, covering cyber and special forces, and Adm Tony Radakin, the first sea lord, who heads the Royal Navy.