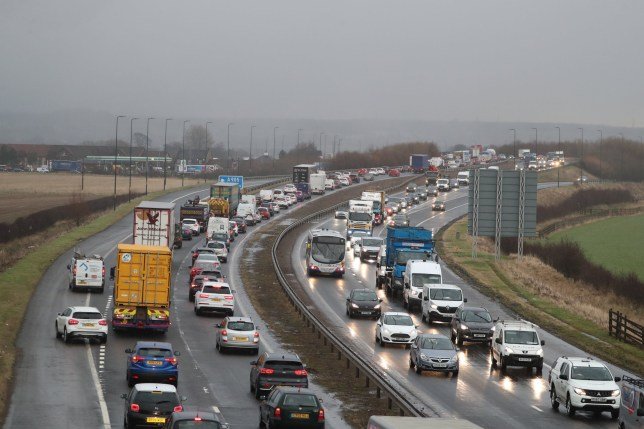 The country loses £6.9 billion each year as a result of people being stuck in traffic, according to new research.
UK road commuters lost an average of 115 hours stuck in traffic last year, which cost the £894 individually, traffic analyst Inrix said.
London was found to be the most congested city, with 149 hours lost per driver during peak periods in 2019.

It was ranked eighth in the world for traffic jams.

Belfast was the UK’s second-worst city for hold-ups at 112 hours per driver, followed by Bristol (103 hours), Edinburgh (98 hours) and Manchester (92 hours).

He said: ‘You have very severe congestion and a massive, relatively high earning population.

‘UK cities are quite a bit older and a lot denser than American cities. London is over 2,000 years old.

‘When you develop around walking, and horse and buggy, and everything but cars, the urban environment does not handle (cars) all that well.

Cardiff saw the biggest year-on-year growth in congestion (up 5% to 87 hours).

Mr Reed added: ‘You can reach a tipping point with a city. You add just enough cars to make nothing work.

‘Sometimes you add one or two per cent more cars, and it causes a viscous cycle of congestion to set in.’

Nottingham’s congestion decreased by 17% to 78 hours, which was the biggest drop in the UK top 10.

The A404/A501 from Edgware Road to Old Street in London is the UK’s most congested corridor, with commuters losing 44 hours last year.

Outside the capital, the A38 in Birmingham caused the biggest delays at 32 hours.

London and Edinburgh tie for the title of the UK’s slowest city, with the average speed of the final mile of a journey just 10mph.

A Department for Transport spokeswoman said: ‘This Government is determined to improve journeys for all motorists, which is why we’re investing nearly £29 billion to reduce congestion on our roads up to 2025.

‘Looking to the future, our £2.5 billion Transforming Cities Fund will help develop innovative public transport projects, while the tripling of our investment per head in cycling and walking since 2010 is encouraging people to try other ways of getting around – helping create less congested towns and cities.’
Add Comment