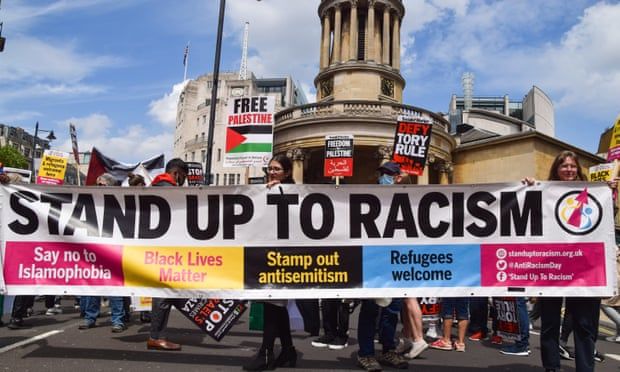 Campaigners praise improvement since 2017, but warn that some sectors show zero progress or ‘glacial’ change
The number of people from ethnic minority backgrounds in prominent public positions has more than doubled in the past four years, according to analysis from an influential campaign group.

There were 73 black, Asian, and minority ethnic (BAME) faces in the UK’s top political, public, cultural and media sectors on 23 July 2021, according to data collated by Operation Black Vote (OBV). This is more than twice the 36 public figures found by the same campaigners in 2017.

However, this means every person from a BAME background who holds such a position could fit on a Routemaster double decker bus – with room to spare. The project’s coordinator warned that “the struggle continues”, even if the trend is positive. About 14% of the UK’s population is from a BAME background, according to figures from Diversity UK.

Some sectors have made more progress than others. The greatest shift has been in politics, which has seen significant and positive changes from Labour and the Conservatives, with the prime minister appointing a record number of BAME cabinet members (six) and ministers (seven) to his government. Labour, meanwhile, boasted a record number of BAME mayors (four) and council leaders (11).

Other small but significant changes occurred in education with six BAME vice-chancellors appointed to universities; three people from minority backgrounds taking the helm of the top NHS trusts and six BAME bosses of FTSE 100 firms.

However, in other areas the situation remained stagnant – the police, the supreme court and the security services continued to have a complete absence of non-white leaders at the top.

Simon Woolley, director and co-founder of OBV, said the death of George Floyd and unprecedented Black Lives Matters protests had resulted in some deep and, at times, uncomfortable conversations about race inequality across a number of different organisations.

“These conversation had almost never been heard before,” said Woolley. “OBV’s groundbreaking data would suggest that those conversations are now translating into real change in regards to what power looks like.”

However Woolley said the Colour of Power data, had also “painfully highlighted” those categories where there is still zero progress or glacial change”.

“The challenge and hope is to keep the positive momentum going from strength to strength. That must include conversation, acknowledgment and positive action. When this occurs everyone benefits,” he said.

Ashok Viswanathan, the Colour of Power coordinator, said the project had seen significant change since the 2017 poll but there was still work to be done as the new figures were still only a 50% reflection of modern society.

“Regretfully there are some institutions that are still solely white and largely male four years on and after the summer of Black Lives Matter. The struggle continues,” he added.

In 2017 OBV found that barely 3% of Britain’s most powerful and influential people were from minority ethnic groups which highlighted a disconnect with the composition of the UK population, almost 13% of whom have a minority background.
Add Comment