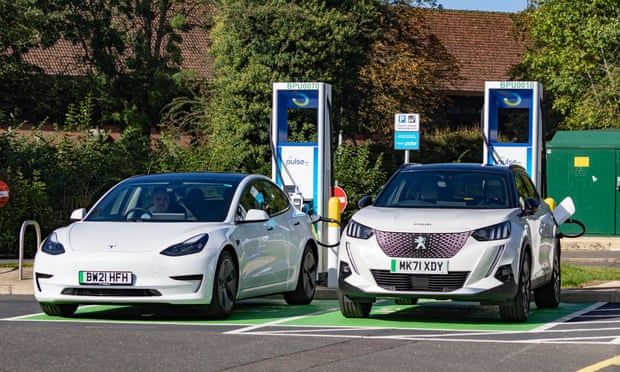 Subsidy available will fall from £2,500 to £1,500 – half the sum available to buyers at the start of the year
The UK government has cut grants for electric vehicles for the second time in a year, provoking the anger of the car industry and prompting a call for car tax to be redesigned.

Electric cars – which produce zero carbon dioxide exhaust emissions – accounted for 19% of cars sold in the UK in November, as carmakers bring a series of new models to market and demand soars amid rocketing fuel prices.

The government is helping with a mixture of stick – including large fines for carmakers who make too many polluting cars – and carrots like the plug-in car grant and some tax exemptions.

However, the rising take-up of electric cars has presented a problem to the Treasury, which has been alarmed by the increasing cost of subsidies, many of which are enjoyed by wealthier buyers who can afford a new electric car, as well as the impact on fuel duty.

Some experts argue that government funding would be better aimed at problems such as still-patchy charging infrastructure. At the same time, the government has allocated as much as £50bn in implicit subsidies to petrol and diesel consumption by freezing fuel duty for a decade.

Greg Archer, UK director of Transport & Environment, a campaign group, said: “I think it’s inevitable that grants will be progressively phased out, and it’s right that they should be. The government can’t keep bankrolling this transition, but it needs to make sure there are good incentives for all parts of the market.

“We could be doing just as much by increasing the taxes on large, high-emitting vehicles.”

The industry argues that the government should not be making electric cars more expensive while also trying to encourage more people to buy them.

Paul Willcox, the managing director of British brand Vauxhall, which is owned by multinational conglomerate Stellantis, said a “more strategic, longer-term approach” was required from government, and argued that the UK is lagging behind other European countries which are still heavily subsidising purchases.

Mike Hawes, chief executive of the Society of Motor Manufacturers and Traders, said: “Slashing the grants for electric vehicles once again is a blow to customers looking to make the switch and couldn’t come at a worse time, with inflation at a 10-year high and pandemic-related economic uncertainty looming large.

“We need to move the market even faster – from one in a hundred cars on the road being electric, to potentially one in three in just eight years – which means we should be doubling down on incentives.”
Add Comment