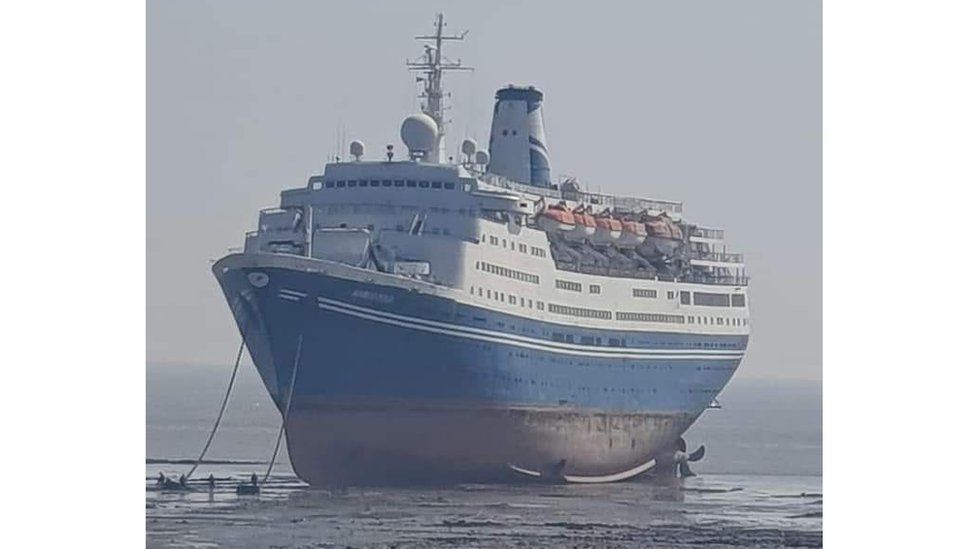 Ships at the end of their lives are considered hazardous waste and it is illegal to send them to developing countries from the UK.

But months after being sold at auction to buyers outside the UK they were then sold on as scrap for double the price.

As they were set to be used for further trading when they left UK waters, their arrival in India does not break UK law.

An investigation by the BBC's File on 4 programme found at least 13 other ships, mostly cargo ships, linked to the UK had arrived at the scrapping beaches of India, Pakistan and Bangladesh since the start of 2020.

The Marco Polo and the Magellan were sold at auction in November after their owners Cruise and Maritime Voyages went into administration.

The Marco Polo was built in the 1960s and was one of the world's last surviving ocean cruise liners. It was scheduled to take UK passengers to the Amazon and Norway this year, but its final voyage was to Alang in India.

The ship-breaking yards of Alang dominate a stretch of muddy beach just up the coast from Mumbai in north-west India, referred to as the world's largest ship graveyard.

The ship was bought at auction for around £2m by offshore company Highseas Ltd. After the sale, it was released from UK waters on the condition it would be used for 'further trading'.

HighSeas Ltd said the cruise ship would be used as a floating hotel in Dubai.

But two months after taking ownership of the Marco Polo, it was sold as scrap for around £4m.

HighSeas Ltd director Rishi Arggawal said it was always their intention the Marco Polo would be sold to new owners "but regrettably, the intended buyers in Dubai refused to take delivery".

Mr Arggawal said they tried to find new work for the Marco Polo as a cruise ship or a hotel without success, before selling to "Indian interests".

It is a similar story for the Magellan, which was meant to be used as a floating hotel in Liverpool for the 2021 Grand National.

It was bought at the auction by a Greek ship owner. Brokers say it was sold on for scrap after no new buyer was found.

The cruise ship industry do send old ships to be scrapped safely at EU-approved yards, but when sold at auction, which often happens when a company goes into administration, this decision is taken out of the previous owner's hands.

There are serious concerns about the environmental impact and working conditions in the ship-breaking industry across south Asia.

Each year around 800 ships come to the end of their lives and need to be broken apart and recycled.

Although this work can be carried out in the UK and other EU-approved ship-breaking yards, around 70% of the world's ships end up on the beaches of India, Pakistan and Bangladesh as these yards offer much higher prices for scrap steel.

The organisation Ship-breaking Platform has documented the deaths of more than 400 workers on these beaches since 2009.

It has recorded fatal accidents in the yards from workers falling from height and being killed in gas explosions, as well as longer-term sickness from exposure to toxic materials such as asbestos. 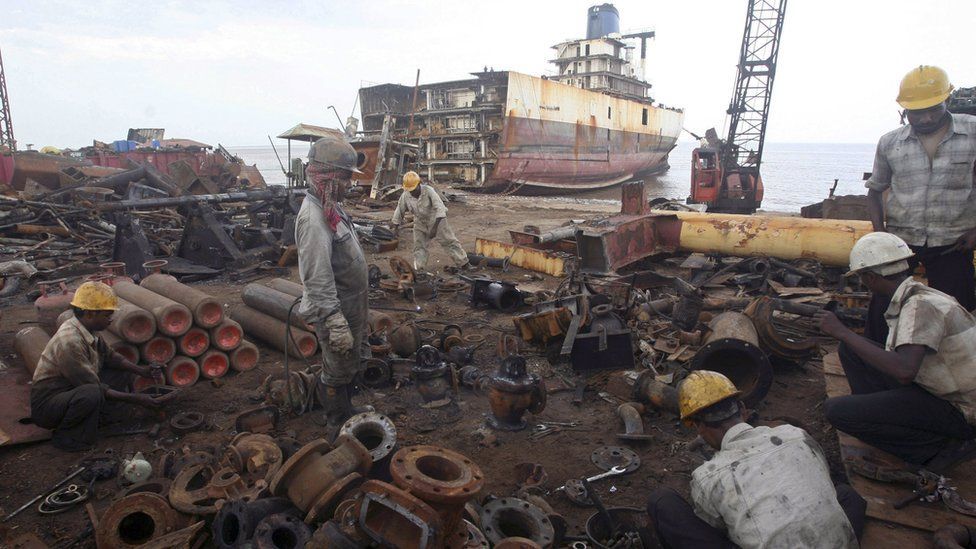 Ship-breaking Platform's director, Ingvild Jenssen, said despite laws in place making it illegal for developed countries like the UK to send hazardous waste such as old ships to developing countries, they continue to arrive

Ship recycling consultant Merijn Hougee from Sea2Cradle says asbestos is not treated as a hazardous material in India.

"If you have a vessel built in the 60s, it is likely there are larger amounts of asbestos on board. There's a ban on asbestos in Europe, but in India, it's freely being traded and sold and used as second-hand building materials."

A ship-breaking worker in India who spoke to the BBC said they "pump waste, like oil and petrol, into the sea when clearing out a ship, or we use it to burn other materials on the shore".

He said he has been badly burned on two occasions and did not receive sick pay while recovering.

Once he had to be driven an hour away to hospital as the one near the yards did not have the facilities to deal with serious injuries.

"I don't think the public want to see ships that were owned by British companies polluting beaches all around the world. I think they want to see them properly disposed of, properly recycled."

The UK government said: "The illegal export of waste is a significant threat to the global environment, and those convicted could face two years in prison or an unlimited fine."