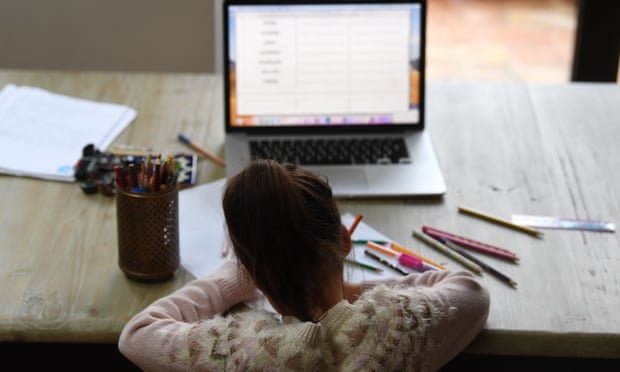 A letter to the Observer calls for an urgent review of the long-term impact of lockdowns and school closures on a generation
Boris Johnson is facing demands from doctors, senior politicians and charities for a wide-ranging commission to examine the pandemic’s “devastating effect” on children, amid growing concerns about its impact on their education, development and mental health.

A major coalition of child health experts warns that many families are being “swept into poverty” by the pandemic, which is set to significantly add to the 4 million children living in deprivation before the Covid crisis.

In a letter to the Observer, they also warn of a “yawning gap” in attainment between rich and poor due to school closures, while the number of children facing mental health issues and distress will rise “with every day that lockdown keeps them isolated and uncertain about their futures”.

“Children’s welfare has become a national emergency,” says the letter, whose signatories include the Royal College of Paediatrics and Child Health, the National Children’s Bureau and some of the country’s leading child health academics. “An independent commission, to inform a cross-government strategy to steer children and young people clear from the lingering effects of Covid-19, could avert this deepening crisis. At present we have piecemeal solutions and stop-gap measures. The next generation deserves better.”

It warns that the challenges have been made harder by a decade of cuts to services families rely on. Some 1.5 million children under 18 will either need new or additional mental health support as a result of the pandemic. A third of those are new cases, according to the Centre for Mental Health.

Lee Hudson, a consultant paediatrician and chief of mental health at Great Ormond Street hospital, said: “We know from the data that children and young people’s mental health has been deteriorating in this pandemic.

Clinicians are seeing the effects of that every day: for example, the numbers of children presenting with eating disorders have dramatically increased. For children living in poverty, the risks are even greater. We’ve never needed a long-term strategy for child mental health more.”

The attainment gap was already growing before the pandemic hit. Poor pupils in primary school were 9.2 months behind their peers in 2018, rising to 9.3 a year later, according to the Education Policy Institute.

Dr Xand van Tulleken, presenter of CBBC’s Operation Ouch!, said: “I have been making television programmes and doing online sessions for kids and families through the pandemic. I hear and see every day how the restrictions and disruptions of lockdown present a huge challenge to families and to children.

The urgency of the death toll from Covid has meant that these issues haven’t had the attention they need in order to mitigate against harms to an entire generation. An independent commission would be an excellent starting point to start to address this.”
Advertisement

The call for an independent commission has already gained some political support. Estelle Morris, a former Labour education secretary, said: “It is a cruel irony that the government’s action in policy areas affecting children and young people has been the most chaotic and disorganised. A commission would need to work quickly and the government would need to listen to what it says, but all that must be possible in such an important area.”

David Blunkett, another former Labour education secretary, said he supported the “deep and justifiable concerns” raised by the group. “It needs to be a very rapid process as any delay in acting to reverse the impact would lead to even greater distress and detrimental impact on the life chances on a whole generation,” he said.

Senior Tories also have concerns about the impact of the pandemic. Damian Hinds, who served as education secretary under Theresa May, said: “The signatories are quite right that the impact on this generation is immense and many-faceted, and could still be felt many years from now. The school system, Child and Adolescent Mental Health Services [CAMHS], children’s services departments and others will all face unprecedented challenges and will continue to evolve plans. But it also makes sense to look at the issues as a whole and how they interact.”

Justine Greening, a fellow former education secretary, said: “Britain needs a comprehensive plan to level up opportunity across our country, one that transcends party politics. It’s clear that Covid-19 has brutally widened inequalities, but if we work collectively on solutions then we have the best chance of building a fairer, levelled-up Britain.”

Robert Halfon, the Tory chair of the education select committee, said lockdowns and school closures had “potentially been a national disaster in terms of attainment, mental health and safeguarding hazards”. He added: “In the short term, the government needs to place mental health professionals in schools so that pupils and parents can access them when they need it. In the long term, they need to look at how the pupil premium is spent, rocket-boost the catch-up fund and come up with a real long-term plan for education.”
#COVID-19  #Covid  #Boris Johnson
Add Comment