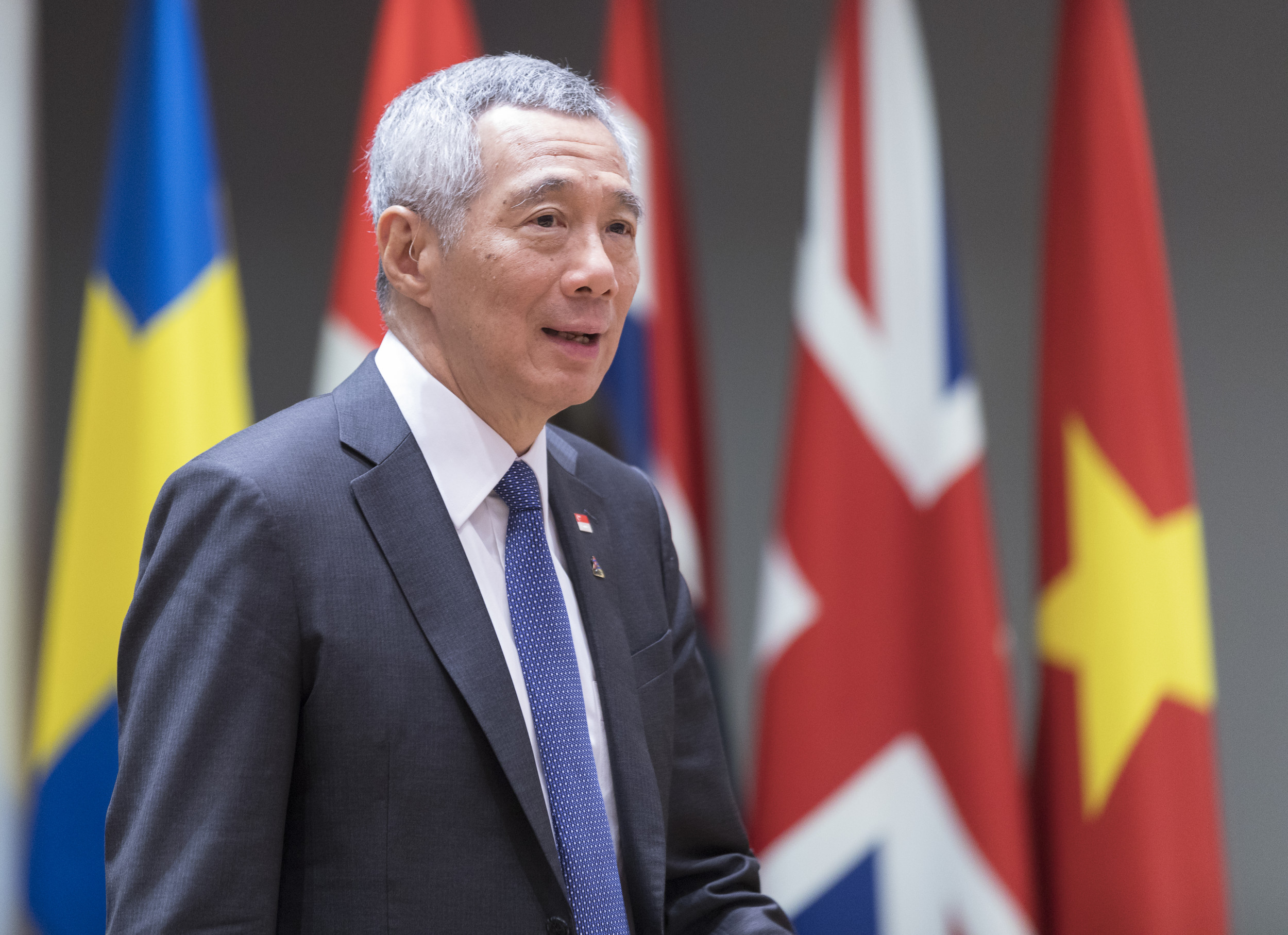 Lee Hsien Loong warned of the danger of "mass miscalculation or mishap" in the Taiwan Strait but felt conflict was not imminent—as long as the U.S. maintained its clear and consistent position.
The prime minister of Singapore warned of "mass miscalculation or mishap" across the Taiwan Strait during an event on Tuesday, in which he highlighted the U.S.' role in deterring conflict and dismissed China's belief in America's "terminal decline."

Lee Hsien Loong said Beijing was unlikely to "make a unilateral move" against Taiwan, despite the Chinese leadership's unambiguous ambition of seizing the democratic island, which the prime minister described as "the mother of all core interests" for Beijing.

"Taiwan independence is an absolute bright red light," Lee said, while noting the "very little support" on the island for Chinese rule under the Hong Kong- and Macau-style "one country, two systems" model.

Beijing would attempt to "constrain Taiwan's international space as much as they can," Singapore's leader predicted, "but I do not think that they will make a unilateral unprovoked move."

"It is high risk. Even if it works, the victory would be decrepit, because what to do with 20-something million people on an island who are not willing citizens?" he remarked.

With high-level dialogue between Beijing and Taipei having effectively broken down since President Tsai Ing-wen's first election win in 2016, Lee said cross-strait relations were "in for quite a difficult period."

"[E]specially as the Taiwanese population's attitudes have been shifting. Two-thirds of Taiwanese now think of themselves as Taiwanese and also want to maintain the status quo," the prime minister said.

But to prevent conflict across the Taiwan Strait, "the American stance is crucial," Lee argued, echoing recent remarks made in Singapore by Defense Secretary Lloyd Austin. "[N]obody is supposed to make a unilateral change," Lee said, "and please make no mistake about that."

As long as the U.S. maintains its clear and consistent positions on the Taiwan Relations Act and its "one China" policy, "then we are able to maintain peace and stability across the Taiwan Strait, which is crucial to the whole region, and I think likely crucial to your overall relationship with China, too," Lee added.

While a cross-strait clash "is something to worry about," he said it was "not tomorrow's conflict."


Decline of the West?

In his opening remarks for the Aspen discussion, Lee described "a palpable sense of relief" in Asia and around the world following the change in leadership at the White House and a return to more conventional U.S. foreign policy featuring multilateralism and a focus on allies and partners.

"Countries are looking for long-term strategic consistency from the U.S.," the prime minister said. "They hope to sustain this policy not just for now, or the next two the three years, but for the long term, beyond the mid-terms and the next presidential elections."

He added: "They hope for a reliable and predictable U.S., which will provide a stable anchor for the international order, as it has done for so many decades."

A "deep shift" in attitudes in Washington and Beijing in the last few years means that the present trend of U.S.-China relations would be "hard to reserve," Lee said. In the U.S., the change is bipartisan and "extends beyond the administration and the Congress into the population."

"In China too, attitudes have become more assertive and robust. China's strategic and economic influence has grown. It has taken a more active international stance. It seeks to reshape the international order to its advantage," he added.

The U.S. and China need to maintain engagement to "head off a clash which would be disastrous for both sides, and the world," he argued.

Lee said Singapore is concerned about the current state of U.S.-China ties. During the Trump administration, Beijing described the relationship as being at its lowest point since 1979.

"This is not a burning issue which will explode on you tomorrow, but it is a progressive issue with very serious consequences. It comes down basically to how the U.S. sees China and how China sees the U.S.," the prime minister noted, adding that China is no longer satisfied with a role on the sidelines.

At the same time, however, he dismissed the notion that the U.S. was now in an irreversible decline, as some around Chinese President Xi Jinping appear to believe.

"I think there is a possible misunderstanding on both sides, because in China people say the East is rising and the West is declining. Some people believe and write about it, that America is in terminal decline. I do not think so," Lee said.

He continued: "I tell them, you look at all the science and medicine Nobel Prize winners who are ethnic Chinese. All of them were either American citizens or became American citizens, except for one, who is a Chinese citizen."

"There is a moral in that. America is able to attract people from all over the world, [has] great talent and vibrancy and ability to reinvent itself, and pick itself up again after it appears to be heading irrevocably in the wrong direction for a long time, which sometimes happens," the prime minister said.

He added: "On the other side, I do not know whether Americans realize what a formidable adversary they would be taking on, if they decide that China is an enemy."
Add Comment