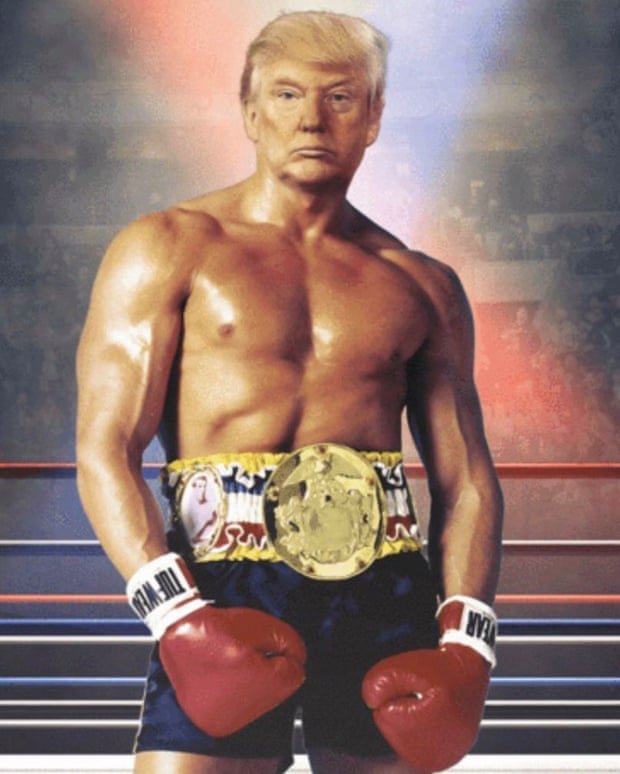 Trump posted a picture of himself as Rocky. No one knows what to make of it

People are used to seeing Donald Trump’s face transposed on to a lot of things: satsumas, the Queen, a giant floating baby flying across the US and the UK.

But this morning, the president himself posted a photo where his head was photoshopped on to something utterly surprising: the super-buff, bare body of the fictional boxer Rocky Balboa.

It was tweeted at 10.54am, with Trump offering exactly zero explanation – not even a caption. All we know is that the tweet was sent during a golf trip at one of Trump’s golf clubs in Florida, during his Thanksgiving holiday at Mar-a-Lago.

Who knows how we should interpret it? Perhaps the 45th president suffered a blow to the head this morning. Or perhaps he wants us to know he’s a fighter. Maybe he’s upset about of all the low blows thrown his way during his tenure, with people saying mean things like “why does he grab women by the pussy?”

Whatever he meant, it led to an outpouring of commentary from the Twitterati. Here’s the roundup.

Could this photo be the ultimate, most real-to-life version of the expectation versus reality meme? Trump, a man born into wealth who became a billion-dollar loser, who eats McDonald’s for breakfast and weighs 243lb (all muscle, of course), comparing himself to a self-made man, born in poverty who rose up against the odds, washboard abs and all. It’s almost too good.

Is it just me or did this Trump Rocky photo make anyone else throw up in their mouth a little?

A lot of jokes about Russia

This is all wrong, joked several pundits. In the Rocky films, Balboa comes up against a Russian protagonist who is supposedly so evil he can’t be beaten. Against the odds, Balboa emerges victorious. He receives a standing ovation from politicians in a crowd and doesn’t even have to doctor any photos.

Some people found Trump’s post a little more than ironic. At least Rocky was willing to fight the Russians, they figured.

“This is all wrong,” tweeted the comedian Nick Pappas. “Rocky defeated Russia – Trump continues to hand them victories.”

At the heart of the first Rocky movie is Balboa’s fear of being replaced, in a competitive sport where he – a working-class Italian American – looks increasingly like an outsider. Of course, Balboa is triumphant against the newcomers, so his sense of insecurity is eased and his pride reasserted.

Some believe that the Rocky films also speak, therefore, to a problem close to Trump’s heart: the (many) anxieties of white voters.

Whoever created this meme image of Trump as Rocky just wanted to show him as a powerful man. And Trump obviously wants to present himself as such. But when you consider the racial politics of the film itself, it’s hard to imagine a more apt piece of political symbolism.

For anyone not sure what to make of all of this, there is a final thought. Leadership takes many forms. No further comment needed.
Add Comment