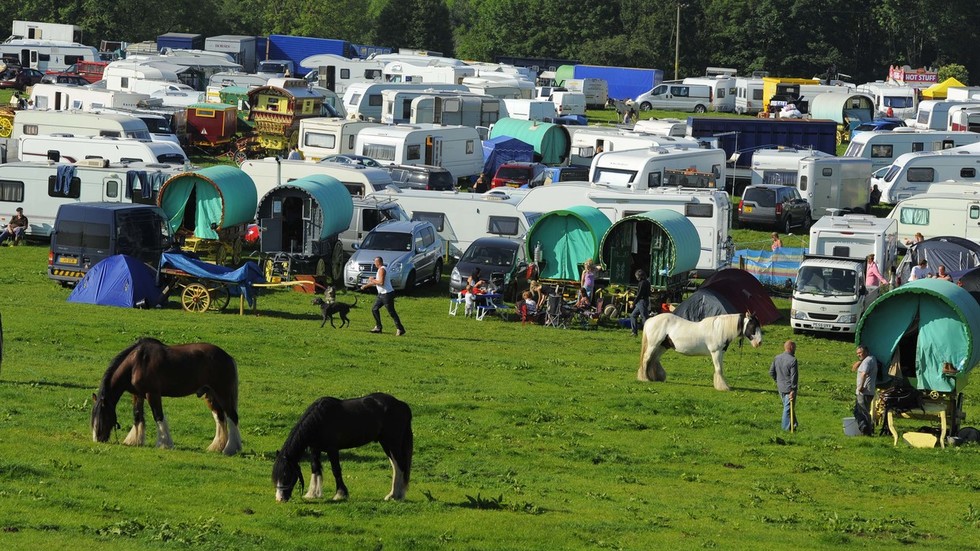 Most of the controversy over the Police, Crime, Sentencing and Courts Bill has raged around its effect on protests, yet very little attention is being given to how it will decimate a historic way of life for thousands of people.
Britain is more divided than at any other time in living memory. There are protests about protests, exemplified by the wave of reaction following the police action at the public vigil for murder victim Sarah Everard. It has also been heightened by a mammoth piece of legislation engineered by Home Secretary Priti Patel, The Police, Crime, Sentencing and Courts Bill. Predictably, there’s been a backlash, mainly because it allows the police to control the start and end times of demonstrations even if they only have one member, which some feel is an eradication of the right to protest.

But hidden deeper are less discussed powers that target the Gypsy, Roma and Travelling (GRT) community in Britain. GRT people have been in the UK since 1515 and their numbers are estimated at around 120,000 today, but some put this as high as 300,000.

Few high profile members of the community exist, although the current World Heavyweight Champion boxer, Tyson Fury, who’s nickname is ‘The Gypsy King’, is of traveller descent. That lack of prominence is why there is very little discussion around the new powers related to GRT people.

Currently, under the Criminal Justice and Public Order Act of 1994, the police can get involved if there are six or more vehicles in an authorised encampment. But the landowner has to take reasonable steps to move them first and they have to "have caused damage to the land/property or have used threatening, abusive or insulting behaviour to the landowner, their family or employees”.

The new bill increases these powers greatly, meaning the police can become involved if there is a single vehicle, the landowner has merely reported the matter and the local authority has an alternate site. It also creates a new offence of "residing on land without consent in or with a vehicle”. Those found guilty can be imprisoned for three months, fined £2,500 and face forfeiture of goods including vehicles, which for the GRT community are their homes.

Ruby-Leigh Smith is part of the Traveling community and comes from Hertfordshire in England – she said: “The fact that Priti Patel and the Conservative Party are planning to fine people for living their way of life – a way which their family has been doing so for generations, is, in my opinion, a breach of the Human Rights Act. Under Article 8, a person is entitled to the right to live a private, family life. You can't fine and imprison people for doing that. Article 14 is the right to protection from discrimination, but I ask how you can be protected from discrimination when it is the very government that is supposed to protect you that is discriminating against you?”

Smith also highlights what appears to be a cultural misunderstanding in the threat to seize property – she added: "A Traveller's home is sacred to them; whether they're in a caravan or not. Our houses are always spotless, you have to take your shoes off at the door – we have certain cleaning rituals, and by seizing our homes, you're imprinting on those cleaning rituals and routines and making our homes feel dirty and unsafe."

Smith revealed that within the community there hasn’t been a lack of shock at the strength of the new powers, as they expect to be treated unfairly. She added: "I'm sorry to say that I am not one bit surprised at the strength of the bill or indeed, what it contains. People are racist to us without even realising that it's racism, or caring about the impact which it has on the young people in our community. I feel that everything is rigged against us; the health system, the education system and the criminal system. Racism towards Gypsies, Roma and Travellers is the last acceptable form of racism, unfortunately, and this bill just proves it.”

The motivation for the British government’s proposal to crack down is unclear, as according to their own statistics 88% of Travellers were on authorised land in England during 2020 and the number of caravans on unauthorised encampment was 694, which was 95 fewer than 2019. So the problem appears to involve a minority of the GRT community and infractions are decreasing without these new powers.

Meanwhile, the statistics around their social inclusion are the opposite. In 2018, 19% of pupils from Irish Traveller backgrounds and 13% from Gypsy and Roma backgrounds attained GCSEs in English and maths at grade 4/C or above, compared to 64% of pupils nationally. They also had higher rates of school exclusions and "high levels of bullying and racial abuse”. The 2011 National Census concluded that Gypsy or Irish Traveller were the ethnic group with the lowest employment rates and highest levels of economic inactivity.

Smith has a strong view on why new powers are being introduced while the community remains disenfranchised. She said: “Laws like these are ethnically cleansing us. We're not being forced into concentration camps like Auschwitz-Birkenau but we're being forced to abandon a way of life that we have followed for centuries. Travelling life is being wiped out, and has been for decades.”

Another member of the community is playwright Richard O’Neill. He points to the removal of places for GRT people to stop, saying: “We have to remember that we used to have a lot of common land and traditional stopping places that we'd used for 500 years which were taken in the 1950s and ‘60s and ‘70s, which left traditional Travelling people without anywhere to stop. Seizing property particularly someone's home is a step too far, and many people who aren't Travelling people but who do park up with their motorhomes could fall foul of this too, we have to remember that in a number of cities we have people living in vans some of those essential workers who simply can't afford high rent. There's good and bad in every community and it's the authorities’ job to deal with those who break the law."

He also points to the mass trespass of Kinder Scout in 1932 by ramblers and the Young Communist League, which was a successful protest to enshrine rights allowing access to areas of open country. That’s widely seen as a positive act but the current crackdown on Travellers isn’t being met with the same degree of empathy.

Stereotypes of the community describe them as being criminals who are prone to violence and have no respect for the land they camp on. But the recent heatwave in Britain has seen the general public guilty of this.

Examples include Northampton’s Abington Park relying on volunteers to clear vast amounts of litter, and it was the same at Nottingham’s Arboretum.

Nevertheless it appears Boris Johnson’s government plans to drive the Bill through parliament.

Smith said: "Nobody should be supporting this bill, regardless of their opinions on Gypsies and Travellers.”

How the situation develops will be watched keenly, but the implications for the GRT community will not be top of the agenda. They will be the single biggest losers from these proposals. What’s clear is they don’t deserve to be treated this way and have their way of life legislated against.
#Priti Patel  #Boris Johnson
Add Comment