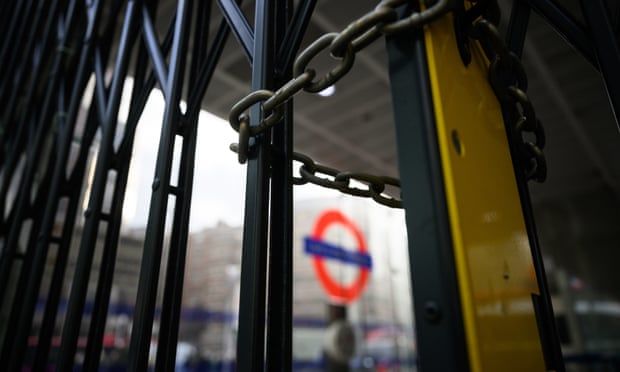 Travellers in London told to avoid tube on Monday as 4,000 station staff strike

TfL warns of severe disruption, while union sources call for entire network to be shut down over safety concerns
London’s transport operator has warned people to expect “severe disruption” on the tube on Monday when 4,000 station staff are due to walk out in a 24-hour strike that will shut down much of the network.

Transport for London said there would be problems across all lines from the start of service on Monday to 8am on Tuesday, with a limited number of stations open. It advised against travel on the tube throughout that period “unless necessary”.

The RMT union has called the strike in protest against TfL plans to cut 600 jobs to reduce costs. Only London Underground station staff will be involved, rather than the 10,000 RMT members who walked out in March.

Sources close to the union said the scale of the walkouts meant the entire tube network should close on safety grounds. TfL said: “Safety is our top priority and we will be doing all we can to safely keep as many services running for our customers as possible.”

Some tube stations had already shut temporarily over the platinum jubilee holiday weekend because of staff not working overtime as part of separate industrial action by RMT that started on Friday and is due to continue until 10 July.

Monday’s action means many stations – especially those in central and south London – will be closed, while those that can be opened may only open for limited periods. TfL said the situation was likely to change throughout the day, depending on whether it had enough staff to keep stations open safely.

If customers cannot avoid travelling on Monday, they are advised to travel after 8am and to complete journeys by 6pm. Buses and other TfL services, including DLR, London Overground and trams, are not affected by the strike and will be operating, but are expected to be busier than normal. The newly opened Elizabeth line will run from 7am – although some stations may be served earlier – until 11pm.

TfL argues it needs to push through the staffing changes to reduce running costs, with revenues still down sharply since the start of the pandemic and London still reliant on additional emergency Treasury funding to balance the books. TfL said the government had ordered it to work towards achieving financial sustainability on its operations by April 2023.

Andy Lord, TfL’s chief operating officer, apologised to Londoners for the impact the strike would have. “We know it’s going to be damaging to London and the economy, at a time when public transport is playing a crucial role in the capital’s recovery,” he said.

“No changes have been proposed to pensions and nobody has or will lose their job as a result of the proposals we have set out. My message to the RMT is this: it’s not too late to call off tomorrow’s strike action.”

TfL has proposed not filling 500 to 600 posts as they become vacant, including 250 tube station posts that remain unfilled. It said this would leave it with more than 4,500 station staff across the network, enough, it added, to assist customers.

TfL met RMT at the conciliation service Acas last week and, while no resolution was reached, it said it was keen for further talks.
Add Comment