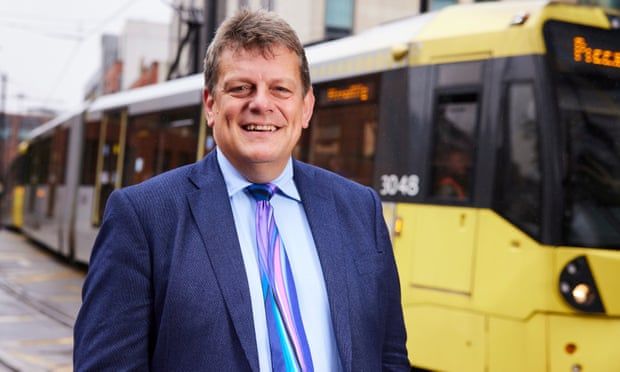 Martin Tugwell says UK government must look at whether to make car use pricier and public transport cheaper
There needs to be an “honest conversation” about making driving more expensive in order to subsidise public transport, according to the new head of the north of England’s strategic transport body.

Martin Tugwell, who took over as chief executive of Transport for the North (TfN) earlier this month, is trying to persuade the government to pay at least £30bn to build a transpennine rail line called Northern Powerhouse Rail, as well as HS2 spurs to Manchester and Leeds.

In an interview with the Guardian, Tugwell said a gap had opened up as public transport fares have risen while driving has become cheaper, thanks to the freeze on fuel duty.

Asked if the government should make driving more expensive to make public transport better and cheaper, he said: “I think that’s something we need to have a debate on because when we start talking about decarbonising our transport system there are some issues we need to talk through as a society, and make a choice about what we are going to have to accept.

“I think we need to have an honest conversation about how we raise the funds to invest in transport.

“It is not an easy conversation,” he conceded, saying “there are large parts of our community, particularly in rural areas, particularly in more less dense areas, where people will not have any choice other than to use a car. And I don’t think we should disenfranchise them.”

Tugwell has strategic oversight of the north’s major roads as well as rail. In 2019, TfN submitted a bid for a £700m road investment as part of the national roads fund, which it said would “unlock economic growth, deliver new homes, increase active travel, and improve public transport”.

TfN, born out of the former chancellor George Osborne’s vision for a “northern powerhouse”, was set up in 2015 to allow northern leaders to “speak with one voice” and tell the government how to improve the region’s transport.

But critics say the body has failed to secure government funding for its flagship projects, noting that TfN’s operational budget was cut this year from £10m to £6m.

There is not yet a legally binding commitment to build Northern Powerhouse Rail, which was supposed to slash journey times between Liverpool and Hull, adding a new through-station in Bradford.

And so far HS2, the high-speed line between London and the north of England via Birmingham, is only currently certain to reach Crewe. The government says it hopes to bring forward a bill to parliament in 2022 to secure the Crewe to Manchester extension but has been silent on whether an eastern spur to Leeds will ever be built.

Asked how confident he was about the eastern HS2 leg, Tugwell said: “We will have wait to see what government finally decides in terms of the eastern leg … we’re clear, that the benefits to the north are of delivering both HS2 and Northern Powerhouse Rail together. They are an integral part of the rail network for us.”

The government has repeatedly postponed the publication of the integrated rail plan, which the transport minister, Andrew Stephenson, said in June would “outline exactly how these major rail projects … will work together to deliver the reliable train services that passengers need and deserve.”
Add Comment