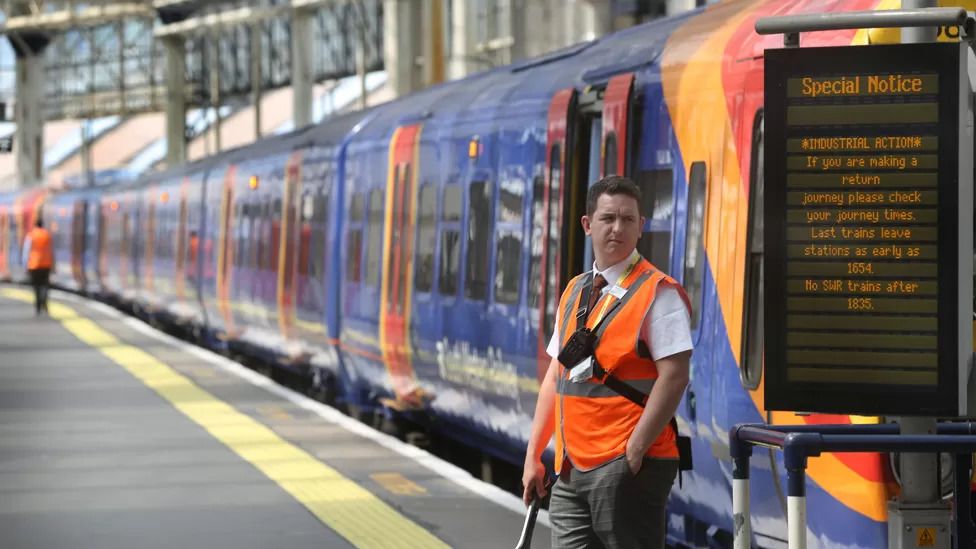 Rail workers will hold fresh strikes in a long-running dispute over pay, jobs and conditions, the RMT union has said.

The first day of these strikes coincides with a walkout by train drivers at 12 rail companies.

The Aslef union said the action by 9,000 of its members will be the biggest strike drivers have taken part in so far.

The RMT walkout follows six previous days of strike action by its members across June, July and August.

"[The track operator] Network Rail and the train operating companies have shown little interest this past few weeks in offering our members anything new in order for us to be able to come to a negotiated settlement," he said.

"We will continue to negotiate in good faith, but the employers and government need to understand our industrial campaign will continue for as long as it takes."

A Department for Transport spokesperson said: "Yet again, union leaders are choosing self-defeating, co-ordinated strike action over constructive talks, not only disrupting the lives of millions who rely on these services but jeopardising the future of the railways and their own members' livelihoods."

The spokesperson said reforms proposed by the rail operators were essential to modernise the service and the strikes "will not change this".

Andrew Haines, chief executive of Network Rail, said it wanted to give staff a decent pay rise and was doing everything it could to find a breakthrough in talks.

He said: "Our latest offer of a two-year 8% pay rise, with heavily discounted travel and a guarantee of no compulsory redundancies, is affordable from within our own budgets, but the RMT remains unwilling to give its members the chance to vote on it despite knowing that members at another union overwhelmingly accepted a similar deal."

Steve Montgomery, chairman of the Rail Delivery Group, which represents train companies, urged the RMT to call off the strikes.

He said the walk outs were "cynically timed to cause maximum disruption to the very passengers the industry depends on for its recovery".

He added: "We absolutely want to give our people a pay rise and we know they are facing a squeeze - but the RMT must recognise that with revenue consistently at 20% below pre-Covid levels, the only solution lies in long-overdue reforms that will put the industry on a sustainable footing and improve services for passengers."

If these latest train strikes go ahead, RMT members will have taken part in eight days of national-scale strike action within three months.

Thursday 15 September will be the first to coincide with a strike by train drivers in another union, Aslef.

That could mean more extensive disruption than earlier national strikes, but it's too early to say for sure. Judging by previous occasions, timetables won't be available until much nearer the time.

Negotiations between the RMT and the rail industry have continued, and more are expected. But it's obvious not enough progress has yet been made to prevent more industrial action.

At the moment, it's not clear how the deadlock will be broken.

Walkouts on 15 September will disrupt travel to the women's international T20 cricket match between England and India at the Seat Unique Stadium in Bristol.

There are also Premier League football matches between Wolverhampton Wanderers and Manchester City, Brighton and Hove Albion and Crystal Palace, Newcastle United and Bournemouth, and Tottenham Hotspur and Leicester City.

And cricket team Kent Spitfires will take on Lancashire Lightning in the final of the Royal London Cup in Nottingham.