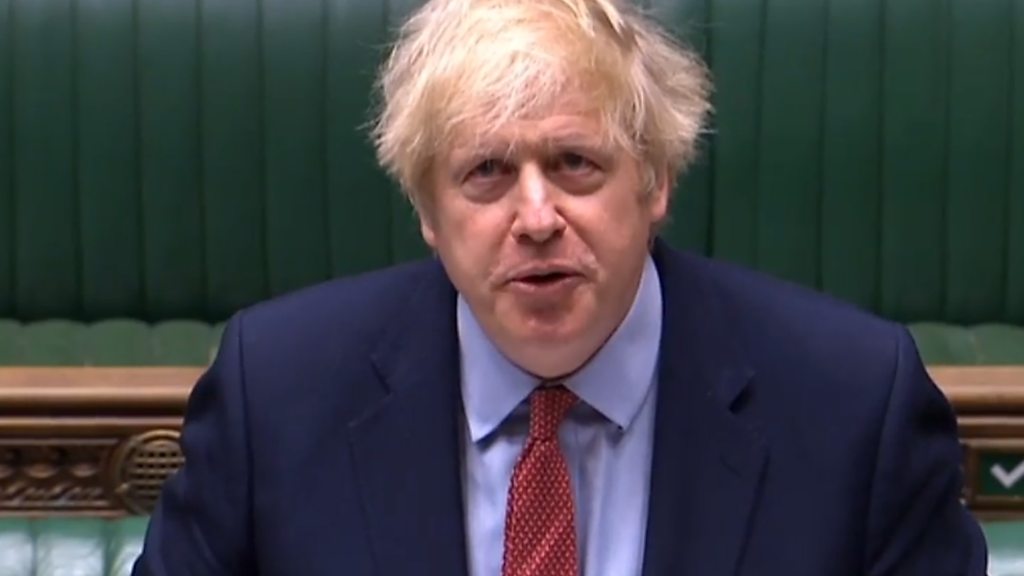 Track and trace system in place from June - PM

The PM says England will have a "world-beating" tracing system from June, as he was accused of leaving a "huge hole" in the country's coronavirus defences.

BBC health correspondent Nick Triggle said it was unlikely to be a "fully-functioning perfect system" by then.

Labour leader Sir Keir Starmer challenged the PM over the absence of a tracing system since March.

Contact tracing is a system used to slow the spread of infectious diseases like coronavirus, and is already being used in Hong Kong, Singapore and Germany.

One method involves the infected person listing all the people with whom they have had prolonged and recent contact, to be tracked down by phone or email.

Another uses a location-tracking mobile app, which identifies people the patient has been in contact with.

The NHS contact tracing app - which is currently being trialled on the Isle of Wight and was initially meant to be launched across England in mid-May - will be rolled out at a later date, No 10 suggested.

Northern Ireland already has a telephone contact tracing system in place, while the Scottish government is currently trialling one. The Welsh government wants its "test, trace, protect" programme operational by the end of May.

It comes as the number of people who died after testing positive for the virus increased by 363 to 35,704, the government said on Wednesday.

Speaking at Prime Minister's Questions, Sir Keir asked why there had been "no effective" attempt to trace the contacts of those infected with Covid-19 since 12 March "when tracing was abandoned".

Mr Johnson replied: "We have growing confidence that we will have a test, track and trace operation that will be world-beating and yes, it will be in place by June 1."

He added that 24,000 contact tracers had already been recruited.

The 1 June deadline will also mark the earliest possible date for the gradual reopening of schools and non-essential shops in England.

The PM also insisted that the UK was now testing more than "virtually every country in Europe", and promised that the system would be stepped up in the next fortnight.

Leading scientist Prof Hugh Pennington said the pledge was "good news" as it was "essential if we're going to go anywhere near getting out of lockdown, opening schools".

"It's taken a long time. As to world-beating, well we've been beaten by quite a few other countries by having such a system running."

He added that contact tracing was "really very labour-intensive work".

Also at PMQs, Sir Keir queried whether people were being tested in care homes, after the boss of a body representing care homes in England said on Tuesday that there were problems.

Mr Johnson said 125,000 care home staff have been tested and that the government was "absolutely confident" it would be able to increase testing in care homes and "across the whole of the community".

He added: "And thanks to the hard work of [Health Secretary Matt Hancock] and his teams, we will get up to 200,000 tests in the country by the end of this month."

It comes as the prime minister said the deaths of 181 NHS workers and 131 social care workers had reportedly involved Covid-19.

The UK is setting up a taskforce to help live sports and arts events return to normal safely, Culture Secretary Oliver Dowden has said. It will be made up of "experts in their field" including sports presenter and former footballer Alex Scott and Lord Grade, the former chairman of the BBC and ITV
Mr Johnson also rejected calls to scrap the fees that overseas health workers have to pay to use the NHS
At least 11 councils have expressed safety concerns over the government's plan to reopen English primary schools to some pupils on 1 June
Derby-based firm Rolls-Royce, which makes plane engines, has said it will cut 9,000 jobs because of the coronavirus crisis hitting the airline industry
War veteran Captain Tom Moore who raised £32m for NHS charities has said he is "overawed" after finding out he will receive a knighthood
The boss of Marks and Spencer's has warned that customers "may never shop the same way again"
Outsourcing firm Serco has apologised after accidentally sharing the email addresses of almost 300 contact tracers.
Add Comment