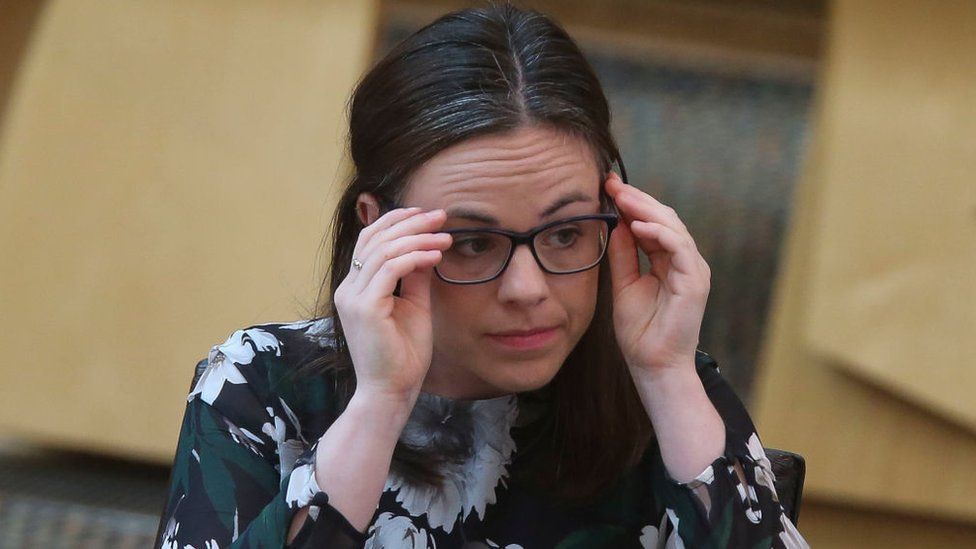 Scotland's economy is in a "very difficult position" which will force tough spending decisions in the coming months, the finance secretary has said.

Kate Forbes said tackling the cost-of-living crisis while still feeling the effects of the pandemic made her upcoming financial review critical.

It came after the Institute for Fiscal Studies (IFS) warned of an estimated £3.5bn funding gap by 2026/27.

The IFS has said the government could be forced to choose between axing key policy priorities or increasing taxes to tackle the deficit.

The shortfall is the equivalent of £640 per person and the IFS warned it could rise even higher.

Ms Forbes' spending review on Tuesday will be the first time a multi-year plan has been announced in more than a decade.

'Need to be canny'

The finance secretary said she will set out plans to focus public sector funds "to achieve ambitions to tackle child poverty, reach net zero and deliver sustainable services for the future".

She said: "These are challenging times, and we need to be canny with our spending, but I'm confident that if we work together we can get through this cost-of-living crisis and still achieve our ambitions.

"We face a very difficult financial position over the next few years with funding increases below inflation levels and the challenge of recovering from the pandemic without the financial tools available to every other government in the world.

"That means that while the spending review is not a budget, it will include difficult decisions to ensure we can really focus on supporting households and services at this time."

The Scottish government is using its new welfare powers for more generous benefits than in the rest of the UK.

It faces heath service backlogs coming out of the Covid crisis, and income tax - although raising rates for higher Scottish earners - is generating less revenue than expected.

So the Institute of Fiscal Studies warned on Friday that either taxes will have to go up, significant cuts will be required or, with tightly constrained borrowing powers, Kate Forbes could simply hope that Westminster will deliver more funding than it has set out so far.

This week's review of non-capital spending until 2026 to 20227, the end of this Parliamentary term, should show which of these ministers are choosing.

In setting expectations, Kate Forbes today warns the difficult financial position will require difficult decisions, with a focus on protecting households and services.

But opposition parties have condemned the Scottish government's handling of the economy.

Scottish Conservatives finance spokesperson Liz Smith MSP said: "It appears Kate Forbes' response to warnings from the IFS of a £3.5bn black hole in the SNP government's spending plans is to stick her fingers in her ears.

"Years of economic mismanagement by the SNP - including squandering taxpayers' cash on failed public sector projects like the ferries fiasco - has left Scotland's finances in a perilous state. Yet there is no acknowledgement of this in Ms Forbes' pre-spending review spin.

"The reality is Scots face big public spending cuts, huge tax rises or a combination of both if the SNP are to bridge the huge funding gap they've created."

He said: "It is clear that the spending review will reveal the heavy cost of the SNP economic mismanagement.

"You can hear them trying to get the excuses in now, but the truth is that during a cost-of-living crisis, Scots will pay for nationalists prioritising the constitution over the economy.

"This will be counted in lost jobs, cuts to public services and few will be able to forgive the SNP for it."