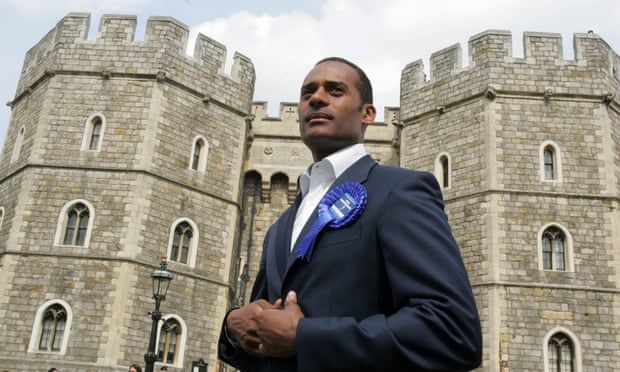 Exclusive: court records show petition filed by HMRC against Adam Afriyie, MP for Windsor
A Conservative MP is facing bankruptcy proceedings over unpaid taxes that could result in him having to step down.

In a fresh blow for Boris Johnson’s embattled party, court records show a petition for bankruptcy has been filed by HMRC against Adam Afriyie, who has represented Windsor since 2005. Afriyie is described as a “litigant in person”, suggesting he intends to represent himself.

Under parliamentary rules, sitting MPs who are declared bankrupt have to step aside. That would create turmoil for the prime minister, whose party is already facing three byelections.

Afriyie, 56, was brought up on a council estate in Peckham, south London, but built a reputation as a successful entrepreneur after setting up the IT firm Connect Support Services and then cofounding the political information provider DeHavilland. Shortly after he was first elected in 2005, that business, of which he owned 72%, was sold to publishing giant Emap for £13m.

He paid £4m for a house in his Windsor constituency in 2008, according to Land Registry records. It was described by estate agents at the time as having an octagonal music room and an ornamental bell tower, as well as eight bedrooms. It emerged in 2015 that the house was being rented out on AirBnB for about £1,950 a night. Reviews showed the property has been rented a minimum of eight times in a year, suggesting at least £15,600 was paid based on the advertised price.

However, Connect Support Services went into insolvency in 2017 and it was reported at the time that it had racked up £1.7m of debts with HMRC, which is the lead creditor in Afriyie’s forthcoming bankruptcy case. He was first reported to be facing potential bankruptcy proceedings before the 2019 election.

A spokesperson for Afriyie said: “The petition arises for complex reasons related to Adam’s past business interests. Negotiations have been ongoing for several years and the petition is subject to legal challenge as his advisers are working towards reaching an agreement.”

Afriyie, whose entry in the latest register of MPs’ financial interests reads simply “nil”, added: “I will of course pay any tax that is due.”

A spokesperson for HMRC said: “We do not comment on identifiable taxpayers.”

Once touted by friends as a possible future leader, Afriyie was behind a rebel Tory plot to force David Cameron to hold an EU referendum before the 2015 election, arguing he would not be able to sleep at night if the public were not given a say on the issue before the vote. He was also rumoured to have been behind a plan to oust Cameron in 2013.

Owen Paterson’s North Shropshire constituency is up for grabs, after he resigned following a furore over his attempts to avoid suspension from the House of Commons following a lobbying scandal.

North Shropshire is one of the safest seats in the country for the Conservatives, with a majority of 22,949. They are expected to hold the seat but the vote is expected to be held this side of Christmas as the Tories are not keen for a campaign to drag on and allow any opposition candidates to build up steam.

The other byelection likely to take place in December is the Old Bexley and Sidcup seat of former minister James Brokenshire, who died of cancer last month. The seat is also considered extremely safe, with a majority of 18,952.

Opposition parties have said they will not contest the Southend West byelection prompted by the killing of David Amess last month, out of respect for his memory. A fourth byelection is possible in Leicester East, the seat of the former Labour MP Claudia Webbe, after she was found guilty of harassment, including a threat to use acid against a female friend of a partner. She is planning to appeal.

Creditors can ask a court to make someone bankrupt if they owe at least £5,000. The court order usually lasts a year, after which the person is “discharged” and won’t have to repay the debts covered by the bankruptcy. Between 800 and 1,500 people are declared bankrupt each month in the UK, with thousands more subject to individual voluntary arrangements (IVAs).

Several former MPs have previously been declared bankrupt, including Neil Hamilton, a former Tory MP, now leader of Ukip, Jane Griffiths, a deselected Labour MP, and the former Labour MP Jim Devine, who was convicted of expenses fraud. In the more distant past, members of the Tory party were in the 1990s accused of clubbing together to bail out an MP threatened with bankruptcy to avoid the prospect of losing a seat.
#Boris Johnson  #Johnson
Add Comment