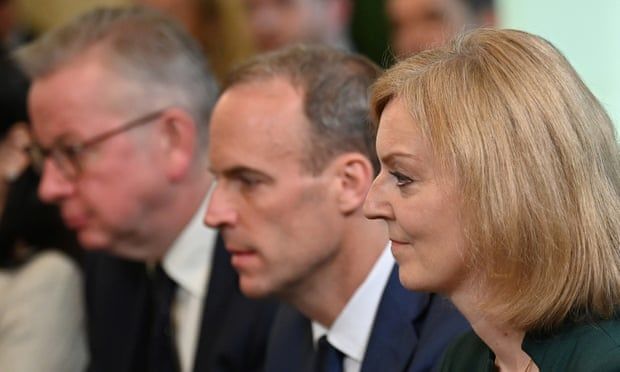 Analysis: Strength of attacks suggests they come from strong belief that frontrunner’s policies are wrong
There has been no shortage of cabinet big beasts willing to place their careers on the line for the failing Tory leadership campaign of Rishi Sunak. Michael Gove, Dominic Raab and Matt Hancock – not to mention Sunak himself – have not held back in their aggressive criticism of Liz Truss.

Traditionally, in the dying days of a leadership contest, some of the animosity dissipates as the likely losing candidate assesses their prospects of a job in a new administration. However, Sunak and his supporters have been vehement in their attacks on Truss’s economic policies, with the strength of their criticism increasing in recent days.

Sunak has said the foreign secretary wants to “have her cake and eat it” and would plunge the country into an inflationary spiral; Gove has claimed Truss is on a “holiday from reality”; and Raab has suggested her plans for tax cuts are a “suicide note” with the wider electorate. Another of Sunak’s key supporters, Kevin Hollinrake, said Truss’s failure to deal with the energy crisis by instead pursuing tax cuts could lead some of the poorest Britons to end up “on the streets”.

Some will have their own motives and little to lose. In Gove’s case, Truss and Boris Johnson have made clear they have little love lost for him.

Raab – who was succeeded by Truss as foreign secretary – is thought to have a fractious relationship with her, despite them having previously co-authored a book.

But Sunak himself could have been offered a job, and was mooted as a possible health secretary. On Monday, however, he strongly signalled he would turn down such a role, mindful of the difficulty of working in a cabinet for someone whose views were too different.

Given the strength of some of the attacks and weak chance of success, many of the pronouncements coming from Sunak’s camp do appear to come from strong personal belief that her policy prescriptions are plain wrong.

One former Tory leadership candidate said this level of vitriol was “unprecedented and will be extremely difficult to heal”. Other Conservative MPs are reserving their ire for Johnson for refusing to leave No 10 earlier, necessitating a long and drawn-out battle.

For Truss, the strength of the internal opposition could also be significant if she wins power as expected. Her top team of fervent supporters is largely from the right of the party, apart from a few outliers such as Tom Tugendhat, a former contender, and Robert Buckland, who switched from supporting Sunak as Truss’s lead became larger.

That leaves a fairly sizeable group of former cabinet ministers and potential critics on the backbenches observing her economic plans with a sceptical eye. They have been saying that unfunded tax cuts and insufficient help for the poorest will backfire, while team Truss has been keen to play down the need for “Gordon Brown-style handouts” and the likelihood of recession.

If the UK’s financial and energy situation seriously worsens over the winter, some of the blue-on-blue political warfare may continue, with team Sunak having laid out an alternative plan, and Truss likely to blame her former rival for his economic stewardship during the past few years. The economic divisions in the Conservatives seem only likely to continue.
#Boris Johnson  #Dominic Raab  #Johnson  #Raab
Add Comment